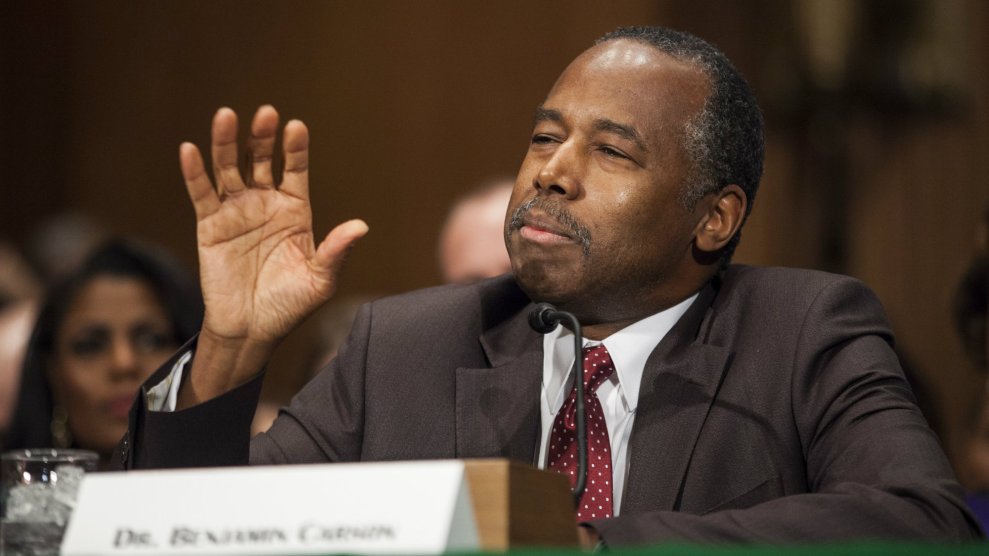 After his 2016 presidential bid failed, Ben Carson acknowledged he didn’t have enough experience to run a federal agency. ¯\_(ツ)_/¯ Nonetheless, after he became president, Donald Trump tweeted that the famous retired neurosurgeon might be his nominee to run the Department of Housing and Urban Development, the $41 billion agency of more than 9,000 employees that oversees housing and urban issues, including maintaining public housing, insuring mortgages, and enforcing fair housing laws.

I am seriously considering Dr. Ben Carson as the head of HUD. I've gotten to know him well–he's a greatly talented person who loves people!

For Trump, Carson’s greatest qualifications may have been that he is black and has a heartwarming story about growing up poor with a struggling mother in Detroit. Within four months of his tweet, Carson was confirmed as HUD secretary in March 2017.

An unusually large number of scandals and turnover in the White House has characterized the first two years of the Trump administration. Remember when Tom Price was the head of Health and Human Services? He resigned after just seven months on the job when Politico reported that the former Georgia representative had been using taxpayer money to fund trips on private jets. There were many other examples of scandalous behavior by Scott Pruitt, former chief of the Environmental Protection Agency; Commerce Secretary Wilbur Ross; Rob Porter; Anthony Scaramucci; and, most recently, Interior Department head Ryan Zinke, who submitted his resignation after a questionable land deal in his hometown. Then there were those who resigned or were forced out, like former Attorney General Jeff Sessions, Chiefs of Staff John Kelly and Reince Priebus, and General James Mattis, who recently handed in his resignation after disagreeing with the president on pulling out of the war in Syria.

Through it all, Carson has flown under the radar.

That doesn’t mean he’s been entirely free from scandal. In early 2018, the New York Times reported that his office had spent $31,000 on a new dining set. Federal law requires that departments get congressional approval for office redecorating that exceeds $5,000, which no one at HUD did. But that was the rare moment when the HUD secretary was in the news at all—and that includes for his work at the department.

“As Scott Pruitt’s and Ryan Zinke’s outlandish corruption has filled the headlines, Ben Carson has largely avoided the spotlight,” Austin Evers, executive director of ethics watchdog group American Oversight, told Mother Jones in an emailed statement. “He’s so far been able to escape serious consequences for the nepotism and incompetence that he’s allowed to run rampant at his agency, but with a Congress that’s intent on conducting oversight, that’s probably going to change.”

Here are five places where they could start:

1. Too much family involvement

In the summer of 2017, Ben Carson’s son, Ben Carson Jr., may have run afoul of some federal ethics laws when he and his wife, Merlynn Carson, invited their business associates to a HUD “listening tour” in Baltimore. Carson Jr., co-founder of a private equity firm and chairman of a construction and engineering services company, connected his guests with HUD officials, joined HUD staff on conference calls about the tour, and copied his wife on email exchanges about the listening tour. According to the Washington Post, department lawyers tried to warn the HUD secretary that this shouldn’t happen. “I expressed my concern that this gave the appearance that the Secretary may be using his position for his son’s private gain,” Linda M. Cruciani, HUD’s deputy general counsel for operations, wrote in a memo. Carson responded by saying that his son and daughter-in-law did nothing wrong and that he would have the agency’s inspector general look into it.

This week, my family and I have been under attack by the media questioning our integrity and ethics. I have openly asked for an Independent Investigation to put to rest these unfounded biases.
Exodus 14:14

His wife, Candy Carson, who has written several books, including one called A Doctor in the House: My Life With Ben Carson, has also been involved in official HUD activity and attended official meetings throughout Carson’s tenure as secretary.

2. What are friends for?

The HUD secretary has also come under fire for appointing close friends to positions they may not be qualified for. For example, in May, Carson announced that 29-year-old Alfonso Costa Jr. would be joining HUD as deputy chief of staff in the office of the secretary. Costa’s father, Alfonso Costa Sr., is Carson’s best friend and a dentist and real estate investor who was convicted in 2015 for defrauding insurers of nearly $45,000. As Mother Jones reported, Carson stood with Castro Sr. and said he was “proud to call him my friend.”

3. Armstrong Williams is still around

Armstrong Williams, the conservative commentator and television station owner, has been a Carson booster since his stint as the retired neurosurgeon’s presidential campaign adviser. Williams has been embroiled in several scandals over the years: He has been the subject of claims of sexual harassment, and he failed to disclose that he was paid to promote former President George W. Bush’s No Child Left Behind Act on his radio show and in his syndicated columns in the 2000s. During the furniture set fiasco, Williams released an official statement to CNN from Carson that said the secretary was unaware of the dining set purchase. This was framed as an official response from the head of HUD, even though Williams is not an employee. He may not work there, but Williams is often at the agency, leading to questions about his precise role. In August, he wrote an op-ed in the Hill countering allegations from an Associated Press report that Baltimore, where Carson made a name for himself, is just not that into him anymore. His byline identified him as a spokesman and former adviser for Carson’s presidential campaign.

One part of the Trump tax plan involved giving tax breaks to businesses and developers willing to invest in underserved communities, projects that were called “opportunity zones.” The zones will be designated by the Treasury Department, but Trump named Carson the chairman of the White House Opportunity and Revitalization Council, which will oversee implementation of the plan. Earlier this month, Carson announced that by using “a powerful new incentive promoting private investment in distressed communities,” he planned to target some areas as “opportunity zones” where those investments could be funneled. But critics of the program have noticed that some of the zones that have received the designation are actually located in expensive neighborhoods in New York City and South Florida. According to NBC News, Trump’s New Jersey golf course is inside an opportunity zone, while Jared Kushner, the president’s son-in-law and adviser, owns properties in two Maryland opportunity zones and could benefit from the program. “Unless the Treasury Department quickly establishes regulatory guardrails,” Diane Yentel, president of the National Low Income Housing Coalition, said, “there is no guarantee that low-income people will benefit in any significant way, if at all, from opportunity zones.”

When Carson tried to spend five figures on a new dining set, Helen Foster was the chief administrative officer at HUD. According to the Washington Post, Foster had felt pressured to buy the expensive furniture set, so she lodged a complaint to her superiors at the agency. The ethics watchdog group American Oversight obtained emails Foster sent to her colleagues saying she was being subjected to “endless” questions about why she wouldn’t spend the money for the dining set. In an explosive resignation letter, Foster said HUD officials retaliated by demoting her to a simple clerical position with no real duties and portraying her as a liar. Addressing Carson and his deputy, Pam Patenaude (who resigned on Monday), Foster said that their staffers “lied to you, lied to the public, knowingly violated the law, and illegally punished me for doing my job for over a year.” Foster also alleged that a HUD official opened up a “specious management investigation” of a hostile work environment against her because of a reference to Game of Thrones in an email.

When asked about the situation while giving testimony in March, Carson said he did not retaliate against anyone. “Let me just say, I don’t know who this whistleblower is, all of that is news to me,” Carson said in response to a question from Rep. David Price (D-N.C.). “I would never be involved in repercussions to people like that.” The federal government has strong laws to protect workers from retaliation when they report issues.