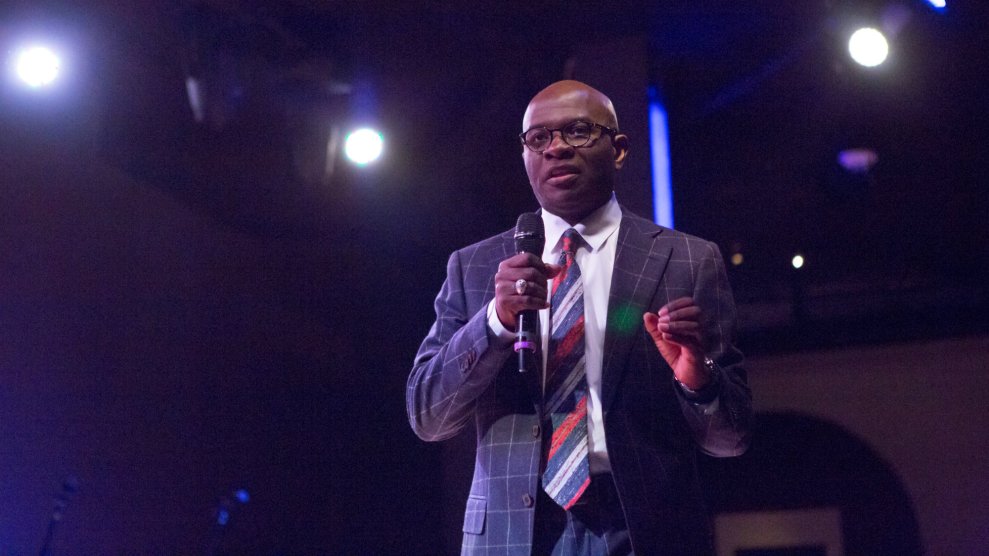 Armstrong Williams speaks at the annual DC Influencers Brunch at a downtown Washington restaurant in 2016.Sipa/AP

According to a current City Paper staffer, the paper’s editor, Alexa Mills, informed the staff on November 10 that Williams was interested in buying the publication. Later that morning, Williams and three associates arrived in the newsroom. “We learned he was coming in,” the staffer told Mother Jones, “and then he was suddenly there.” Williams went around the newsroom shaking hands with members of the editorial staff and asking about their journalism backgrounds.

The paper’s current owner, Nashville-based SouthComm, said in October that it had put City Paper up for sale. (SouthComm bought the paper in 2012.) City Paper was founded in 1981 and has a history of producing award-winning journalism and journalists. It has often covered important issues overlooked by larger media outlets in Washington. The paper’s owner has received interest from several potential buyers, but Williams is the first to meet the paper’s employees, the current staffer says.

If Williams succeeds in his effort, City Paper would be in the hands of an owner with a controversial past and a track record of blurring the lines between business, media, and politics. The 55-year-old Williams has faced allegations of sexual harassment and was embroiled in a scandal for promoting George W. Bush administration education policy on his radio program without disclosing that he had received payments from the government. More recently, Williams was accused of using television stations he owns to boost Carson’s 2016 presidential campaign.

Williams did not respond to a request for comment. City Paper editor Alexa Mills declined to discuss the sale. SouthComm Chief Financial Officer Bob Mahoney said in an email, “We do not comment about such matters,” adding, “All we will do is confirm the Washington City Paper, after many years of ownership by SouthComm, in a flagship city like Washington DC, is for sale.”

Williams has long been a fixture at the nexus of business, media, and Republican politics in Washington. He moved to the capital from his home state of South Carolina to intern for Sen. Strom Thurmond (R-S.C.), whose 24-hour protest of the Civil Rights Act of 1957 remains the longest filibuster in Senate history. Years later, Williams, who is African American, worked as an assistant to future Supreme Court Justice Clarence Thomas when Thomas chaired of the Equal Employment Opportunity Commission during the Reagan administration. Since then, Williams has carved out a uniquely Beltway career as a Republican jack-of-all-trades: adviser to politicians, host of his own TV and radio shows, and businessman of many ventures.

In his wake, Williams has left a string of controversies and scandals. In the 2000s, Williams admitted that he had received more than $180,000 from Bush’s Department of Education to promote the No Child Left Behind Act on his radio show and in his syndicated column but had never revealed those payments. The Government Accountability Office investigated Williams’ contract with the Department of Education and found that the agency had violated a federal ban on “covert propaganda.” Williams admitted no wrongdoing but repaid $34,000 of his contract.

In 1997, Williams was sued by by a former producer of his radio show who alleged that Williams had kissed and fondled him repeatedly for nearly two years. Williams denied the allegations, and the case was later settled.

Last year, Williams was sued for sexual harassment and retaliation by Charlton Woodyard, a former sales employee at a Jos. A. Bank men’s clothing store in Washington’s Union Station. The suit alleged that Williams tried to “control Mr. Woodyard financially, professionally, and emotionally” and that Williams “abused his power to attempt to exploit [Woodyard] sexually.” According to Woodyard’s complaint, Williams once asked Woodyard to join him for workouts at a local gym:

Williams denied the allegations. He told the Washington Post that Woodyard’s suit was financially motivated. In a subsequent court filing, Williams admitted making certain comments described in Woodyard’s suit but disputed “the context and characterization of the allegations as editorialized in the [complaint] and on that basis den[ied] them.” The case was settled confidentially late last year.

Williams and his scandals have long been fodder for City Paper reporters. In 1995, reporter David Plotz wrote a lengthy and biting profile of Williams, mocking his self-affixed nickname “Meteor Man” and detailing his role in the campaign countering the allegations that Thomas had sexually harassed Anita Hill. The paper covered the 1997 lawsuit in an 8,000-word piece by reporter John Cloud. The paper also reported on the 2016 lawsuit.

This September, the paper’s “Loose Lips” columnist published a lengthy interview with Williams, which included his thoughts on what “fake news” means:

“It’s when you don’t agree with the reporting, especially when it’s about you. Listen, most journalists work long and hard checking out sources to get the story right. I think most journalists have integrity. You can always have situations like with CNN. But I think for the most part, 80 percent of what’s printed is accurate.”

A longtime friend of Carson, Williams drew considerable attention for his role as an adviser to Carson’s failed bid for the 2016 Republican presidential nomination. As Mother Jones recently reported, a former Carson campaign staffer recalled multiple instances when Williams used his business interests—he owns multiple TV stations in partnership with the pro-Trump Sinclair Broadcast Group—to boost the fortunes of the Carson campaign.

The current City Paper staffer says the details of Williams’ past weren’t widely known in the newsroom, but once staffers became more familiar with his history, “panic set in.” The staffer adds, “We knew he was a conservative TV host, and some people didn’t like that. Accepting [government] money to promote policies? That’s not a person who should own a newspaper.”