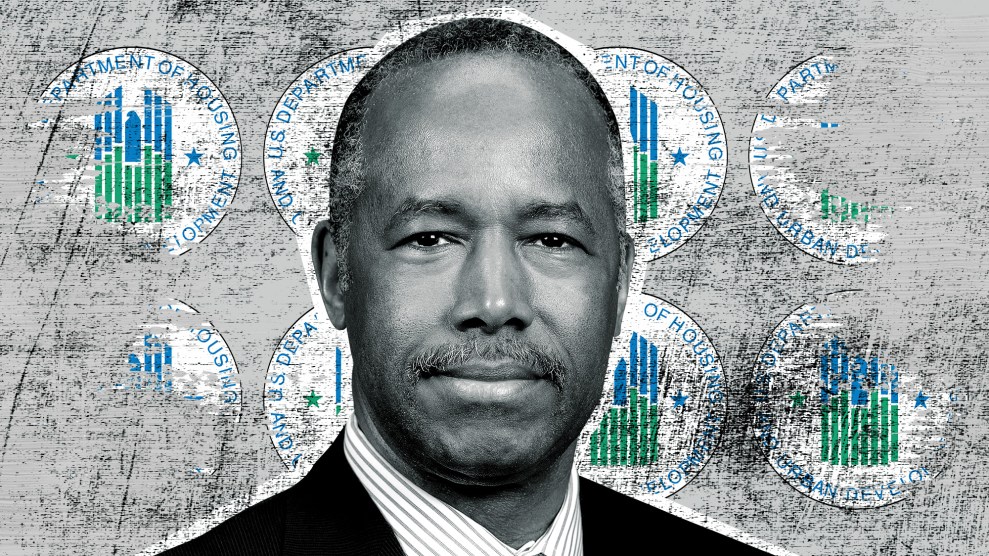 Mother Jones illustration; US Department of Housing and Urban Development

Ben Carson was an unlikely choice to take over the nation’s housing department. The neurosurgeon turned failed GOP presidential candidate reportedly rejected President Donald Trump’s initial offer to serve as secretary of health and human services but signed up when offered the housing gig. “Our inner cities are in terrible shape,” Carson said at the time. “And they definitely need some real attention.” But so far, Carson is best known for getting trapped in an elevator, bumbling through a series of scandals, and ordering a very expensive dining-room table.

November 15, 2016: After reports that Carson turned down an offer from Trump to lead the Department of Health and Human Services, his business manager and confidant Armstrong Williams tells the Hill, “Dr. Carson feels he has no government experience, he’s never run a federal agency. The last thing he would want to do was take a position that could cripple the presidency.”

April 12, 2017: Firefighters rescue Carson and six other officials from a broken elevator in an affordable housing complex in Miami.

May 3, 2017: The New York Times quotes Carson as saying that compassion means not providing “a comfortable setting that would make somebody want to say: ‘I’ll just stay here. They will take care of me.’”

December 23, 2017: A federal court strikes down Carson’s attempt to undo an Obama-era program that makes it easier to use housing vouchers in affluent neighborhoods.

February 27, 2018: The Guardian reports that a HUD senior career official was demoted and replaced with a Trump appointee after refusing to approve Carson’s request for a $31,000 dining set. The legal limit for office decor is $5,000.

March 5, 2018: A HUD internal memo indicates the agency will remove anti-­discrimination language from its mission statement. The same day, the New York Times quotes Carson as saying, “There are more complexities here than in brain surgery. Doing this job is going to be a very intricate process.”

May 8, 2018: Housing advocates sue Carson and HUD for delaying the Obama-era anti-discrimination rule.