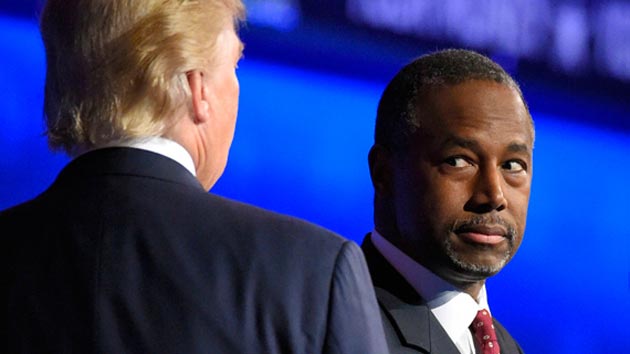 Update: Ben Carson released a statement responding to articles by Mother Jones and the Associated Press about his business relationship Alfonso Costa. “Al Costa is my best friend. Al Costa is my very best friend. I know his heart. I am proud to call him my friend. I have always and will continue to stand by him. That is what real friends do!”

In his 2013 book America the Beautiful, Ben Carson, a retired neurosurgeon who now is at the front of the GOP’s 2016 presidential pack, proposed a simple plan to reduce health care fraud: the Saudi Arabian Solution. “I would not advocate chopping off people’s limbs, but there would be some very stiff penalties for this kind of fraud, such as loss of one’s medical license for life, no less than ten years in prison, and loss of all of one’s personal possessions,” Carson wrote. Yet several years earlier, Carson sent a letter to a federal judge in Pittsburgh pleading for leniency in the case of his best friend Alfonso Costa, a dentist in the Pittsburgh area who had pleaded guilty to federal charges of health care fraud. And at the time Carson was seeking mercy for Costa, he had close business ties with Costa’s real estate firm, Costa Land Management—a fact he neglected to mention in his letter to the judge.

Carson and Costa have long been tight. They vacation together, and Carson holidays at an Italian resort villa owned by Costa’s company. Costa is president of the Pittsburgh chapter of the Ben Carson Scholars Fund, which awards $1,000 college scholarships to students who demonstrate good character and strong academics. And Costa’s real estate development firm helps to oversee a lucrative investment for Carson and his wife, one that last year netted the Carsons between $200,000 and $2 million, according to the GOP candidate’s financial disclosure forms.

Carson, who retired from medicine in 2013 and has spent recent years giving speeches and selling books, is worth at least $8 million. A significant portion of his wealth comes from companies tied to Costa’s real estate firm that own a lucrative property in the Pittsburgh area. The Carson campaign did not respond to a request for comment about his business relationship with Costa. But Carson’s spokesman Doug Watts told the Associated Press: “I will confirm they are best friends and that they do hold business investments together.”

Carson and Costa met in the 1990s, becoming fast friends with the Pittsburgh-based oral surgeon who had developed a lucrative side business as a real estate investor and developer. In 2004, Costa created a Pittsburgh chapter of Carson’s charity, joined the national board, and began working closely with Carson. Three years later, when Carson and his wife invested in commercial real estate in the suburbs of Pittsburgh, Costa and his firm were closely associated with the entities the Carsons used to purchase an office building.

That year, Carson created two limited liability corporations in Pennsylvania—BenCan LLC AND INBS LLC—that listed Costa’s residence at that time as their address. (And they still do, though Costa sold that house in 2011.) Shortly after their formation, the companies were used to purchase an office building in Mount Lebanon, a Pittsburgh suburb. Real estate records list Carson as the owner of BenCan and his wife Candy as the owner of INBS; the couple jointly purchased the building for $3 million, $2.4 million of which they borrowed. On both the mortgage and the deed, Carson and his wife state their official addresses as Costa’s office. Many of the publicly available documents associated with this property, including lease agreements, are signed not by Carson or his wife, but by various executives from the Costa Land Company, including the outfit’s chief operating officer, Sarah Piccione. Neither Costa nor Piccione responded to requests for comment.

Carson’s personal financial disclosure, which he was required to file as a presidential candidate, notes that his investment in BenCan is worth between $1 million and $5 million and his wife’s LLC is valued at $1 million or more. Though Carson has served on various corporate boards and earned millions through his books and speeches, the BenCan and INBS investments represent at least a quarter of the Carsons’ net worth. According to Carson’s disclosure, he and his wife earn between $200,000 and $2 million a year in income from their LLCs. (Candidates provide their income and the value of assets and liabilities in ranges). The Carsons’ property investment has done well, with insurance company Allstate leasing office space the entire time the Carsons have owned it. More recently, the Carsons have added a drive-through ATM to the property.

Around the time Carson began working with Costa’s company in 2007, his friend ran into trouble with the feds. Costa had founded a successful dental practice in the Pittsburgh area in 1986, and he soon began investing in real estate. By the late 1990s, his property dealings were so lucrative that he decided to move out of dentistry and focus on real estate full time. In 1998, Costa agreed to sell his practice to another oral surgeon, Roberto Michienzi, but he continued to work at this office until 2001 for a $10,000 monthly fee.

In late 2007, Costa and Michienzi, were both charged with health care fraud. They were charged with defrauding insurance companies, including Blue Cross Blue Shield, of $44,000 through a scheme that spanned 1996 to 2001. Prosecutors alleged that the two men lured in new patients by waiving certain out-of-pocket fees—for example, copayments—and then over-billed the insurance company for care that they didn’t provide to make up the difference.

“The false over-billing for the dental services actually provided simply offset the cost of these inducements, and thus effectively caused insurers to fund the expansion of the business,” a memo from the Department of Justice noted.

Costa and Michienzi both pleaded guilty. But in the sentencing phase, contrasting stories emerged. Costa’s attorney insisted that nearly all of the $44,000 in fraudulent billing was the fault of Michienzi and only $180 was attributable to Costa. Michienzi, who could not be reached for comment, and his family and friends placed the blame squarely on Costa.

“I wish there was a class in dental school for the young naive graduating dental student of what to look out for so they are not led astray in the wrong direction by others, but there was not for my brother or I,” Joseph Michienzi, who is an oral surgeon, wrote the judge in support of his brother’s case. “Roberto came to trust a mentor who he believed was his friend, but had ulterior motives and not his best interest in heart that in the end would dishonor my brother and the system.”

Another supporter described Michienzi as “a victim of guile.” An attorney who knew Michienzi and wrote to the judge on his behalf described him as “easily persuaded” and trusting, “a follower who is now held responsible for his actions.”

On the other side, Costa had a slew of associates who sent letters to the judge attesting to his good character and his good works—most notably, his role with the Ben Carson Scholars Fund. His two star supporters were Carson and former Pittsburgh Steelers running back Jerome Bettis, an honorary board member of Carson’s nonprofit.

Carson penned a gushing letter of support for his friend. He wrote that “next to my wife of 32 years, there is no one on this planet I trust more than Al Costa.” He also testified at Costa’s sentencing in March 2008. At that hearing, Carson told the judge: “Well, I feel very strongly, obviously, about Al Costa. You know, he’s one of my closest, if not my closest, friend. We were, we became friends about a decade ago. We found that, you know, our value systems were almost identical.” Carson said that if Costa were to be incarcerated, it would harm the Carson charity and possibly force the Pittsburgh chapter to shutter.

Michienzi, who had agreed to cooperate against Costa, was sentenced to three years of probation and ordered to pay $44,000 in restitution. Costa received a tougher sentence: three years probation, one year of house arrest, 100 hours of community service, and he was ordered to pay restitution of $44,000 and a $250,000 fine. Costa later completed 125 hours of community service—working for Carson’s charity. Costa’s dental license was later revoked and Michienzi’s was suspended.

Carson never accepted—at least, publicly—that his friend had done something criminal. He insisted the case against Costa was unfounded. In the same book in which he excoriated doctors who commit health care fraud, Carson claimed that he was “aware of numerous, patriotic, humanitarian Americans who have been severely abused by components of our justice system, including one of my closest friends.” Carson does not name Costa but describes the case of a talented Italian-American oral surgeon who made wise investments in real estate.

As his real estate business increased, the available time he had for practicing oral surgery decreased, and he sold his practice to a colleague. Unfortunately, that colleague was later accused of Medicare fraud, but he did not have deep pockets—so the investigating agents came after my friend, even though he no longer owned the practice.

In Carson’s account, investigators found only one improper billing, for $180. Carson theorized that Costa was targeted by petty federal agents who envied his wealth:

My friend owns a spectacular home, a Manhattan penthouse, two Ferraris, and a European villa. However, given the fortune he has amassed, he lives modestly compared to the lifestyle he could have if he so desired. I believe the lead agent was either jealous of his success or incorrectly concluded that he had organized crime connections that produced his wealth.

The publicly available court records for this case contain no mention of organized crime, but they are clear about Costa and Michienzi’s culpability in the fraud scheme, to which they both admitted.

Costa remains a fixture in Carson’s orbit. He continues to hold a prominent role with the Carson Scholars Fund as president of the Pittsburgh chapter and his wife Mary Costa is a board member, and hosts major fundraising events for the charity at which Carson appears (as does Bettis). Once Costa was released from house arrest, he and Carson resumed their travels together. The website of the Costa Land Company touts Carson’s frequent stays at Villa Lilly, Costa’s luxury property on the Amalfi coast—what Carson has called the “most beautiful spot on earth.” As he climbed the polls in September, Carson announced he was taking time off from the campaign trail to promote his book. But first he decided celebrate his 64th birthday—with a week at Costa’s Italian villa.