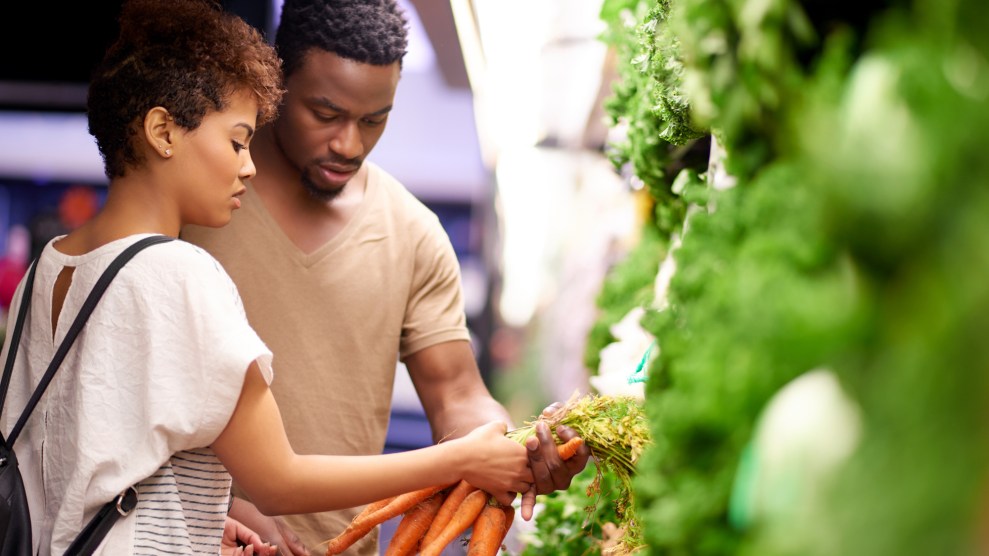 Beyond the 800,000 federal workers now living without a paycheck, who else is taking a hit from President Donald Trump’s attempt to extract $5 billion from Congress for a wall along the US-Mexico border by partially shutting down the government?

One disturbing answer: anyone who eats. That’s because the Food and Drug Administration, which monitors the safety of most of the non-meat food supply, is now operating with a skeleton crew. The Department of Health and Human Services, which operates the FDA, reports that 41 percent of the FDA’s 17,397 employees have been furloughed by the shutdown. HHS’s website notes that the food safety agency will “continue vital activities” like managing “high-risk recalls” of tainted food. But it adds that the FDA will be “unable to support some routine regulatory and compliance activities,” including “most food related activities” like “routine establishment inspections.” Oof.

FDA director Scott Gottlieb says the agency may bring back inspectors as early as next week “to resume inspections of high-risk facilities, which handle foods such as soft cheese or seafood, or have a history of problems,” the Washington Post reported Wednesday.

That’s not the only way the shutdown has negative implications for the dinner table. Here are three more groups that have landed in the crosshairs of the president’s agenda:

In his first draft budget as president back in May 2017, Trump proposed a 25 percent cut for the Supplemental Nutrition Assistance Program (SNAP), or food stamps, the nation’s premier food aid program, which currently serves 39 million people, nearly two-thirds of whom are children, elderly, or have disabilities. The proposal also included a nearly 20 percent reduction for the Women, Infants, and Children (WIC) program, which provides food aid to 7 million new mothers, infants, and children under five years old. Although Trump never pushed those aspirations through Congress, his Republican allies tried hard to ramp up work requirements for SNAP recipients in the farm bill. After that failed, the Trump administration began an ongoing effort to do something similar through the executive rule-making process.

The shutdown hasn’t halted funding for SNAP and WIC, but it has plunged it into uncertainty. In the first week of January, Politico reports, the Department of Agriculture warned that “funds for the Supplemental Nutrition Assistance Program were likely to run out in February if Congress didn’t act, an outcome that would have led to a sharp cut in benefits for millions of low-income Americans who rely on the program to help them pay for groceries each month.” The administration pulled back from that threat Tuesday afternoon, telling Politico it would use an “obscure provision in the last spending bill” to fund the program through February. “Officials said they will look for other options to fund benefits for March, if needed, but they hope Congress will be able to restore government funding by that point,” the story added.

“If the shutdown lasts for several weeks, families will be forced to make hard choices about how to feed their newborn babies,”  reported the National WIC Association.

The WIC program, which is administered with federal funding through states, is in a similarly precarious situation. In a recent statement, the National WIC Association reported that “state agencies have enough reserve funding to remain open during the shutdown if it does not become protracted.” But the group added: “If the shutdown lasts for several weeks, families will be forced to make hard choices about how to feed their newborn babies.”

Although large-scale commodity farmers supported Trump by a wide margin during the 2016 election and have largely stuck with him since, his presidency has presented them with a tough row to hoe.

For one thing, the shutdown has thrown a wrench into Trump’s so-called tariff bailout—the $12 billion program meant to compensate producers of soybeans, pork, and a handful of other commodities for losses they incurred from Trump’s trade war. Now, farmers who applied for payments before the shutdown are being paid on schedule; those who didn’t will have to wait until the government reopens for compensation, because the office that administers the program, the Farm Services Agency, is shuttered. According to the Post, “many farmers had late harvests this year” and were unable to apply for aid before the shutdown.

Until recently, farmers in that situation had to worry that they would never receive funds, because a January 15 deadline for registration was in place, and there’s little hope the government will reopen by then. But in a Tuesday press release, the USDA announced it would extend the application deadline for a period of time equal to the number of business days its offices were closed once the shutdown ends.

The shutdown has also mothballed a crucial tool for farmers now planning next year’s cropping decisions: the USDA’s plethora of economic indicators and projections for big commodities like corn and soybeans. The reports, which detail stockpiles of crops left over from the previous year and projections of harvests from competing nations like Brazil and Argentina, help farmers figure out what and how much to plant next year.

Farmers are “being asked to make planting decisions in an informational vacuum,” one policy analyst said.

“They’re being asked to make planting decisions in an informational vacuum,” Steve Suppan, senior policy analyst at the Institute for Agriculture and Trade Policy, told the Post. “Unless you’re a very large operator, it’s got to be very difficult right now to do farm management planning with any kind of confidence at all. The shutdown aggravates that.”

The USDA has delayed publication of several economic reports on commodity stockpiles and other agriculture data, which help farmers estimate the amount of production necessary for the following harvest. The USDA’s reports are also used by investors to gauge whether to buy or sell commodities futures. Lack of information can add volatility (wild price swings) to an already choppy market, further complicating farmers’ crop decisions.

As I noted back in May 2018, Trump’s aluminum tariff raised hackles in the US beer industry because both mega-conglomerates and craft brewers rely heavily on cans. Since cans make up a pretty tiny portion of production costs, pricier aluminum didn’t shave much from the industry’s bottom line. The industry members hit the hardest, I found from talking to industry experts, are small brewers. “Say a small brewery buys a million cans up front,” Bob Pease, president and CEO of the Brewers Association, the craft industry’s trade association, told me. “An extra penny per can means $10,000—for small or new breweries, that could mean laying off an employee, or delaying an expansion.”

The shutdown has handed craft brewers a new burden. Before breweries—or any makers of alcoholic beverages—can roll out a product with a new label, said label must be approved by the Alcohol and Tobacco Tax and Trade Bureau. And that agency has been shuttered. Beverage companies can still apply online for approval, but “submissions will not be reviewed or approved until appropriations are enacted,” the agency’s website states. That doesn’t mean much to companies that lean on established megasellers like Bud Light and Corona. But crafters thrive by rolling out new styles (think brut IPA) and seasonal offerings, which require new labels and thus federal approval.

DCist reports that one Washington, DC, brewer, Atlas Brew Works, is “stuck with a whole tank of IPA brewed with fresh apricots that may never hit shelves” because approval for its label is languishing. DCist notes that the craft-beer rating site BeerAdvocate “added more than 70,000 new beers to its database in 2018—meaning that new beer is being released all the time, and at a high volume.” That means that nationwide, an average of around 190 new beers hit the shelves every day. The shutdown started on December 22. It’s anyone’s guess how many great brews will go bad in the tank before the government reopens.