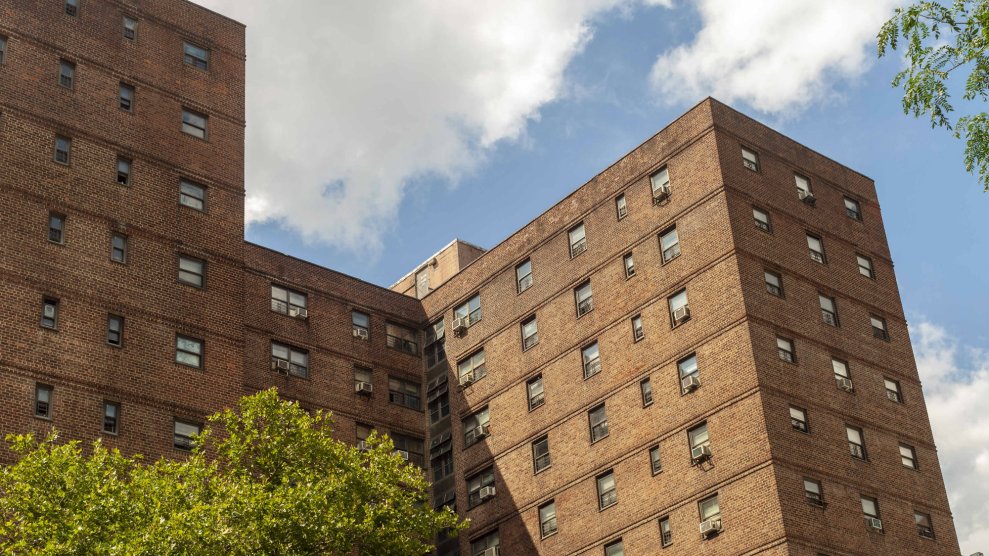 With the government shutdown in its third week with no end in sight, millions of Americans who rely on federal assistance for housing are in jeopardy.

President Donald Trump’s refusal to sign a spending bill that does not include funding for a wall along the southern border has caused approximately 380,000 federal employees to be furloughed—prevented from working or collecting a paycheck. Among them are the overwhelming majority of the nearly 7,500 employees of the Department of Housing and Urban Development, which will not be inspecting public housing, making repairs, or assisting victims of natural disasters for the duration of the shutdown.

“The needless government shutdown has put the lowest-income residents at risk,” said Ellen Lurie Hoffman, federal policy director at the National Housing Trust, in a letter to Congress. “This threatens seniors, people with disabilities, and families who are struggling to make ends meet.”

Ninety-five percent of HUD staffers have been furloughed. The department, which is headed by retired neurosurgeon Ben Carson, administers programs vital to low-income Americans. These include the Federal Housing Administration, which is the world’s largest home insurer, and programs that assist low-income renters and fund locally managed public housing agencies.

During the shutdown, HUD will not be inspecting any public housing authorities. The 47-person Office of Lead Hazard Control and Healthy Homes will only have two employees on hand to answer questions. Some repairs for public housing require approval from the agency, which won’t be granted during the shutdown. “HUD staff aren’t available to approve some of the repairs,” says Diane Yentel, president of the National Low Income Housing Coalition. “This puts low-income tenants at risk.”

And if there is a natural disaster, the agency won’t be able to assist. During the recent wildfires in California, HUD made resources available to renters and homeowners. The contingency plan states that public housing agencies should call the Federal Emergency Management Authority in case of a natural disaster emergency.

“The longer the shutdown continues, the more low-income people will be hard hit,” Yentel says. Local housing agencies rely on federal funding for capital and operating costs. They have enough funds to keep operating through the end of the month, but if the shutdown stretches into February, the situation could get precarious, particularly in smaller cities and rural areas that rely even more on the federal government.

Even before local housing agencies run out of cash, the impact of the shutdown is already being felt. Federal contracts for the Project-Based Rental Assistance program, which subsidizes rent and utilities for 1.2 million low-income families, expired on January 1, and HUD couldn’t renew them because the department was mostly shut down. (According to the Washington Post, HUD staffers hadn’t realized the program was about to expire.) Last week, HUD officials sent out emails to hundreds of landlords asking them to use reserve funds to prevent affected renters from being evicted. About 1,150 contracts have expired, and more than 1,050 more will expire if the shutdown continues into February.

~1,150 contracts for existing affordable housing are under suspension – HUD doesn’t have $ to renew. This puts about 80,000 low income people – mostly seniors or people w/disabilities w/ income less than $13,000 per year, at risk of losing their homes. 2/

“If this goes into February 1, landlords will start to go berserk,” Adrianne Todman, CEO of the National Association of Housing and Redevelopment Officials, told NBC News. “They, too, have bills to pay.”

Even if local housing authorities remain operational, a shuttered HUD can prevent them from moving needy families into subsidized housing. “They may not have the staff or capacity to issue new vouchers to people on the waiting list,” Yentel says. Waiting lists for public housing can be years long.

Shutdowns in the past have spurred the same fears. In 2013, the federal government shut down for 16 days over a Republican effort to defund the Affordable Care Act. On the eve of the shutdown, the District of Columbia Housing Authority warned that it had only 30 days of funding. “Imagine if we could not pay our landlord partners, over 3,000 of them to house over 13,000 DC families, or could not make repairs to our units?” Todman, who led the DC Housing Authority at the time, tweeted.

HUD’s website has a message letting visitors know the agency is closed, with links to the contingency plan and to resources for employees. Whenever the government reopens, the agency has outlined a grand plan for welcoming back its employees, which includes a video and tweet from Carson that will be “something favorable about civil service employees.”

Meanwhile, Congress and Trump are nowhere near finalizing a deal to open the government. Trump has not relented on the border wall funding, and said the government may remain closed for months or years. Democrats have pledged not to give the president a single dollar for the wall. HUD houses many of the country’s poorest and most vulnerable residents. Yentel said in a tweet on Tuesday, “It’s incredibly reckless to risk their homes as perceived leverage for a border wall.”

We want to hear from you: What do you wish you better understood about the government shutdown? What would you like us to look into? Let us know your questions in the form below, send us an email at talk@motherjones.com, or leave us a voicemail at (510) 519-MOJO.