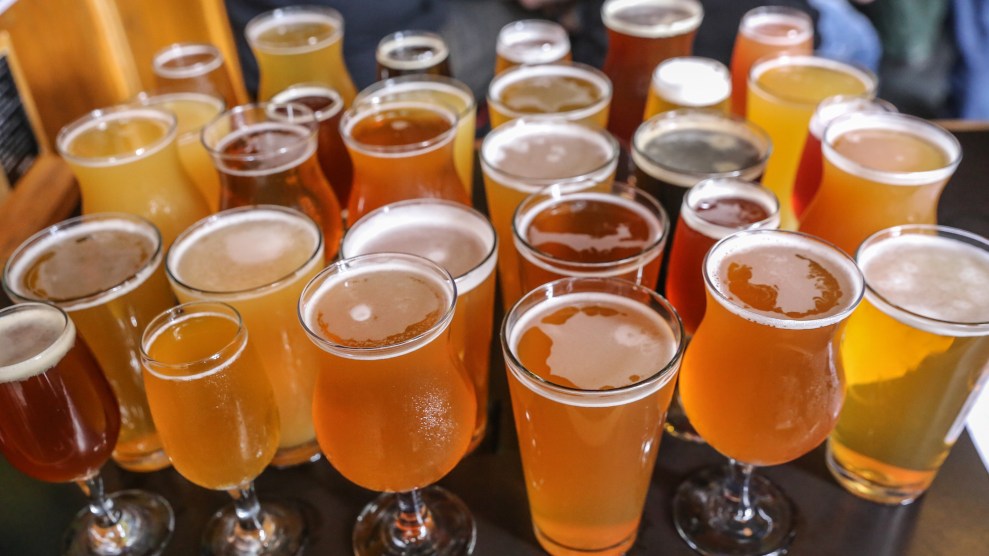 Since its emergence in 1935, the aluminum beer can has been a fixture on the US drinking scene. About half of packaged beer of the country’s two dominant mega-brewers—AB InBev (maker of Budweiser) and MillerCoors—comes in cans. And now their fast-growing craft competitors have discovered the allure of the aluminum vessel: About 17 percent of craft beer is now sold in cans, up from 2 percent in 2011.

So it’s no surprise that the beer industry is united against President Donald Trump’s plan to impose a 10 percent tariff on imported aluminum. Last week, Pete Coors, chairman of Molson Coors Brewing Co.—a global behemoth that owns the US-based giant MillerCoors—published a Wall Street Journal op-ed decrying the tariff. Coors, scion of a prominent right-wing Colorado brewing dynasty, is normally a Trump supporter. Back in June 2016, he co-hosted a $10,000-per-couple fundraiser for the then-upstart presidential candidate.

It’s no surprise that the beer industry is united against President Donald Trump’s plan to impose a 10 percent tariff on imported aluminum.

“Since January, as the president’s tariff talk intensified, aluminum prices have risen in the US, even for domestic aluminum forged from scrap,” Coors complained in the Journal. All told, he added, dislocations to the US aluminum market triggered by the tariff could cost cost his company “tens of millions of dollars each year.”

That amount of money is tiny in the grand scheme of the Coors conglomerate’s $1.4 billion in annual profit. Though the Beer Institute, the trade group that represents big producers like MillerCoors, claims the industry’s annual hit will total $347 million, and “put breweries at a competitive disadvantage” to competitors like wine and spirits, which don’t rely much on cans.

What about your favorite craft beer? I asked Brad Farbstein, founder and owner of Real Ale, a brewery in Blanco, Texas, that’s popular in Austin. Real Ale started in 1996 as an all-bottle operation; in recent years, it has moved aggressively into cans. Farbstein says he opposes the tariff, but adds that the cost of aluminum in a typical six-pack is “pretty small.” The tariff probably won’t force the company to raise prices to consumers; instead, it will be absorbed by Real Ale’s profit margins without too much pain, he says.

But in the craft-brew world, Real Ale is an established mid-sized player. Bob Pease, president and CEO of the Brewers Association, the craft industry’s trade association, says the tariff will fall harder on small brewers. While the levy might translate to just a penny per can in added costs, craft brewers typically have to buy cans in massive volume to get the best price.

“For small or new breweries, that could mean laying off an employee, or delaying an expansion.”

“Say a small brewery buys a million cans up front,” he says. “An extra penny per can means $10,000—for small or new breweries, that could mean laying off an employee, or delaying an expansion.”

For economic reasons, more and more beer startups are relying in cans, Pease says: Setting up a canning facility is cheaper than setting up a bottling operations, and cans are cheaper than bottles per unit, too. Brewers Association data shows that small craft operations rely much more heavily on cans than their larger peers.

So while Trump’s trade machinations may not affect nationally or regionally available craft brands too much in the short term, they may squeeze your neighborhood brewery.