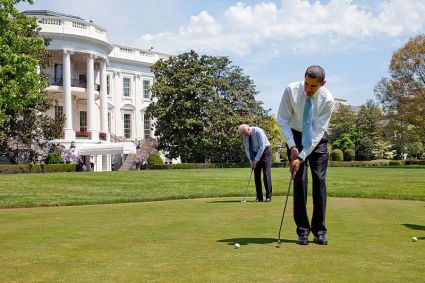 President Obama and Speaker Boehner are all set for their much-anticipated golf summit tomorrow. In addition to golfing, they’ll reportedly be getting down to some serious business, mixing in discussions on the debt ceiling and spending cuts with their handicaps. The odds that anything concrete will come of their time on the links appears remote, though just maybe it will help cool some of the personal tensions that have boiled up between them from time to time. Boehner, for one, views golf as a great bonding exercise. “Playing golf with someone is a great way to really get to know someone. You start trying to hit that little white ball. You can’t be somebody that you’re not because all of you shows up,” he told 60 Minutes in December.

Whether or not Obama and Boehner emerge from their outing any chummier, hopes should at least be high that the two can comport themselves with slightly more class than Bolivian president Evo Morales, whose “friendly” soccer match last year pitting the president and his allies against a team led by a former political friend turned adversary yielded this priceless footage. (And yes, that guy is President Morales.)