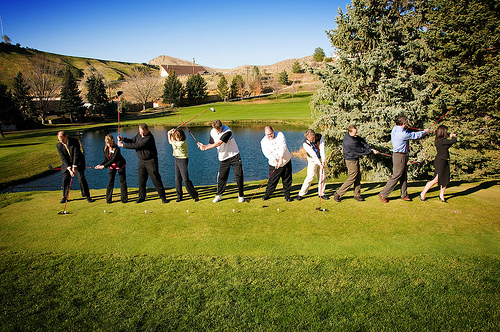 Each year, two familiar haunts on Washington political circuit—the Capitol Hill Club (GOP) and the National Democratic Club—host popular golf outings where members of Congress, their staffers, and other paying participants hit the links to raise money for the two clubs. The more big-name lawmakers who show up, enjoying for free a round of golf that usually costs $3,000 to $8,000, the better. But by letting lawmakers swing away and dine for free, are the clubs breaking House ethics rules?

That’s what one government transparency group, the Sunlight Foundation, is alleging. According to ethics rules, members of Congress and their aides aren’t allowed to play in golf fundraisers like the Capitol Hill Club’s and the NDC’s. (They are, however, cleared to play charity fundraisers, so long as they’re not for social and recreation clubs.) The two clubs skirt these rules by obtaining ethics waivers for lawmakers and their staffers, according to Sunlight, even though the House ethics handbook warns against giving out individual waivers.

Here’s more from Sunlight on the funny business with lawmakers attending golf tournaments that should be out of bounds for members of Congress:

“Two or three” members and the same number of staffers are expected to attend the Capitol Hill Club outing in Alexandria, fewer than usual, because of the event’s timing, right after the Independence Day recess, according to Lawson…

All year, members pay the clubs to host fundraisers for their campaigns and leadership PACs. This year there are over 500 invitations to Capitol Hill Club fundraisers and over 70 to the NDC and its next door townhouse in Party Time’s database of invitations.

The NDC has members, staffers, and lobbyists on its board of directors, according to its website. As of its 2008 tax return, the same was true for the Capitol Hill Club.

The exemption letter for the NDC is written specifically for the golf tournament, which is the only fundraiser by the club all year, Ehlman said. The Capitol Hill Club puts on three to six fundraisers per year and its exemption allows all of these events, Lawson said.