World Cup play started on Friday, and that seemed like a good excuse to finally read Franklin Foer’s How Soccer Explains the World. It’s not quite what I expected, but in a way it’s better than I expected because part of the book tackles a subject that’s long fascinated me: why the hell is soccer such a violent sport? Not the game itself, of course, but the fans. Why, unlike most other sports (and unlike all American sports), 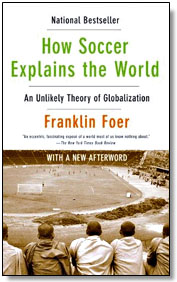 does it routinely inspire riots and drunken brawls and roving gangs of hooligans — and even the odd war or two? Ilya Somin suggests the obvious answer, namely that soccer is strongly associated with nationalism, but that can hardly be the whole explanation since local teams often inspire the same kind of behavior when they play crosstown rivals. David Post picks it up from there:

Another way to say what he’s saying: people around the world care about soccer in a way that is far deeper than the way most US fans care about their sports. It touches a much, much deeper chord, and, as a result, is much more bound up with all those things people care deeply about — religion, and politics, and honor, and the rest of it. I’ve said it before: soccer’s like life, and people care about it the way they care about their lives. Why that is so is a very interesting question — I believe it is inextricably tied in some way to the very nature of the game itself, but I can’t yet quite articulate the full theory for that. But to those of us who love soccer — all 2.75 billion or so of us — that’s not a bug, that’s a feature.

OK, but still: Why? National soccer teams inspire lunatic nationalism, but as Foer so colorfully describes, local teams routinely inspire lunatic ethnic, religious, racial, and political fury too. Why? Until fairly recently soccer was very much a working class sport, but it’s hardly unique in that regard. So what is it about soccer that seems to inspire not just loyalty or even fanaticism, but so often serious violence and (in much of the world) endemic corruption? Comments are open for uninformed speculation.