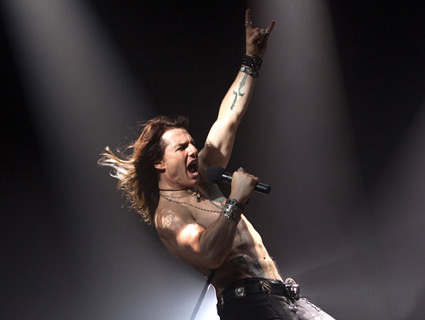 Tom Cruise being very shirtless in "Rock of Ages" (2012).Photo courtesy of <a href="http://rockofagesmovie.warnerbros.com/gallery.php">Warner Bros.</a>

Even taking into account spandex trousers, the aerobics craze, the rise of Anthony Michael Hall, the “anti-bureaucratic revolution,” Psycho III, the crack epidemic, Reagan death-squads, and Muppet Babies, there is absolutely nothing I dislike more about the ’80s than the music.

That low, dishonest decade of hit singles rubs the nerves raw with its extraordinary sacklessness. The deafening double-barrel thud of Scorpions and Whitesnake is alone enough to define the mountainous waste-of-flesh that was the Yuppie heyday. Music from the ’80s is the lunatic ex-wife of American pop-rock that will not stop dropping by America’s quiet suburban home to angrily demand joint custody of the country’s collective listening consciousness.

Which is why I was surprised to find certain parts of Rock of Ages so epically winning.

The film (an adaptation of the Broadway jukebox musical celebrating the national nightmare of hair metal) has the kind of plot that if you blink, you risk missing.

The damn thing takes place in Los Angeles in 1987. Sherrie Christian (played by ballroom dancer/thespian Julianne Hough) ditches the doldrums of rural Oklahoma and hightails it to LA in search of arena-rock stardom. Naturally, she crash-lands as a penniless waitress working at the Bourbon Room, a scuzzy, whisky-and-sex-sodden nightclub that’s run by a couple of ex-heroin addicts (Russell Brand and Alec Baldwin).

Sherrie falls in love with a bartender’s assistant named Drew (animal obsessee/actor Diego Boneta), who coincidentally is, too, hungry for fame. Patricia Whitmore (Catherine Zeta-Jones), an angry church-lady who goes off on Ayatollah-like rants, wants to shut them down. Tom Cruise crops up as a mega-shirtless rock star. Mary J. Blige shows up at some point to impart wisdom.

Everyone breaks into song often.

That lump of formula serves as a springboard for wild, inexplicably enjoyable song-and-dance numbers. Rock of Ages excels during its medleys and mash-ups, where the actors inject a great deal of infectious verve, and for which director Adam Shankman brings grin-inducing staging. For instance, this medley/mash-up of Night Ranger’s “Sister Christian,” David Lee Roth’s “Just Like Paradise,” and Poison’s “Nothin’ but a Good Time” seduces you with its fast-paced catchiness to the point that you don’t feel guilty about embracing the original songs’ plastic glamour.

Here’s a snippet of another one of RoA‘s mash-up beauties, this one of Twisted Sister’s godawful “We’re Not Gonna Take It” and Starship’s godawfuler “We Built This City“:

These scenes will indeed make you want to dance. A lot. Hell, I’m even willing to declare those musical numbers near-priceless. Alas, those moments are few and interminably far between. Most of the movie is occupied by narrative aimlessness, facepalm dialogue, botched comic timing, and lame, flavorless covers of lame, flavorless songs (see: Cruise phoning it in on Def Leppard’s “Pour Some Sugar on Me,” or everybody phoning it in for Journey’s ubiquitous “Don’t Stop Believin'”…among many unfortunate cast recordings). With 2007’s Hairspray, Shankman managed to convert boldfaced staginess into an invigorating, lovably corny rave-up. With Rock of Ages, the fun is, for the vast majority of the running time, overshadowed by the sad sense that nobody behind the camera is trying hard to sell the cheesiness.

I’d honestly recommend buying a ticket for the mash-ups and medleys (and for Zeta-Jones absolutely killing it on Pat Benatar’s “Hit Me with Your Best Shot”), and straight-up napping through the rest. Except, perhaps, for this one other delightfully silly moment: Toward the beginning of the movie, Alec Baldwin’s character Dennis is sifting through papers on his desk. Frustrated with the Bourbon Room’s sorry financial situation, he exclaims lazily, “Taxes, man. They are so not rock n’ roll!”

And to think people believed that Hollywood could never produce a musical that Grover Norquist could endorse.

Rock of Ages gets a wide release on Friday, June 15. The film is rated PG-13 for sexual content, suggestive dancing, some heavy drinking, and language. Click here to get local showtimes and tickets.