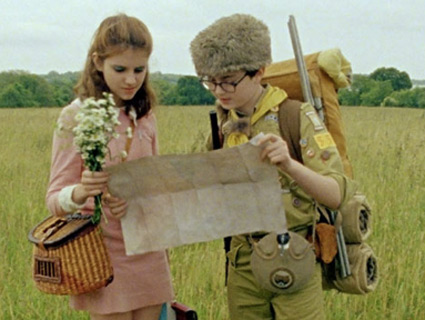 There are a lot of way you could describe Wes Anderson’s latest comedy: Quirky. Poetic. Record-breaking. Precious and self aware to the point that it damn near smothers itself, even. But “blood-stained child pornography” is not one of them.

Before I get into the whole kiddie porn/not kiddie porn thing, let’s get this out of the way: You shoud see Moonrise Kingdom this weekend. It’s visually sublime and punch-drunkenly funny. Anderson takes his patented directorial style (the controlled kookiness, the smooth pans, the color coordination, the deadpan everything) out for what might be its definitive spin. And aside from a few bizarre narrative stumbles in the last 15 minutes, the movie is a straight shot of single malt wit. Also, the performances are uniformly terrific, with all parties, from Tilda Swinton to Bill M.F. Murray, nimbly straddling the thin line between relatability and utter freakshow.

I’d now like to focus on a scene you’re sure to hear a lot about, even from—perhaps especially from—those who haven’t bothered to see the movie. The plot centers around Suzy Bishop (Kara Hayward) and Sam Shakusky (Jared Gilman), two New England preteens who run away from respective homes. Suzy is an emotionally disturbed ginger prone to attacking her peers. Sam is a bespectacled, air-rifle savvy orphan who’s been duly ostracized by his fellow “khaki scouts.”

While evading Suzy’s parents and an accompanying search party, the two runaways shack up for a night on a secluded beach. After some mild lake-swimming, they strip down to their prepubescent skivvies and unwind by tanning, reading, and chatting in hushed, clip monotones. The pair lock eyes and shuffle up next to each other, simmering with stonefaced but concupiscent intentions. Both find themselves in uncharted waters. The tweenage lovebirds start French-kissing, trial-and-error style. Suzy laconically comments on a quick change to an unfamiliar part of Sam’s body. “It feels hard,” she murmurs. Sam’s more focused on her chest, nervously delighting at his first shot at clearing second base. “I think they’re gonna grow more,” she says, with the kind of muted enthusiasm you typically get from a PGA Tour commentator. They take a pause to pierce Suzy’s ears so she can wear some jewlery he’s given her; she shrieks as a crayon-red line of blood runs smoothly down her right cheek. As the adrenaline and pain start to fade, their maiden hook-up continues apace.

It is a sequence that practically begs to fall prey to the no-holds-barred meme wrath of the internet. But that would be a result of crude, lazy readings of the film’s gentle but provocative take on budding sexuality. While it is indeed fun to giggle at this as if it were Wes Anderson’s diabolical homage to Salò, or the 120 Days of Sodom, the scene is an admirable meditation on the fact that kids fumble to come to terms with their sexual desires long before parents or bodies would like them to. It plays less like a spicy loss of innocence, and more like a frequently overlooked extension of it.

Leave it to Wes Anderson to turn the moment—half-naked children groping at each other, bleeding, talking about hard-ons—into something that feels at once playful, tasteful, and bracingly real.

Moonrise Kingdom gets a wider release on Friday, June 1. The film is rated PG-13 for sexual content and smoking. Click here to get local showtimes and tickets.