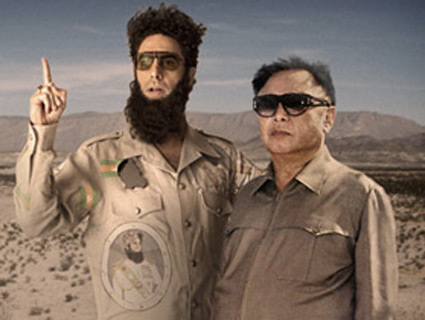 If The Dictator were a dictator, it would probably be Chiang Kai-shek: good in spurts, but excessive and, in the end, unpardonably flawed.

The film (directed by Larry Charles) chronicles the politically incorrect misadventures of Adm. General Haffaz Aladeen, the jolly autocrat of the fictional North African republic of Wadiya. The character—actor/satirist Sacha Baron Cohen’s latest creation—is a comic pastiche of democracy-killing icons: Aladeen enjoys a flamboyant, sybaritic, rape-abundant lifestyle à la Uday Hussein. He possesses the megalomania and the “Amazonian Guard” of a Moammar Qaddafi. And his regime’s nuke-happy, Jew-baiting tendencies are a caricature of today’s Iranian hardliners.

Mix together those three ingredients, add a dash of Elmer J. Fudd, and you’ve got yourself one tall, mad Haffaz Aladeen.

The movie opens with Aladeen royally pissing off the international community. His officers keep dicking over UN weapons inspectors, and the dictator literally cannot keep a straight face while delivering a speech claiming his country’s nuclear program is for peaceful purposes. Consequently, Barack Obama threatens to strike down upon Aladeen with great vengeance and furious anger, naturally, in the form of a NATO air assault. So in order to appease the West, Aladeen takes a vacay to New York City to give a big, combative address before the United Nations. Long story short, he’s betrayed by his longtime adviser Tamir (a reliably stoic Ben Kingsley) and then has to fight his way back to power before liberal democracy gets installed in Wadiya. Stripped of his title and official garb, Aladeen wanders unrecognized through the busy streets of the city. Along the way, he develops a deep, loving, non-rapey affection for Zoey (a dead-on Anna Faris), the manager of a multiethnic vegan commune in Brooklyn. (Aladeen initially refers to her as “Harry Potter” and “Justin Bieber’s chubby brother.”)

If this plot sounds vaguely familiar, it might be because you once read the romance novel Zabiba and the King, upon which The Dictator is loosely based. The critically panned book was penned in 2000 by controversial novelist/playwright S.H. Abd al-Majid al-Tikriti. 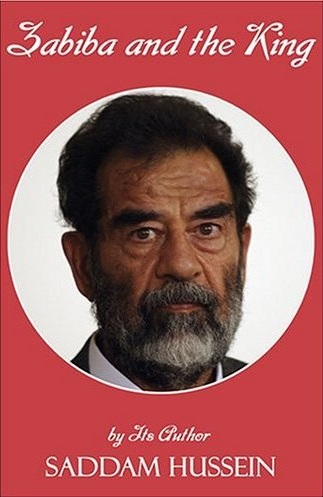 The good news is that The Dictator—much like Baron Cohen’s previous work in Borat, Brüno, and Da Ali G Show—has its inspired, genuinely brilliant moments satirizing politics and culture (it does, after all, take its cues from Charlie Chaplin). The problem is that there aren’t nearly enough of them.

In playing Aladeen, Baron Cohen once again displays his unique talent for wringing sharp commentary out of unapologetically crass hijinks. “All my friends have nuclear weapons!” Aladeen whines, as he rests in the lap of desert-tyrant luxury (playing custom-made Wii games, commanding a fleet of Ferraris, and boning glamorous movie stars like Megan Fox and Arnold Schwarzenegger). His portrayal of the self-indulgent, anti-Semitic despot is a slick balance of bruising physical comedy and unhinged performance art that frequently transcends slapstick imbecility. For example, Baron Cohen concocts the Wadiyan language by improvising a gorgeous blend of mangled Hebrew, bits of Arabic, and straight-up gibberish.

The Dictator also earns high marks in Aladeen’s raunchy-sweet courtship of Zoey, the hirsute flower child who tenderizes his Kurd-gassing heart. “You lied to me,” Zoey exclaims after he reveals his true identity. “And you’re wanted for war crimes!”

Unfortunately, the wildly funny sequences (Aladeen becoming iron-fisted dictator of the hippie commune, Aladeen freaking out passengers on a tourist helicopter ride, American pop songs like R.E.M.’s “Everybody Hurts” covered in Arabic, etc.) only punctuate the longer stretches of unnecessary and stupendously stupid gags. When the Wadiyan dictator loses his cell phone in the birth canal of a pregnant stranger, or engages in a prolonged chat about the little boys he’s molested and driven to suicide, the film starts to epitomize the category of hit-or-miss farce.

These scripted clunkers (written by Baron Cohen and his trusted team of ex-Seinfeld writers) don’t allow Baron Cohen to reach the same heights of balls-out pantomime that made his acclaimed mockumentaries so intoxicating. That’s why the months of gonzo-marketing promoting The Dictator have been more amusing than how most of the actual movie turned out. Take, for instance, Baron Cohen’s recent in-character appearances on The Daily Show, SNL, or the red carpet at the 84th Academy Awards (in which he heroically attacked Ryan Seacrest). Hell, even the admiral general’s fake Twitter account generates laughs more consistently than the film itself: 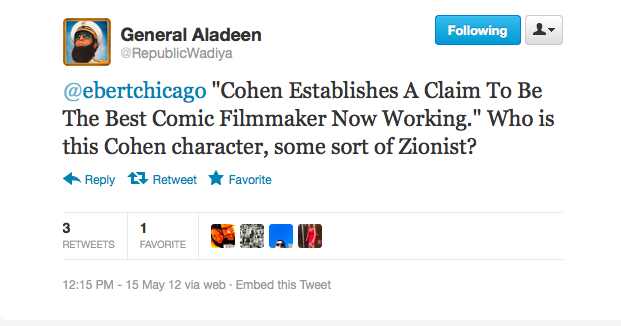 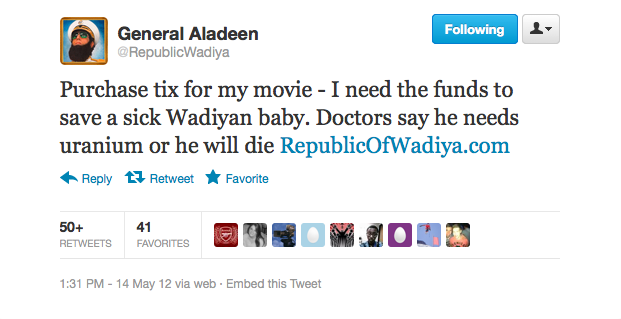 It’s also disheartening to find that many of the rock-solid clips included in the promotional materials didn’t make it into the final cut of the movie. For one, the sublime moment from the teaser trailer, in which Aladeen blurts out, “WTF! What the faholmajamaldamaaldaLEEYA!!!!” is nowhere to be found in the theatrical version. (These multiple exclusions, however, indicate a potential gold mine of deleted scenes and improvised alternate takes—all of which could mean an improved director’s cut, come the DVD.)

But for the handful of times that The Dictator does manage to strike the right rhythm, it’s oppressively funny—and even smart. In the climactic scene at the United Nations, Aladeen offers up an impassioned defense of dictatorship (a monologue that will hopefully go down in cinematic history as the “Democracy Is Flawed” speech). He tells the crowd of diplomats and journalists that if the United States had been blessed with dictatorship, we too could be enjoying a system in which the wealthiest 1 percent controlled all the wealth, mass media could be manipulated in order to get people to vote against their own interests, the government could wage wars under false pretenses, elections could be rigged, and prisons could be packed with minorities “and no one would complain.”

And that’s why, in spite of all its serious flaws, The Dictator is still worth seeing: In its unrelenting spurt of poor taste, Arab stereotypes, and pubic-hair gags, Sacha Baron Cohen and Co. are still able to effectively hold up a mirror to the blemishes on Western civil society. And that’s a mark of a true 21st-century satirist.

The Dictator gets a wide release on Wednesday, May 16. The film is rated R for strong crude and sexual content, brief male nudity, language and some violent images. Click here for local showtimes and tickets.