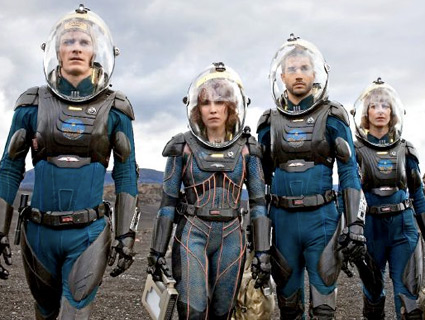 Director Ridley Scott’s hotly anticipated epic (a pseudo-prequel to 1979’s Alien) cuts deeper than merely showing people getting terminally wrecked by martians. Per true, classic Scott form, Prometheus uses the backdrop of sci-fi grandiosity and hard-hitting thrills to meditate on pop-culture-primed philosophy. How thin is the line between religion and scientific inquiry? What force creates life? What supreme being creates the force that creates life? What force created the supreme being that creates the force that creates life?

I dunno, the filmmakers kind of raid the muniments of freshman-year philosophy for this one…

No doubt, Scott’s two-hour movie does not conclusively answer any of these big questions, nor explore them too deeply. For all its earnest meditating, the film’s intellectual heft isn’t all that mightier than an above-par episode of Stargate SG-1. To the credit of Scott and Co., though, they carried the burden of handling these major themes while dealing with the impossibly tall order of satisfying the Alien-universe fanboys. With all the mythology and (for serious) trove of academic papers about the movie and its franchise, critics and devotees were understandably eager for explanations to some of the series’ greatest mysteries.

Well, that doesn’t really happen. It suffices to say that for every burning fan question Prometheus kindly addresses (the “space jockey,” for instance), it poses several others. Its final minutes unabashedly set the stage for a potentially interminable reboot and extension of the franchise.

Despite these glaring flaws, it’s a blast—mainly due to its evocative, elegiac landscape and thoroughly riveting body horror. A brief rundown: Prometheus is set in the years 2089 and 2093. A crew of corporate-sponsored scientists and explorers sets off on a space mission that costs one trillion in company dollars (for a frame of reference, that’s roughly the GDP of nine Qatars). They shuttle their way to a distant moon that may or may not hold the answer to how life on earth was created. The archaeologists on board, including Elizabeth Shaw, played by Noomi Rapace, are rather giddy about this because they think they have a decent shot at proving that Charles Darwin was full of shit.

Yada yada yada, things go horribly wrong and all kinds of warlike aliens and bone-breaking space cobras start coming out of the woodwork in full force. Infections spread, scientists scream in vain, and big things go boom. And the alien creatures might just be plotting the painful end of humankind as we know it, so there’s that.

The acting is on-the-money all around, with Rapace, Idris Elba, Charlize Theron, and Guy Pearce (last seen in the unintentionally glorious Lockout) demonstrating particularly refined dedication. Michael Fassbender, as the stoic, Lawrence of Arabia-quoting android with a Hitler Youth haircut, delivers a performance guaranteed to be praised and dissected all through the summer.

But the real scene-stealers are the stunning visuals. The impressive lunar panorama looks like what you’d get if you took the 3-D scenery in Avatar, mixed it with shots of Yosemite, and made things a whole lot more melancholy and desolate. There’s a piercing poetry to the terrain, from the haunting, dark sierra to the dilated chasms.

As for the visceral payoffs, the film fully compensates the audience for its patience with a crop of dramatically tense sequences. The climactic set piece—involving a last-ditch intergalactic Kamikaze mission—offers the kind of thunderous, artful flash upon which Ridley Scott staked his name. But the scene perhaps most destined for long-term classic status comes when archaeologist Shaw improvises surgery on herself. She programs a dude-only device to strap her body to a table and dig an octopus-like monster out of her stomach. While the murderous little torso-invader flails around wildly, Elizabeth shoots a bunch of staples into her belly to seal up the foul gash as her own gore splatters like a Jackson Pollock all over the cephalopod-from-hell dangling just inches from her face.

These minutes of ferocious, claustrophobic, nerve-cooking intensity are alone worth the price of admission.

Prometheus gets a wide release on Friday, June 8. The film is rated R for sci-fi violence including some intense images, and brief language. Click here to get local showtimes and tickets.