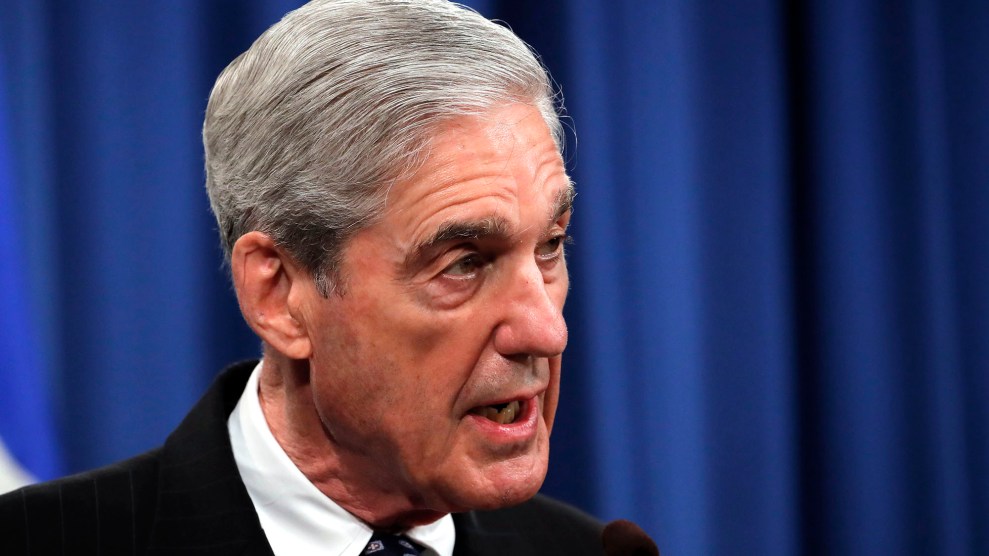 Much of the immediate commentary following special counsel Robert Mueller’s surprise press conference on Wednesday focused on his damning statements about President Donald Trump’s actions that potentially could be charged as obstruction of justice—if Justice Department policy did not prohibit the indictment of a sitting president. But Mueller’s remarks were also a reminder of the core elements of the Trump-Russia scandal: Moscow attacked the 2016 election to help Trump, and Trump assisted Vladimir Putin’s assault by claiming at the time (and afterward) that it wasn’t real. That is, whether or not Trump had criminally colluded with Russian operatives, he did side with a foreign adversary that attacked American democracy—and that’s treachery.

The attack was real. It was significant. And there was a compelling need to investigate it.

Mueller began his statement by reiterating what has already been stated by the US intelligence community, Democratic and Republican members of Congress, and his own report: Putin “launched a concerted attack on our political system.” He noted the Russians “used sophisticated cyber techniques to hack into computers and networks used by the Clinton campaign. They stole private information and then released that information through fake online identities and through the organization WikiLeaks. The releases were designed and timed to interfere with our election and to damage a presidential candidate.” The Kremlin’s goal was to impede Hillary Clinton and, consequently, boost Trump. And, Mueller added, “a private Russian entity engaged in a social media operation where Russian citizens posed as Americans in order to influence an election.”

In other words, there is no Russian hoax. This is no Deep State concoction cooked up to subvert Trump’s campaign or his presidency. The attack was real. It was significant. And there was a compelling need to investigate it and any contacts between Trump associates and Russians.

Yet during the campaign, Trump and his lieutenants repeatedly denied the Russian attack was under way. As soon as the Democratic National Committee publicly announced its servers had been penetrated by Russian hackers, the Trump campaign claimed this was a “hoax” devised by the DNC itself. After Democratic emails swiped by the Russians were dumped by WikiLeaks right before the Democratic convention in July 2016, Donald Trump Jr. and Paul Manfort, then the campaign chairman, went on news shows and denied this had anything to do with the Russians. (Only a month earlier, they and Jared Kushner had attended a meeting with a Russian emissary whom they were told was bringing them dirt on Clinton as part of a secret Kremlin scheme to help the Trump campaign.)

Even after the intelligence community briefed Trump in mid-August of that year and informed him that Moscow indeed was behind the hack-and-dump operation, he continued to say in public that there was no reason to blame the Russians for this intervention. At the first presidential debate, Trump huffed, “I don’t think anybody knows it was Russia that broke into the DNC…It could also be lots of other people. It also could be somebody sitting on their bed that weighs 400 pounds, OK? You don’t know who broke into DNC.” He kept this up after the Obama administration a few weeks later officially declared Russia was culpable.

Comments like these must have signaled to Russia—a foreign adversary trying to subvert an American election—that the Trump campaign was just fine with its underhanded efforts. (After the DNC emails were posted around convention time, Trump publicly called on Russians to hack Clinton: “Russia, if you’re listening, I hope you’re able to find the 30,000 emails that are missing.” And, according to Mueller’s report, hours later, Russian hackers targeted Clinton’s servers.)

Also in the summer of 2016, George Papadopoulos, a Trump campaign foreign policy adviser, was trying to set up a back-channel with Putin’s office. This means that while Putin was waging information warfare on the United States, one of the campaigns was reaching out and saying, Hey, we want to play ball with you. No doubt, that was another sign of encouragement for Moscow. (And don’t forget that from October 2015 until June 2016, Trump was secretly negotiating to develop a tower project in Moscow that could reap him hundreds of millions of dollars—talks that included communicating with the office of Putin’s top aide. At the same time, Trump was telling American voters he had nothing to do with Russia.)

Trump and his team were repeating and amplifying Putin’s disinformation. They were aiding and abetting the Kremlin.

Trump put his own interests ahead of the security of the nation. And by insisting there was no Russian attack, he helped Putin pull off this caper and made it more difficult for President Barack Obama to enlist Republicans in a united front against Moscow’s attack. With Russia falsely claiming it had nothing to do with the hacks and dumps, Trump and his team were repeating and amplifying Putin’s disinformation. They were aiding and abetting the Kremlin. And after Trump won the election, he continued this pattern, failing to acknowledge the Russian attack and notoriously saying he accepted Putin’s denials. (One result of this was that Trump has done nothing to prioritize actions to prevent future attacks on US elections.)

Mueller’s report notes that the Trump campaign tried to reach out to WikiLeaks during the campaign and exploited the Russian attack—even as it was publicly dismissing the idea that Moscow was undermining the election. Mueller did not dwell on this point during his appearance; he only noted that “there was insufficient evidence to charge a broader conspiracy” involving Trump associates and Russians. But this was his understated way of saying that his report had not reached a verdict of whether there had been any collusion. His task was only to determine if crimes had been committed.

The big news was Mueller signaling that there had been enough evidence of obstruction to consider an indictment of Trump but for the DOJ policy and that it was now up to Congress to decide the matter. But he ended with the fundamental fact of this scandal. “I will close,” he said, “by reiterating the central allegation of our indictments: That there were multiple, systematic efforts to interfere in our election, and that allegation deserves the attention of every American.”

That was certainly a dig at Trump, who has refused to recognize this central allegation. And it highlights a key subplot of the scandal: Trump has consistently sided with Putin and purposefully obscured the reality of what happened in 2016 (often by tossing out diversions and distractions regarding Deep State coups and other rightwing conspiracy theories). And Trump and his crowd continue to do so. After Trump tweeted “case is closed” in response to Mueller’s statement, his campaign manager, Brad Parscale, issued a statement full of lies: “Special Counsel Robert Mueller’s remarks today confirmed what we already knew: There was no collusion between the Russians and the Trump campaign, and there was no case for obstruction. President Trump has been fully and completely exonerated.” None of that was true. And Parscale added, “Now it’s time to turn to the origins of the Russia hoax.”

Hoax—they’re sticking with hoax. This is total gaslighting. Trump and his minions are still covering for Putin and playing the (paranoid) victim.

On Wednesday, Mueller did not spill any beans that were not in his report. He was cautious and disciplined. But this media appearance demonstrated that it is important that the facts and outrages of the Trump-Russia scandal—probably the most consequential political scandal in American history—not be reserved to the printed page of a long and dense report.

Mueller’s nine-and-half-minute-long statement likely had a different, possibly greater, impact than the release of that report. Here was a credible source telling the story, even if only in an abbreviated manner. This illustrated what House Democrats need to do, whether or not they proceed with impeachment: Bring witnesses to public hearings to convey the full narrative of the Russiagate. House committees are tussling with the Trump administration over potential witnesses, such as former White House counsel Don McGahn, but there are others the Democrats could showcase. (How about former Trump business associate Felix Sater, who negotiated the Trump project in Moscow?) The Dems ought to move past the procedural squabbling and present a clear depiction of Trump’s misconduct in this matter—and others.

Mueller did not advocate any course of action. His job is done, his mission accomplished. He announced his resignation and passed the case for obstruction to Congress. But he has told a slice of the story—a slice that is damning for Trump. It fixes a spotlight on the momentous lies Trump and his crew have told, lies that aided Putin’s war on American democracy, and lies that continue to flow from Trump and his henchmen. Mueller has served the truth. In doing so, he has indicted Trump—not in a legal sense, but for betraying his country.