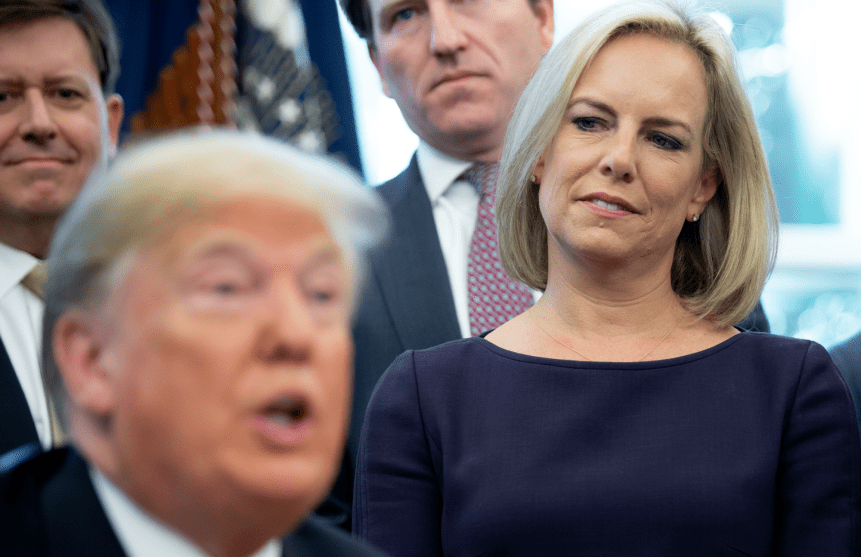 When former Department of Homeland Security Secretary Kirstjen Nielsen began to prepare a plan to address potential Russian interference in the 2020 election, she was told by President Donald Trump’s chief of staff, Mick Mulvaney, to refrain from discussing the issue in front of the president, according to a report from the New York Times.

A senior Trump administration official recalled to the Times that Mr. Mulvaney said it “wasn’t a great subject and should be kept below his level,” because Trump considers any discussion of Russia’s interference in the 2016 election to be a challenge to the legitimacy of his presidency.

The DHS is the federal agency primarily responsible for election security, but despite Nielsen’s growing concerns about Russia’s continued involvement in the 2018 midterms, she abandoned her effort to organize a meeting with the White House in the hopes of creating a cohesive strategy for 2020 after pushback from Mulvaney. The issue therefore did not gain traction within the White House and has resulted in a lack of public awareness regarding the latest potential attempts of Russian election interference.

In a statement on Wednesday, Mulvaney said he does not recall ordering Nielsen or others to keep discussions regarding election security and potential Russian interference away from President Trump. “Unlike the Obama administration, who knew about Russian actions in 2014 and did nothing, the Trump administration will not tolerate foreign interference in our elections, and we’ve already taken many steps to prevent it in the future.”

President Trump and those close to him have downplayed the effects of Russia’s interference in the 2016 election. His son-in-law and adviser, Jared Kushner, minimized the Russian interference in the 2016 presidential election down to a ”couple of Facebook ads,” and said that “quite frankly, the whole thing is just a big distraction for the country,” during an interview in New York on Tuesday.

Last year, national security adviser John Bolton eliminated the cybersecurity coordinator position at the White House, a move that was widely interpreted as deprioritizing cybersecurity efforts despite threats from Russia and Iran.