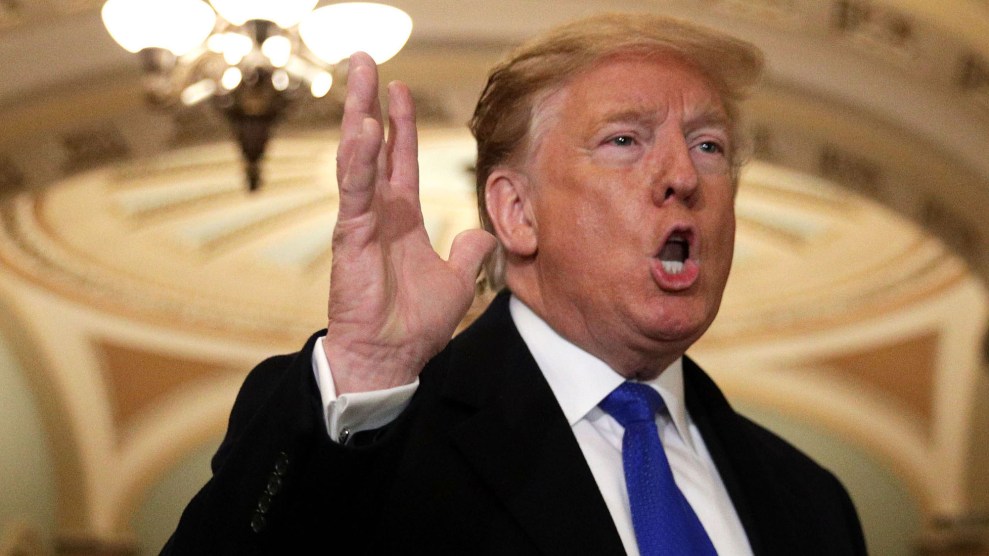 President Donald Trump speaks at the US Capitol on March 26, 2019.Alex Wong/Getty

The move, made at Attorney General William Barr’s request, came just minutes after Democrats declined to cancel a vote to hold Barr in contempt of Congress for his refusal to turn over the Mueller material to Congress. The committee voted along party lines to take up the contempt report during a contentious hearing. They are set to vote Wednesday afternoon to send the matter to the full House.

“This protective assertion of executive privilege ensures the President’s ability to make a final decision whether to assert executive privilege following a full review of these materials,” Assistant Attorney General Stephen Boyd wrote Wednesday in a letter to House Judiciary Committee Chair Jerrold Nadler (D-N.Y.). “Regrettably, you have made this assertion necessary by your insistence upon scheduling a premature contempt vote.”

“If allowed to go unchecked, this obstruction means the end of congressional oversight.”

Democrats said the Justice Department had already waived executive privilege over the report and cannot retroactively apply it. Nadler called the department’s arguments “utterly without credibility, merit or legal or factual basis.” The committee will “take a hard look at officials who are enabling this cover-up,” Nadler said.

The executive privilege claim was the latest in a series of actions that Democrats say constitute an unprecedented attempt by Trump and his administration to stonewall lawful congressional oversight. Barr refused last week to testify before the Judiciary Committee after Democrats voted to allow staff members to question him. On Monday night, Treasury Secretary Steve Mnuchin, after consulting with Barr, refused to comply with a House Ways and Means Committee demand for Trump’s tax returns, despite a law that says the IRS must provide tax records to the committee. Mnuchin claimed the request did not serve a legitimate legislative purpose, granting himself the power to assess the validity of a congressional action. On Tuesday, former White House counsel Don McGahn, who told the special counsel’s office about Trump’s efforts to fire Mueller, refused to turn over subpoenaed documents to the Judiciary Committee because the White House claimed that material, too, fell under executive privilege.

Democrats noted that Trump has called for his administration to blow off Democratic subpoenas, has ordered officials to simply refuse to appear before House committees, and has even sued House Oversight Chair Elijah Cummings (D-Md.) to try to block Cummings’ subpoena for records related to Trump’s financial dealings.

These matters are expected to be resolved in court, but the process could take years, and Democrats say Trump in the meantime is creating a precedent that could permanently weaken lawmakers’ ability to obtain information.

“If allowed to go unchecked, this obstruction means the end of congressional oversight,” Nadler said Wednesday.

Judiciary Committee Republicans countered Wednesday that Nadler has passed up chances to compromise with Barr. They also argued that the panel’s subpoena would require Barr to break the law by releasing grand jury information. Democrats said they were only asking the Justice Department to seek a court order allowing release of the material to Congress.

Some Republicans also argued that Democrats were targeting Barr because the attorney general says he has ordered an investigation into the origins of the Trump-Russia investigation, in the process taking a step Trump has long demanded. Many Democrats have called Barr’s openness to Trump’s request a sign of his politicization of the department. “He’s gonna find out why this investigation started in the first place,” said Rep. Jim Jordan (R-Ohio). “Bill Barr has said he’s gonna get to the bottom of it.”