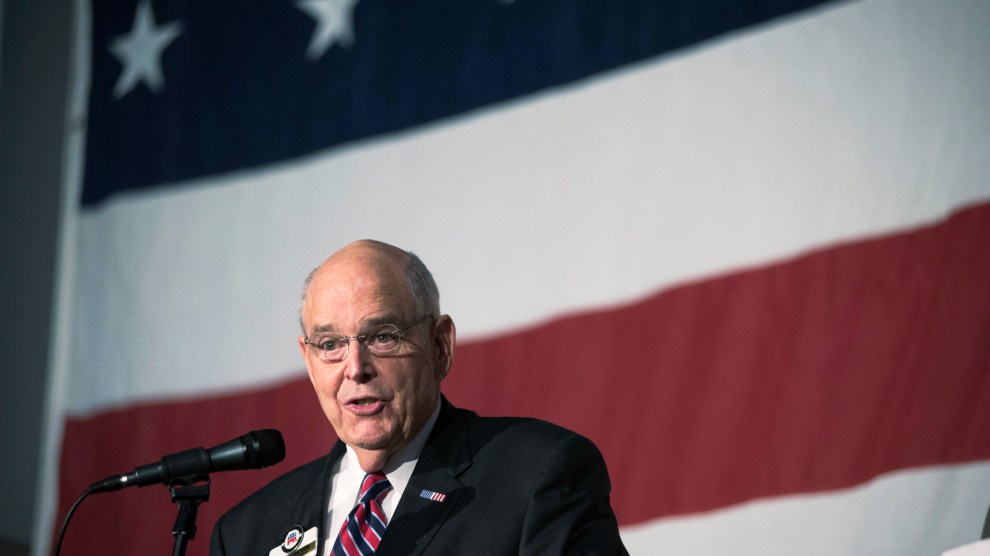 Andrew Reynolds, a professor of political science at the University of North Carolina-Chapel Hill, was only half-joking when he recently wondered aloud to some friends that perhaps the state is in the midst of some sort of “controlled experiment.”

But none of that has come out of the blue. The state’s electoral system has been slowly sliding the rails over the last decade. In 2010, Republicans won control of the House and Senate in North Carolina, and they’ve been working to change the democratic infrastructure of the state ever since. Reynolds calls their efforts a “cancer…at the center of politics in the state.”

In late 2016, he wrote an op-ed for the Raleigh News and Observer headlined “North Carolina no longer a democracy.” Reynolds, who studies international relations, applied models he used for other countries’ democratic systems to his own state and found it “places us alongside authoritarian states and pseudo-democracies like Cuba, Indonesia and Sierra Leone.” He argued that a burdensome voter ID law, gerrymandered maps, and the now-infamous “bathroom bill,” which blocked transgender people from using the bathroom of their choice, added up to “a deeply flawed, partly free democracy.” The column went viral.

But Reynolds couldn’t have guessed how much worse it could get. “When you add all the stuff that I spoke about, and then they literally steal the election in the North Carolina 9th District, and then [North Carolina GOP chairman] Robin Hayes gets indicted for corruption. It’s like somebody’s making this up!”

As two elections quickly approach—a special congressional election in the fall, and the presidential election after that—the state is being forced into an inflection point. North Carolina is being considered a battleground state for national Democrats who hope to nudge it from purple to blue in 2020. As the state’s urban and suburban areas continue to grow, thanks to growing business and technology opportunities there, some politicos are beginning to wonder if that will be enough to finally tip the scales in future elections. According to a New York Times Magazine story that asked if North Carolina is representative of the future of American politics, seven of the state’s 100 counties have accounted for nearly 40 percent of its voter registration growth. Here are the biggest challenges facing North Carolina’s voting system.

In February, the North Carolina Elections Board held a series of dramatic hearings to investigate allegations that a Republican operative working for 2018 House candidate Mark Harris collected and altered absentee ballots in the 9th Congressional District. The board found the evidence compelling enough that it was unable to certify the results of the election, as did Harris, who called for a new election during the hearings, though he will not be running due to health issues. The operative, L. McCrae Dowless Jr., has been indicted on three felony charges of obstruction of justice, two charges of conspiracy to commit obstruction of justice, and two charges of possession of absentee ballot.

As the state starts the election process all over again for its 9th District, there are two frontrunners for the GOP nomination: One is a Confederate apologist who photoshopped a picture of Barack Obama to make a racist joke about the death of Trayvon Martin in his gun shop’s newsletter, and the other is the lead sponsor of HB 2, the state’s 2016 bathroom bill, who has already made two ads attacking progressive women in which he calls them “crazies” and “clowns.”

A Supreme Court decision in a case that argues the state’s congressional map is a partisan gerrymander is also imminent.

The argument over gerrymandering North Carolina began when its electoral maps were redrawn following the 2010 census. Those were eventually thrown out as racial gerrymanders, and the replacement maps are being challenged as partisan by a local voting rights group. The state map is headed for trial in July in the Superior Court Division of Wake County; the federal map is before the Supreme Court, which heard oral arguments in late March. That means that every electoral map used since 2010 has “basically been declared illegal, in one sense or another,” said Tom Wolf, who works for the Democracy Program with the Brennan Center for Justice.

Democrats are trying to pass a new Senate bill that would create an independent commission to draw the maps in the future, though the law would not take effect until after the 2020 elections. Similar efforts have failed in the past: A decade ago, two Republican lawmakers attempted to convene an independent group to handle redistricting but they stopped pushing when their party gained control of the legislature.

“But the election maps are just part of the bigger apparatus of cementing one party’s power,” Wolf noted. “All of these different bits and pieces of the election apparatus in North Carolina have been bent in the favor of entrenchment of one party at the expense of everything else.”

In 2013, voter ID laws were championed as a “common sense” way to protect elections by Republican Gov. Pat McCrory, despite little evidence that such legislation prevents fraud, and ample evidence that it blocks access to the ballot box. After the law was struck down in the Court of Appeals for the 4th Circuit for being intentionally designed to disenfranchise African American voters in 2016, the legislature passed a new version by referendum last year as a constitutional amendment to avoid further legal challenge. In this implementation, they’ve softened the restrictions that the court found problematic to further avoid further lawsuits, the use of student IDs would be accepted as a valid form of identification, as would non-operator IDs that would be issued through the DMV and mailed to those whose licenses are revoked. “It’ll be one of the softest ID bills in the country now as opposed to one of the hardest,” said Gerry Cohen, former special counsel to the North Carolina General Assembly. “It changed dramatically because of litigation.”

Even so, the new version of the voter ID law is once more being challenged in state and federal courts by the NAACP. Cohen points out the lawsuits have been filed to fight for populations that are still likely to be excluded: the rural elderly, young people without driver’s licenses, poor people. “I think it’s an enormously expensive solution in search of a problem still,” Cohen said. The Board of Elections plans to have the voter ID restrictions in place for the 2020 elections.

Hayes, who is a significant donor for the party in addition to being the state GOP’s chair, was indicted after helping connect a Durham businessman with an insurance commissioner to pay him millions of dollars to loosen regulations. A political committee controlled by US Rep. Mark Walker (R-N.C.) was sent  $150,000 to pressure the insurance commissioner; in official documents regarding the matter, Walker is referred to as Public Official A. “Just between the three of us,” a co-conspirator wrote in an email regarding the transaction, “I was told $150K will be going to [Public Official A].”* Dallas Woodhouse, executive director of the NCGOP who has long been Hayes’ right-hand man, also stepped down—though he wasn’t directly involved in the bribery indictments. Not to say Woodhouse doesn’t have his failings. A former editor for the largest paper in the state called Woodhouse the “Roger Stone of NC politics” in wishing him goodbye.

Reynolds called corruption “predictable” after democratic norms had been crumbled by the Republican Party. “They’re actually acting rationally in the game that they have to play and created,” he said.

The GOP will host its 2020 national convention in Charlotte, and President Donald Trump’s aides are concerned that the convention will be marred by divisions within the party. The state contingent, for its part, might want to make sure no one is looking particularly hard at them.

Correction: An earlier version of this article mischaracterized the nature of Walker’s involvement. It has been updated for accuracy.