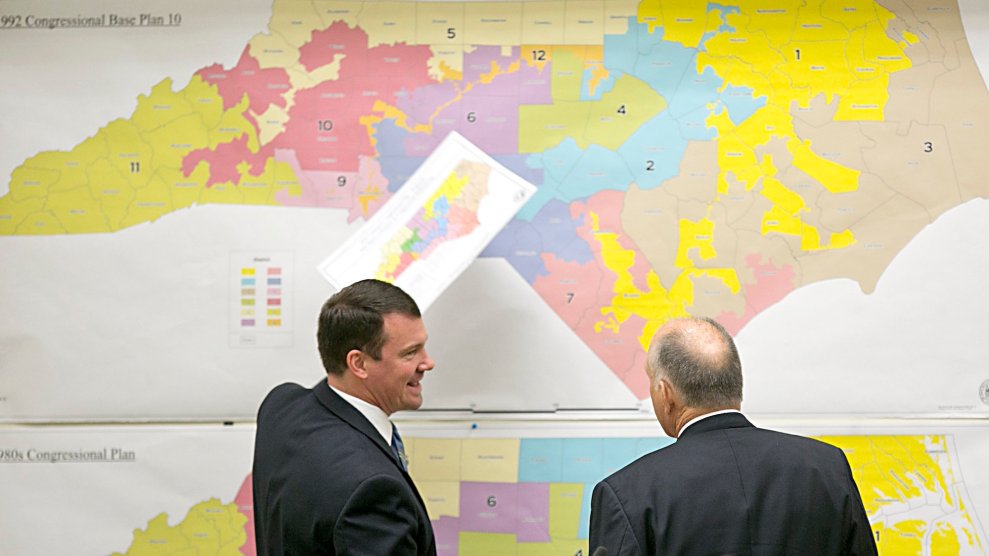 A group of Democrats, voters, and activists joined with Common Cause, a public advocacy group, and filed a lawsuit Friday alleging that the way North Carolina Republicans drew up the state’s congressional districts constituted a blatant partisan gerrymander and violates the US Constitution. If the case is successful, it could go a long way in helping courts define when redistricting with partisan intent violates voters’ rights to elect officials of their choosing.

“What is at stake is whether politicians have the power to manipulate voting maps to unjustly insulate themselves from accountability, or whether voters have the fundamental right as Americans to choose their representatives in fair and open elections,” Bob Phillips, the executive director of Common Cause North Carolina, said in a statement. “We believe this is a vital case that could strike at the very foundation of gerrymandering.”

In 2011, after Republicans took control of both legislative houses in North Carolina, they created a new redistricting plan for the state’s 13 congressional districts that sought to entrench a Republican majority in the state’s congressional delegation. On February 5, 2016, a state district court ruled that the plan constituted illegal racial gerrymandering by populating two districts disproportionately with African American voters, thereby white-washing the other districts and ensuring Republican victories. It ordered the state Legislature to redraw the districts. North Carolina has appealed that ruling to the US Supreme Court in Harris v. McCrory, but the case has not yet been decided.

The coalition’s lawsuit points out that state Republicans’ effort to lock in their party’s 10-3 advantage for the state’s congressional delegation flies in the face of representative democracy because voter registration data shows that Republicans make up just 30 percent of all registered voters, compared with 40 percent for Democrats. The remaining 30 percent register as unaffiliated.

Two of the Republicans involved in redrawing the maps said in a statement Friday that the districts are fair and legal, and that the lawsuit is “just the latest in a long line of attempts by far-left groups to use the federal court system to take away the rights of North Carolina voters.”

The lawsuit filed Friday notes that Common Cause is nonpartisan, and that the organization is currently opposing the efforts of the state Democratic party to gerrymander in Maryland.

See the full lawsuit below: