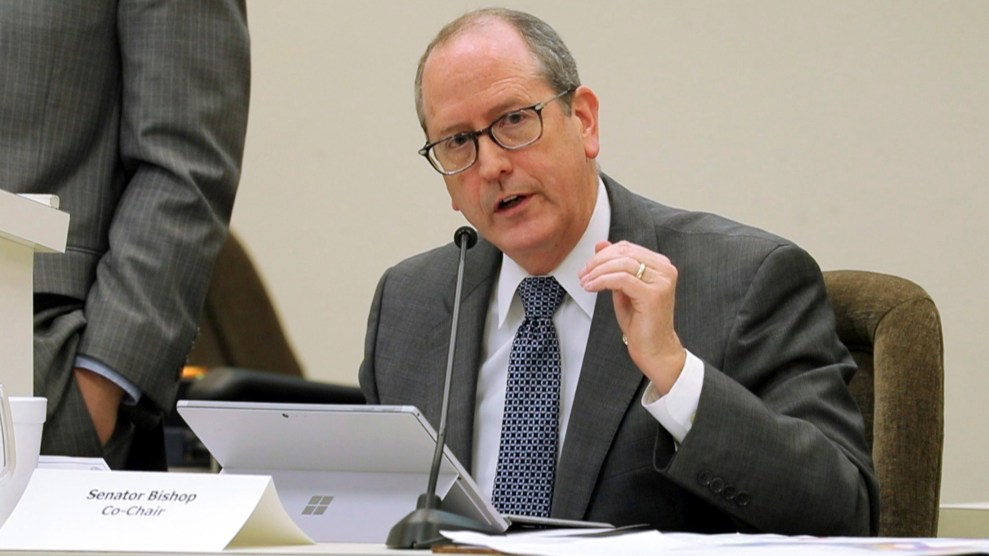 This election is the last undecided congressional race from the 2018 cycle; it headed to a special election this year due to voter fraud. Mark Harris—the Republican candidate whose campaign paid for an absentee ballot scheme—dropped out, leaving Republicans scrambling to decide on their candidate.

Bishop tweeted out his first ad with a claim that his Democratic opponent, Dan McCready, is friends with “gun grabbers” and “socialists.” (McCready is a former Marine who went to Harvard Business School.)

The ad is set to ominous music and features the likenesses of female liberal politicians such as Alexandria Ocasio-Cortez, Elizabeth Warren, and Nancy Pelosi. A deep male voice warns that Democrats are “letting illegal aliens flood across our unprotected borders,” they “want our guns,” and they “don’t believe life is a gift from God.”

The ad ends with a dad joke.

“Dan McCready is the wrong Dan in this race,” Bishop says as a photo of him with his family and golden retriever on their porch fades in. “I’m Dan Bishop, and I’m the RIGHT Dan in this race.”

Get it? Because they’re both named Dan.

Bishop is best-known nationally as the General Assembly member who sponsored HB2, a law that attempted to legislate what bathrooms transgender individuals could use. (After Dem. Roy Cooper won the governorship, it was quickly repealed.) The deep unpopularity of the law cost the North Carolina economy $3.76 billion, according to the Associated Press. “[T]hey want to make us into a national example—SO THAT NO ONE WILL EVER STAND UP to the radical transgender agenda again,” he wrote in a fundraising email defending that decision.

However, Bishop’s current campaign website doesn’t mention HB2 or that he was an early investor in the right-wing social website Gab. It does, however, continue to point out the obvious parallel between the candidates’ names under the heading “Where Dan Stands”: “I’m the right Dan to send to Congress. I will always tell you where I stand on the issues. Dan McCready is the wrong Dan.”

Bishop also made headlines in 2017 when he compared the Black Lives Matter Movement to white supremacists shortly after the Charlottesville Unite the Right rally, describing them as “both violent, racist movements.”

Despite his obsession with who uses what bathroom and his common first name, Bishop has done well locally. He was the only Republican in the Charlotte area to survive the 2018 blue wave and get back to the General Assembly. Technically, Bishop is still in the May Republican primary, which 10 candidates have entered thus far. Mark Harris endorsed Stony Rushing, who has previously defended Confederate monuments and the NRA’s interpretation of the 2nd Amendment. Bishop, among the group, looks to be a front-runner.

Today, he continued his strategy of linking McCready to the rising progressive women of the Democratic party. “Dan McCready took campaign cash from Rep. Ilhan Omar,” he tweeted, which, of course, makes Bishop “the Right Dan.”

I’m the Right Dan in this race and I don’t. Do you and your friends?… https://t.co/ehGUhrOdS4