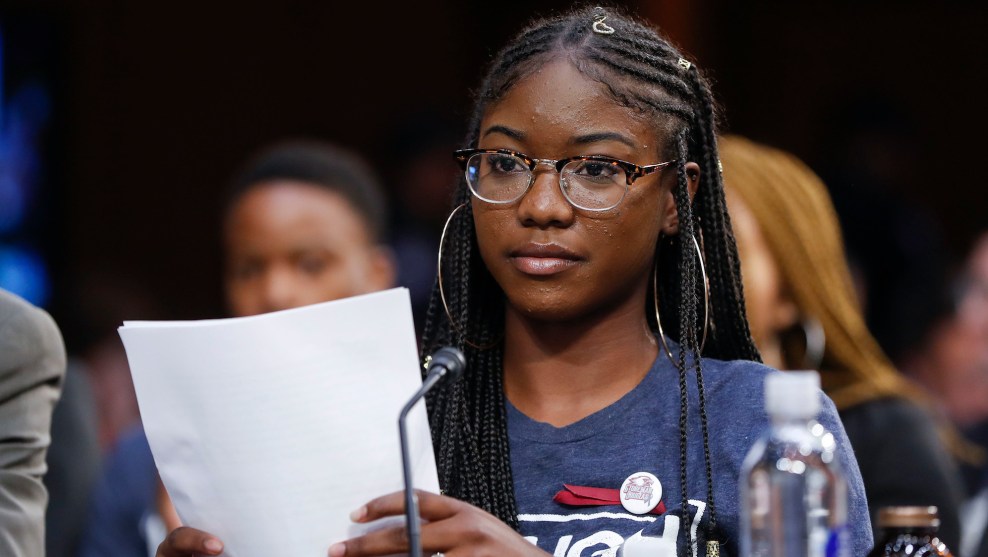 The final day of Brett Kavanaugh’s Supreme Court confirmation hearing is dedicated to witnesses speaking about his qualifications for the bench. Among the 13 people Democrats have called upon to testify against him is a survivor of the February shooting at Marjory Stoneman Douglas High School in Parkland, Florida, who condemned Kavanaugh’s record on guns and asked the senators to consider how his confirmation might affect those affected by gun violence.

Stoneman Douglas senior Aalayah Eastmond was in the third classroom attacked on February 14, where she hid under the body of Nicholas Dworet, a classmate who’d been killed in front of her, as the gunman sprayed bullets across the room. Eastmond also lost her uncle to a shooting in Brooklyn.

Kavanaugh’s record on guns has concerned gun safety activists, who worry his presence on the court will increase both the number of gun-related cases the court chooses to hear and the likelihood that the court will rule on the side of gun rights. Kavanaugh’s opinions on the subject have been more radical than those of his peers: In 2011, he issued a dissent in a ruling that upheld the District of Columbia’s assault weapons ban, arguing that the ban was unconstitutional. Other appeals courts have upheld limits on gun ownership, and no other court has agreed with Kavanaugh on this opinion. On Wednesday, California Sen. Dianne Feinstein, the Democratic leader on the Judiciary Committee, asked Kavanaugh to justify his 2011 ruling. The previous day, Kavanaugh apparently refused a handshake from Fred Guttenberg, the father of a student killed in the Parkland shooting.

Since surviving the February shooting, Eastmond has been prominent in the movement to prevent gun violence. She addressed hundreds of thousands gathered for the March for Our Lives event in Washington earlier this year and led youth lobbying initiatives on Capitol Hill. Since May, she’s been an executive council member with Team ENOUGH, the Brady Campaign to Prevent Gun Violence’s youth leadership initiative, which has been working to channel the youth energy around preventing gun violence into the midterm elections. In the testimony she prepared for Friday’s hearing, Eastmond urged lawmakers, “As you make your final decision, think about it as if you had to justify and defend your choice to those who we lost to gun violence. If the youth across the country can fight to eradicate gun violence, why can’t judges, lawmakers, and Donald Trump understand that young people are dying from this senseless gun violence?”

I spoke with Eastmond about her preparation for Friday’s hearing and what she hopes her testimony will accomplish.

Mother Jones: How did you end up being one of the 13 witnesses called to testify against Kavanaugh?

Aalayah Eastmond: I met with Sen. Feinstein back in March, right before the March for Our Lives in DC. Back then, I shared my personal story with her staffer. About two weeks ago, her office reached out to ask me to testify. I think when they heard my story, they really thought I was the perfect person to share a story with concerning Kavanaugh’s views on the Second Amendment.

MJ: How did you put your testimony together?

AE: The statement pretty much reflects my own view on Kavanaugh and the Second Amendment, and what lawmakers and people in Congress should be doing concerning the Second Amendment. I’ve also been following the daily news about what’s been going on at the hearings since Tuesday. I’ve tried to bring in some of what I’ve seen, like when Judge Kavanaugh didn’t shake Fred Guttenberg’s hand. I worked with the Brady Campaign on my testimony, too. I also reached out to my fellow executive members, and I incorporated their voices into my testimony, because they’re just as important. And then, of course, there are my Stoneman Douglas classmates, who I included because we experienced the same horrific violence.

MJ: What do you hope the Judiciary Committee takes away from your testimony?

AE: Honestly, I just want them to listen to my story and recognize that I’m not the only one, that there’s thousands of youth across the country with similar stories to mine pertaining to gun violence. And I believe that they should choose a judge for the highest court of the land that would understand that and recognize that it’s a problem.

MJ: You’ve been personally affected by gun violence in multiple ways: You survived a mass shooting, and you lost your uncle to everyday gun violence more than a decade earlier. How has your thinking about gun violence prevention evolved through each of these tragedies?

AE: I always knew that gun violence was a problem, but I didn’t really address the issue until I was directly affected on February 14, when I nearly lost my life. Gun violence has been part of my life since the age of three, when I lost my uncle, and growing up, all of my family was in Brooklyn. Dealing with the issue has always been hard, but since February 14, it’s been harder. And it’s definitely impacted my views because I now recognize that it impacts all the youth across the county, and that’s a huge problem.

MJ: What scares you the most about Kavanaugh’s possible confirmation?

AE: The scariest part is I think is that Judge Kavanaugh doesn’t seem to want to see the problem I’ll address with him in my testimony. If you think that semiautomatic weapons are not dangerous, and that the freedom of Americans to own a gun is more important than youths’ lives, that’s my biggest concern.

This interview has been edited and condensed for clarity.