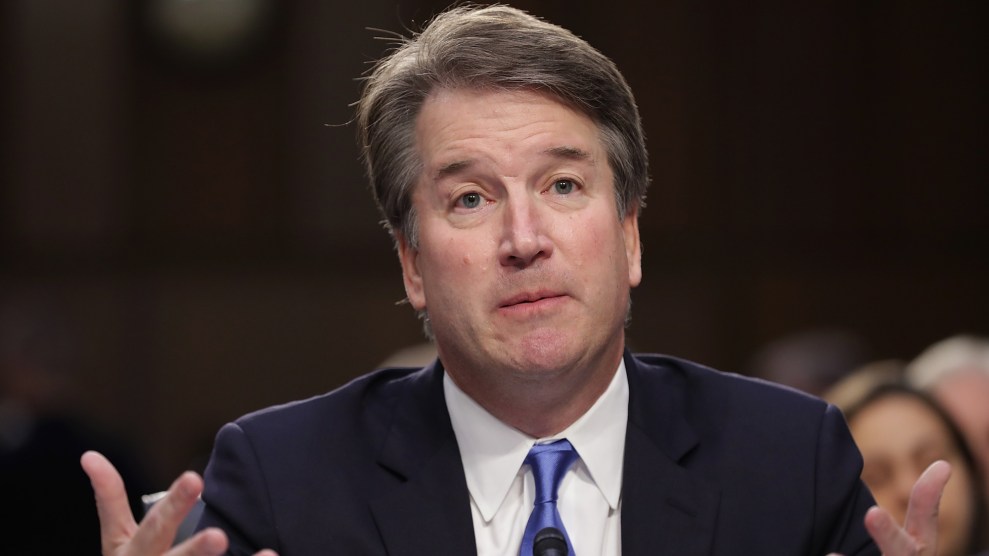 In 2011, Brett Kavanaugh wrote a dissent in a case in which he argued that the District of Columbia’s ban on assault weapons was unconstitutional. “A ban on a class of arms is not an ‘incidental’ regulation,” he wrote. “It is equivalent to a ban on a category of speech.” No other court has agreed with Kavanaugh on this front, and other appeals courts have upheld reasonable limits on gun ownership.

On Wednesday, the second day of Kavanaugh’s confirmation hearing to join the Supreme Court, this dissent was front and center as he faced sharp questioning from the Senate Judiciary Committee.

Sen. Dianne Feinstein (D-Calif.) grilled the nominee about his view that assault weapons couldn’t be regulated, asking what evidence he used to justify his position that assault weapons were “in common use” and thus their ownership was protected by the Second Amendment.

Kavanaugh dodged the question, saying, “Machine guns can be prohibited.” Feinstein responded, “I think we’re on totally different wavelengths.” She noted that machine guns had long been prohibited and went on to press him on assault weapons, highlighting their use in multiple school shootings in recent years. Feinstein wanted to know what evidence or research he’d drawn on to support his assertion that assault weapons were “common.” Kavanaugh insisted that “millions and millions” of assault weapons were owned in the United States, to which Feinstein replied, “You’re saying numbers define common use?” She expressed skepticism that an assault weapon was something lots of ordinary Americans toted around on a daily basis.

Kavanaugh claimed sympathy to the problem of gun violence, noting that he’d grown up around Washington, DC, which was once known as the murder capital of America. None of that changed his views on gun regulation, though. “This is all about precedent for me,” Kavanaugh told Feinstein, citing the Supreme Court’s 2008 majority opinion in District of Columbia v. Heller, authored by the late Justice Antonin Scalia, which overturned the District’s ban on handguns and firmly established an individual right to own guns. Watch the entire exchange here:

Sen. Feinstein (D-CA) on guns: "Common use is an activity. It's not common storage or possession. It's use. So what you said was that [assault] weapons are commonly used. They're not."
Kavanaugh: "They're widely possessed in the United States, Senator." https://t.co/irsDUUh69l pic.twitter.com/X1dWO7hcMc

Kavanaugh kicked off the second day of his confirmation hearing amid loud and angry protests from the public, whose noisy objection to his nomination drowned out most of his answers from Sen. Chuck Grassley (R-Iowa), the committee chairman. But most of the protesters had been removed from the room by the time Feinstein launched into her interrogation.