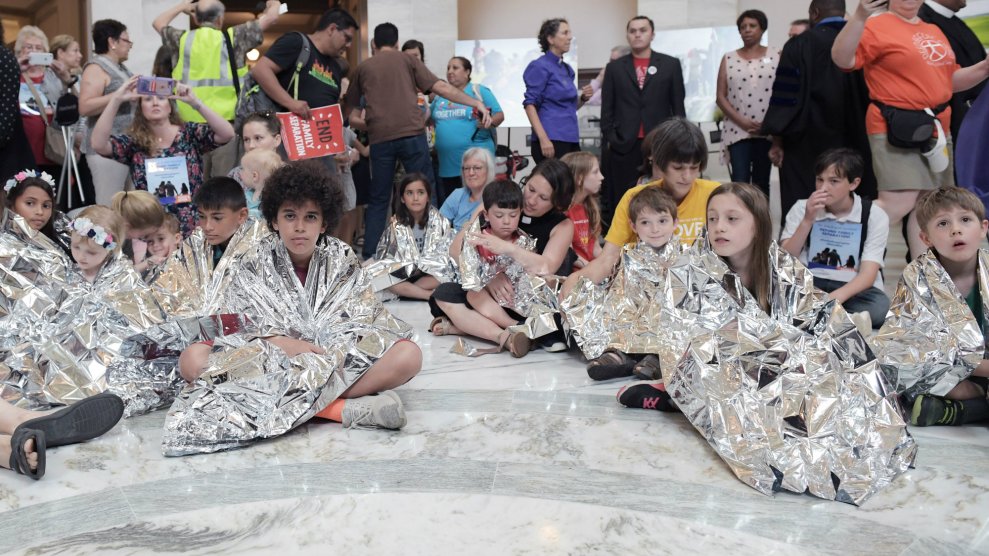 The president may have signed an executive order intended to end family separation at the border, but immigrant advocates aren’t quieting down. On Thursday morning, dozens of faith leaders, children, and protesters gathered at the Russell Senate office Building to demonstrate against the family crisis on the border.

In May, Attorney General Jeff Sessions issued a policy directive saying the federal government would be taking a zero-tolerance approach at the border and would be prosecuting anyone who tried to cross the border without the proper documentation. This meant that anyone who came with children would be separated from them. In six weeks, over 2,000 kids were taken from their parents and placed in detention centers, while images of children in cages has dominated the media and triggered an avalanche of criticism, some by fellow Republicans. After alleging that only Congress could change the policy, on Wednesday, President Trump signed an executive order he said would end separating parents and children and instead detain families as a unit.

Thursday’s Capitol Hill demonstration was organized by several different groups including Faith in Action, a faith-based grassroots organization. “Leaders will denounce Trump’s latest Executive Action, which effectively jails children with parents, criminalizes immigrants, and worsens the humanitarian crisis,” organizers wrote in a statement. “They will also call on Congress to defund the US Department of Homeland Security, which is carrying out the president’s hateful agenda against immigrants.”

At the protest, dozens of people were packed into the rotunda of the building, holding signs that denounced Trump’s immigration policies, and quoted verses from the Bible. In the center of the demonstration, a group children draped in Mylar survival blankets—the same type immigrant children in shelters were given—sat down on the floor. “The thought of any children in cages breaks my heart,” Nan Collie, whose 9-year-old granddaughter was one of the children on the floor, told CNN. “It was really powerful for us to be here today together to make that statement.”

The children on her floor are wrapped in Mylar blankets—the same kind children detained at the border are given. pic.twitter.com/eIDJLImsy0

Clergymen lead the crowd in prayer as reporters and bystanders scurried around taking pictures. In a tight circle, the crowd sang “Hallelujah” slowly changing the lyrics to include the phrase, “Protect children.”

Participants did not have a permit for this demonstration and were warned they needed to leave by the Capitol Police. When Capitol Police issued their second warning, the children were lead out first, but the adult protestors stayed behind to chant “Shame!” loudly enough that the staffers in the Senate offices could hear.

The protest ends with a rousing chant of “shame.” pic.twitter.com/PBBHB8Sqt4

Once the protest wrapped up, volunteers slowly ushered the crowd outside the regroup and debrief with the demonstration organizers. “It’s barbaric,” Steph Black, an American University student who participated in the demonstration told Mother Jones. “Moving people from one cage to another doesn’t change anything.”

But the faith leaders who protested today are not alone. Several prominent white evangelical leaders have denounced Trump’s family policy at the border, and the United Methodist Church, is considering ejecting Attorney General Jeff Sessions, who has been one of its most prominent members. Black, who found herself in tears during the demonstration, has found some reason for optimism, said, “I’ve been given hope by people who are saying this is enough.”