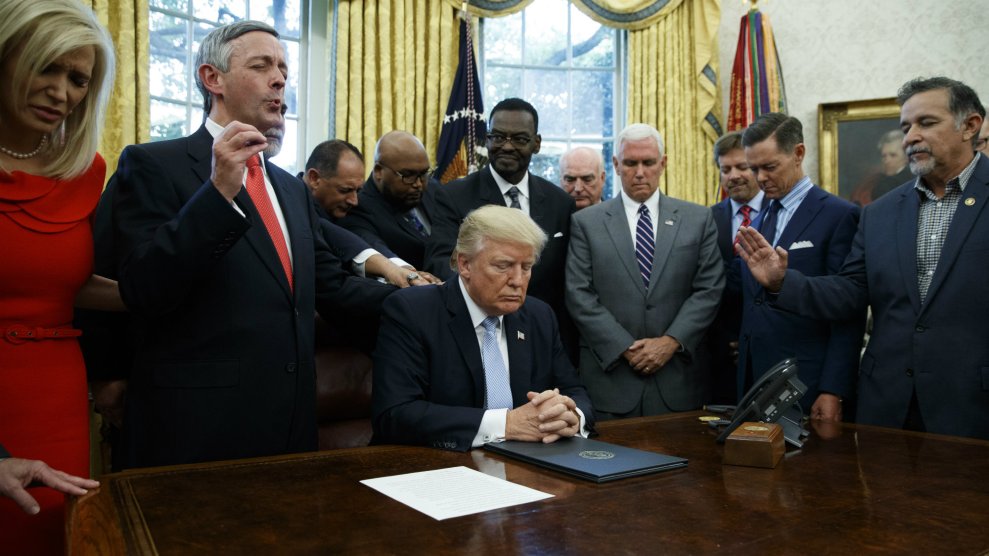 Faith leaders pray over Trump at the White HouseEvan Vucci/AP

In April, white evangelical support for Trump was at an all-time high. Seventy-five percent had a favorable view of the president, much higher than the 42 percent he enjoyed among all Americans. But the group that helped send Trump to the White House and has stood with him through every scandal and accusation of racism and bigotry, may finally be starting to splinter, thanks to the administration’s zero-tolerance immigration policy that has separated children from their parents.

In May, US Attorney General Jeff Sessions announced a new policy directive to address the flow of undocumented immigrants across the Mexican border: The federal government would be prosecuting anyone trying to cross without the proper paperwork, and children would be separated from their families. “If you cross this border unlawfully, then we will prosecute you. It’s that simple,” he said. “If you are smuggling a child, then we will prosecute you and that child will be separated from you as required by law.” In just six weeks, nearly 2,000 children have been separated from their families at the border. Images of crying children as young as two being taken from parents, or others of children placed in cages in holding cells, have dominated the media over the last several days.

As the stories multiplied of the suffering of these children, members of Congress traveled to the facilities where the youngest victims of the new policy are being held. Meanwhile, the Trump administration sought to do damage control by asserting that what they were doing was lawful and not cruel.

Last week, Sessions decided to invoke a biblical justification for the actions when he was speaking to law enforcement officials. He cited Romans 13: “Let everyone be subject to the governing authorities, for there is no authority except that which God has established.” But when he said, “the authorities that exist have been established by God,” to justify separating children from their parents at the border, he ignited a firestorm of protest from immigrant advocates. Many of his critics noted that the passage he chose was also used in the 19th century to defend slavery and in the 20th century by German theologians to justify Hitler.

Even before Sessions quoted the Bible, a small group of Christian leaders from the Council for Christian Colleges and Universities and several different denominations had sent Trump a letter voicing their concern with the policy. “As evangelical Christians guided by the Bible, one of our core convictions is that God has established the family as the fundamental building block of society,” the eight signatories wrote. “The traumatic effects of this separation on these young children, which could be devastating and long-lasting, are of utmost concern.”

“As evangelical Christians guided by the Bible, one of our core convictions is that God has established the family as the fundamental building block of society. The traumatic effects of this separation on these young children…are of utmost concern.”

Even a few of those religious leaders who have consistently aligned themselves with Trump are beginning to speak out against the policy. Franklin Graham, one of Trump’s most prominent supporters, the son of the legendary Rev. Billy Graham and the head of the Samaritan’s Purse, an international relief organization, said on the Christian Broadcasting Network that the policy was disgraceful. “It’s terrible to see families ripped apart,” he said, “and I don’t support that one bit.”

He was not alone. Tony Suarez, the executive vice president of the National Hispanic Christian Leadership Conference and an informal advisor to Trump tweeted about the issue.

God have mercy on those that seem so nonchalant to the plight of children being separated from their parents.

Jentezen Franklin, a pastor who is a part of Trump’s evangelical council and stood by the president after white supremacists marched in Charlottesville, Virginia, plainly stated that Sessions was wrong to use the Bible to justify the policy. “It’s a very dangerous route to go when you begin to take selections of scriptures and say ‘the Bible was written to justify political standings,'” Franklin said in a CNN interview.

While some Christian leaders have openly opposed Trump’s policy, others continue to toe the line. Tony Perkins, the president of the Family Research Council, is choosing to stand with Trump and blamed the parents who come with their children. “It’s impossible to feel anything but compassion for these kids, who must be dealing with a great deal of pain and confusion,” Perkins wrote in a blog post. “But the origin of that pain and confusion isn’t US law or the Trump administration. That burden lies with their parents who knowingly put them in this position.

Earlier this morning, President @realDonaldTrump tweeted that "Democrats can fix their forced family breakup at the Border." pic.twitter.com/NsMFEqUj8J

Mark Burns, a prominent black Trump supporter and founder of the Harvest Praise & Worship Center in South Carolina, took to Twitter to equate separating children from their parents at the border to moving children in the United States to Child Protective Services after their parents are arrested.

I don't understand why the Left & #FakeNews is making such a big deal over Children being separated from a parent, WHO'S BREAKING THE LAW, at the border. Drug bust takes place in America EVERYDAY with kids present. Parent arrested, Child taken away by Child Protective Services.

During a White House press briefing following Sessions’ remarks, CNN’s Jim Acosta asked Press Secretary Sarah Sanders what the attorney general meant by his reference to Romans 13. While she said she was unaware of his comments, she saw no problem, adding, “It is very biblical to enforce the law. That is actually repeated a number of times throughout the Bible.”