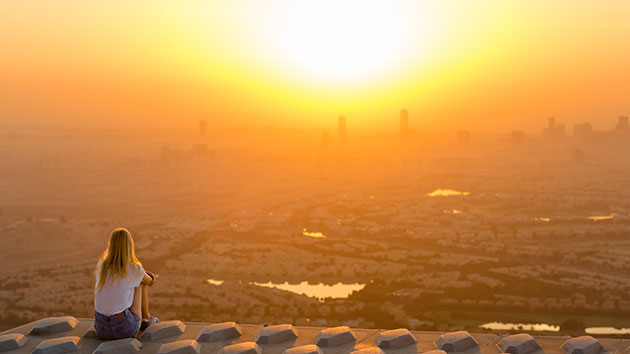 It seems like every few weeks there’s some new measurement of how successful solar power is in the United States. In early March, industry analysts found that solar is poised for its biggest year ever, with total installations growing 119 percent by the end of 2016. This week, federal government analysts reported that in 2015, solar ranked No. 3 (behind wind and natural gas) in megawatts of new electricity-producing capacity brought online. That rank is even more impressive when you consider that each individual solar installation is fewer megawatts than a wind turbine, and far fewer than a natural-gas plant; that means solar panels are popping up like crazy across the country.

Which makes you wonder: Is there a limit to that growth? According to a new report from the National Renewable Energy Laboratory, a federal research outfit, there’s good news and bad news. The bad news: Yes, there is a ceiling for solar power in the United States. The good news: We’re not even remotely close to reaching it. In other words, solar’s potential has barely been tapped.

The bad news: Yes, there is a ceiling for solar power in the United States. The good news: We’re not even remotely close to reaching it.

The report is the deepest dive on solar’s potential since NREL conducted a similar analysis in 2008. The new report’s estimate is much larger than the older report’s, mostly because of vast new troves of satellite imagery data of the country’s rooftops and computer models that are better able to calculate how much power each panel can produce. The analysis leaves behind policy and cost considerations. Instead, the only question is: How much power could we really get if we slathered every roof in America with solar panels? The answer: about 39 percent of the country’s electricity consumption, at current levels.

It’s important to note that the report looks only at rooftop panels, as opposed to utility-scale solar farms. Utility-scale solar provides about twice as much power as rooftop panels, so the full potential of solar is likely even higher than what NREL describes in this report. Even 39 percent, though, would be a revolutionary change from where we are now; despite solar’s rapid growth in the last several years, it still accounts for less than 1 percent of electricity consumption. Coal, which is still the nation’s No. 1 energy source, commands about 32 percent of the market. So the future that NREL is envisioning here would basically flip our energy makeup on its head.

The most potential exists in sunny states, obviously, but also in states that have relatively low electricity needs. The map below shows what percentage of each state’s power could be derived from rooftop panels if they were fully utilized: 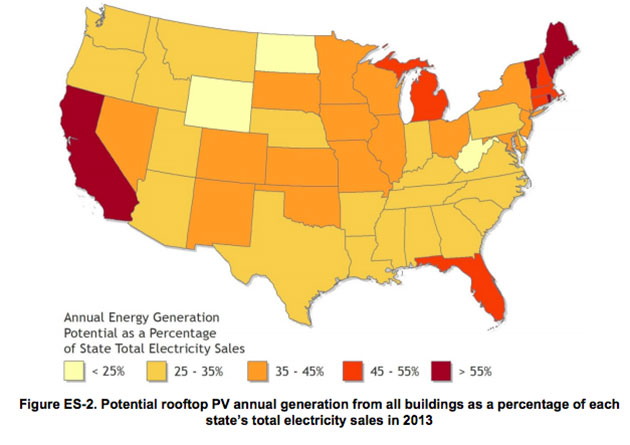 Again, NREL stresses that the estimates here “provide an upper bound on potential deployment rather than a prediction of actual deployment.” It’s very unlikely that this exact scenario will come to pass. The most recent study by Stanford energy economist Mark Jacobson, who researches ways the United States could get 100 percent of its power from renewable sources, sees rooftop solar contributing about 7 percent of total electricity by 2050. And that’s with, as Vox‘s David Roberts put it, “enormous, heroic assumptions about social and political change.”

But hey…we’re dreamers of the golden dream, right?