Not the panels you put on your roof. Those are doing fine, but the real action is in medium-size solar arrays installed by utilities. The big news, Roberts says, is that utilities are starting to build solar plants even when state mandates don’t require it. They’re doing it 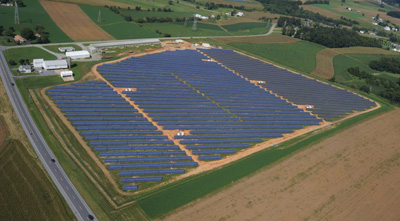 because solar has finally gotten to the point where it’s cost effective all on its own:

The installed cost of big solar has fallen 50 percent since 2009, from $6.30/W to around $3.10/W at the end of 2014. Some projects were down as low as $2/W….The stretch goal of the Department of Energy’s 2011 Sunshot Initiative is to drive installation costs down to $1/W, which it says “would make solar without additional subsidies competitive with the wholesale rate of electricity, nearly everywhere in the US.”

The CEO of First Solar recently said that “by 2017, we’ll be under $1.00 per watt fully installed on a tracker in the western United States.” It appears costs are falling faster than almost anyone predicted.

Roberts points out two other benefits of solar. One is predictability: you don’t have to worry about volatile coal or gas prices. With solar, you know the capital and operating costs going forward for decades, and that makes planning a lot easier.

The second is political. In the same way that defense contractors like to make sure that every state gets a piece of big contracts, it helps when every state is seeing solar take off: “The more states where large-scale solar is a business interest, the more respect and assistance it will get from state politicians. As Jack Fitzpatrick notes in Morning Consult, ‘The number of U.S. House Republicans representing districts where there are utility-scale solar facilities increased from a measly 12 in 2008 to 88 in 2016.’ There are now as many Republicans as Democrats with solar power plants in their districts.”

Solar is not a panacea all by itself. To state the obvious, it only works when the sun is shining. But in combination with better storage technologies, other clean sources of electricity (wind, geo, etc.), and nuclear for baseload operation, a green electric grid is no longer a pipe dream. By 2020 solar will probably be the cheapest electric source around, and by 2040 I wouldn’t be surprised if fossil fuel electric generation is basically dead in the US. Welcome to the future.