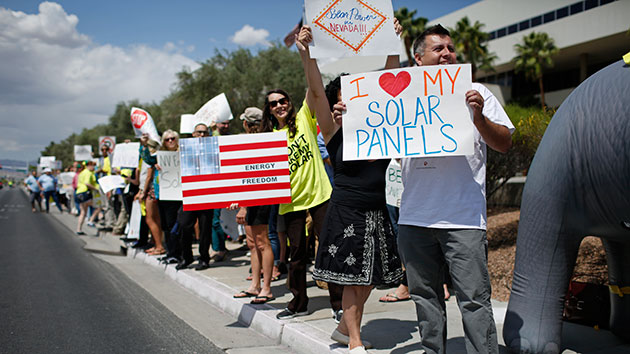 Last month, solar power suffered a major blow in Nevada. Under pressure from the state’s largest electric utility, NV Energy, state regulators agreed to drastically roll back a key financial incentive for rooftop solar installations. The move, which applied both to new solar users and to homes already equipped with panels, could leave existing customers on the hook for thousands of dollars in higher electricity costs. It also obliterated the economic case for prospective solar buyers. And it prompted a mass exodus of solar contractors in the state with the most solar jobs per capita. SolarCity, the country’s largest solar installer, fired 550 workers; two of its main competitors, Vivant and Sunrun, plan to shut down their Nevada operations.

Now, the fight over solar could become an important issue in the presidential election.

The fight over solar could become an important issue in the presidential election.

The controversial public utility commission decision relates to net metering, the policy that allows homeowners to sell the excess electricity from their solar panels back to the utility at set prices. Most states have adopted some form of net metering. It enables solar customers to defray their upfront costs and has been widely credited as a major driver of America’s solar boom. But the policy is generally loathed by utilities, who not only lose a customer but have to pay that lost customer for their power. In response, utilities and their allies in conservative think tanks such as the American Legislative Exchange Council have waged a nationwide battle against net metering, particularly in sunny states like Arizona and Florida. The Nevada decision is one of the utilities’ biggest victories yet: It allows them to raise the flat monthly fee on solar customers threefold by 2020, from $12.75 to $38.51. It also reduces the net metering credit by 18 percent. This is especially harmful to customers who made big investments in solar under the expectation that it would generate big savings into the foreseeable future.

Since the decision, solar has been one of the top headlines in Nevada. The change has been decried by local solar contractors, their customers, and environmentalists. Two homeowners have filed a class-action lawsuit against NV Energy (owned by Warren Buffett’s Berkshire Hathaway), and a coalition of solar companies known as the No Solar Tax PAC is pushing a ballot measure that would reverse the regulators’ decision.

The Nevada caucuses are just around the corner, Saturday for Democrats and this coming Tuesday for Republicans. Solar enjoys widespread support from Nevada voters in both parties: A poll last month from Colorado College found that 75 percent of voters in the state support tax incentives for solar, while a solar-industry-commissioned poll last year found that 69 percent of Nevada Republicans and 80 percent of Nevada Democrats wouldn’t vote for a candidate who doesn’t support pro-solar policies.

“The fallout [from the solar decision] has been so severe on both sides of the aisle,” said Barbara Boyle, a Sierra Club staffer in Nevada. “I think there’s going to be a lot of activity in the caucuses related to the issue.”

On Tuesday, the Alliance for Solar Choice, a lobbying group backed by SolarCity and Sunrun, emailed a memo to thousands of solar supporters in Nevada urging them to “make sure [the presidential candidates] can’t avoid this issue.” Democrats Hillary Clinton and Bernie Sanders have already charged into the fight. Last week, Clinton issued a statement expressing her support for federal legislation that would limit states’ ability to raise fees for existing solar users, as was done in Nevada:

On Monday, Sanders met face to face with a group of solar workers in Reno, where he called the regulators’ decision “incomprehensible” and encouraged solar supporters to petition Buffett to back down.

Eli Smith, who operates a small solar installer in Reno called Black Rock Solar, attended the meeting with Sanders. He said that although no presidential candidate can offer much of an immediate remedy to the state’s solar woes, he plans to support Sanders in the caucus because he has “the kind of commitment I personally look for” on clean energy issues.

Smith added that he was surprised that thus far, the Republican candidates “aren’t even acknowledging the issue,” given solar’s bipartisan appeal in Nevada.

Indeed, none of the GOP contenders have weighed in on the controversy yet, and they didn’t respond to requests for comment for this story. A few have come close: In New Hampshire, John Kasich said it’s “not acceptable” to slow the development of solar, and Marco Rubio said the United States should be “number one” in solar (although his proposed energy plan focuses on promoting fossil fuel extraction and ignores renewables). In South Carolina on Tuesday, Donald Trump suggested that because his campaign is self-funded, he wouldn’t be held captive to the interests of utilities, as some environmentalists have suggested Nevada Gov. Brian Sandoval (R) is:

Avoiding this issue would be a big missed opportunity for Republicans in Nevada, said Debbie Dooley, whose Green Tea Party group organizes conservative support for solar because it represents “energy choice” and freedom from monopolistic utilities. Dooley is in Nevada this week working to promote the No Solar Tax PAC’s ballot measure. She said she expects Republicans to take up the issue once they make it past the South Carolina primary on Saturday.

“If I were a presidential candidate, I would certainly come out and start talking about energy freedom and energy choice,” she said. “I think the person that does grab hold of it will gain votes.”