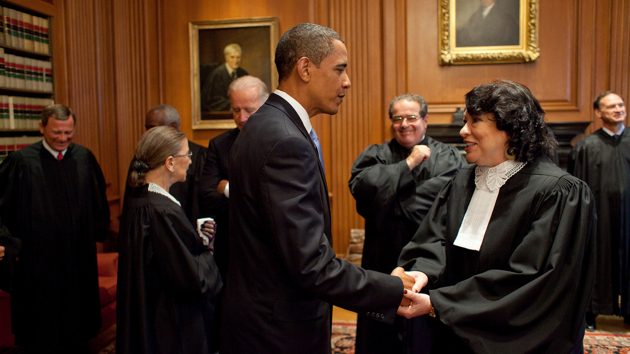 Supreme Court nominations, thanks to a lifetime appointment if confirmed, are always one of the most important parts of presidential administrations elections but rarely get much attention on the campaign trail. But at a campaign stop in Iowa City Friday afternoon, Ben Carson suggested to caucus voters that they had a new reason to fear Hillary Clinton becoming president: put her in the White House and you’ll end up with Barack Obama on the Supreme Court.

If there’s “another progressive president,” Carson said, “and they get two or three Supreme Court picks—one of them being Obama—America’s toast. Your children and grandchildren, they’re toast.”

Carson isn’t the first candidate to suggest this possibility—from either party. Earlier this week, Hillary Clinton said she would consider nominating Obama to the Supreme Court when she was asked about putting Obama on the bench at a town hall in Iowa. “I mean, he is brilliant and he can set forth an argument,” she said. That proved to be fodder for Sen. Marco Rubio at Thursday night’s debate. “Hillary Clinton this week said Barack Obama would make a great Supreme Court justice,” Rubio said. “The guy who systematically and habitually violates the constitution on the Supreme Court? I don’t think so.”

In terms of campaign trail fear mongering, it’s actually not a crazy suggestion. Obama did, after all, teach constitutional law classes before entering politics full-time. And he wouldn’t be the first president-cum-justice, though it’s been quite a long while since the last one, nearly a century. Only William Howard Taft has made that transition, appointed in 1921. But, as MSNBC’s Steve Benen noted, Obama told The New Yorker in 2014 that being a judge would “a little bit too monastic” for him. The White House also shot down the idea earlier this week.