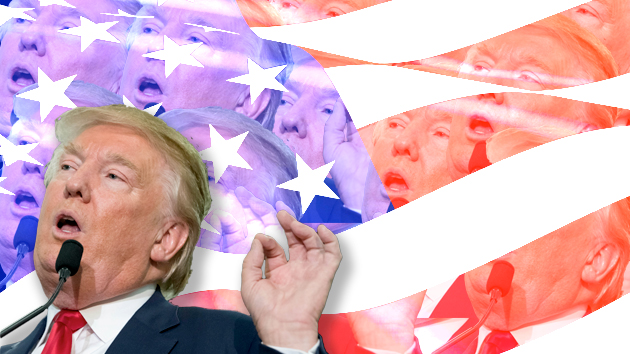 On Monday, Donald Trump unveiled a plan to block Muslims from entering the United States. On Tuesday, he suggested he might have been okay with the internment of Japanese-Americans during World War II.

Almost immediately, critics looked for historical parallels. The Philadelphia Daily News put him on its front page with the headline “The New Furor,” while the New York Daily News‘ Shaun King wrote that Trump has gone “full-blown Nazi.” Even Harry Potter author J.K. Rowling got in on the game, calling Trump worse than Voldemort.

Comparing Trump to Hitler doesn’t really do justice to what made Hitler Hitler, but it also lets the country off the hook. Trump isn’t introducing the idea of discriminatory immigration bans and internment camps to an innocent nation. These are American ideas, with a long dark history of being used in American elections by politicians we now hold in high esteem. As one of Trump’s New Hampshire co-chairs, state Rep. Al Baldasaro, put it, improbably in defense of Trump, “What he’s saying is no different than the situation during World War II, when we put the Japanese in camps.”

It’s a history worth grappling with, because as Richard Reeves’ 2015 history, Infamy, makes clear, Franklin Roosevelt’s Civilian Exclusion Orders were deeply influenced by the pressures of electoral politics. It was a governor’s race in California that brought the issue to the fore in 1942. Two years later, it was a looming presidential election that compelled Roosevelt to keep the camps open long past the time the government knew they were unnecessary.

White California politicians had for years used the presence of people of Japanese descent as a political wedge, but the matter blew up after Pearl Harbor. Ironically, Reeves explains, the push for internment started with a man who would one day become a liberal icon as a Supreme Court justice, then-California Attorney General Earl Warren:

The first public call for all American Japanese, aliens and citizens, men, women, and children, to be moved into “concentration camps” was on January 14, 1942, in the Placerville Times, the newspaper in a small town forty miles east of Sacramento. Two weeks later, on January 29, California’s attorney general, Warren, who had been an important voice for moderation essentially switched sides, issuing a press release that read, “I have come to the conclusion that the Japanese situation as it exists in this state today, may well be the Achilles Heel of the entire civil defense effort. Unless something is done it may bring about a repetition of Pearl Harbor.”

Governor Olson, a Democrat who expected that Warren, a Republican and a member of the whites-only Native Sons of the Golden West, would be his opponent in the election of November of 1942, did the same thing, testifying before a congressional hearing a week later, saying: “Because of the extreme difficulty in distinguishing between loyal Japanese-Americans, and there are many who are loyal to this country, and those other Japanese whose loyalty is to the Mikado, I believe in the wholesale evacuation of the Japanese people from coastal California.” Then he gave gave a statewide radio address, saying, “It is known that there are Japanese residents of California who have sought to aid the Japanese enemy by way of communicating information or have shown indications of preparation for Fifth Column activities.”

Other elected officials were happy to inflame Californians’ fears of the Japanese other. One congressman proposed sterilization; another called the conflict with Japan a “race war.” Advocates for internment didn’t just defend it as an extraordinary circumstance—they described it as wholly consistent with American ideals. Per Reeves:

In Los Angeles, Mayor Fletcher Bowron, after dismissing all employees of Japanese lineage, declared, “Right here in our own city are those who may spring to action at an appointed time in accordance with a prearranged plan wherein each of our little Japanese friends will know his part in the event of any possible attempted invasion or air raid…We cannot run the risk of another Pearl Harbor episode in Southern California.” He later added, “There isn’t a shadow of a doubt but that Lincoln, the mild-mannered man whose memory we regard with almost saint-like reverence, would make short work of rounding up the Japanese and putting them where they could do no harm.”

Not unlike Trump’s false claim of seeing “thousands” of Muslims in New Jersey celebrating the 9/11 attacks from rooftops, the hysteria over the Japanese-Americans was fueled by a number of false reports over their activities, including allegations from coastal residents who swore they’d heard their Japanese neighbors sending radio signals to the enemy. And it wasn’t just California politicians feeling the electoral pressure to put Americans in camps. As Reeves tells it, Roosevelt knew as early as May 1944 that the Japanese Exclusion Orders were unnecessary, and that it would be okay to shut down the camps. Interior Secretary Harold Ickes told him that keeping the camps open would be a “blot upon the history of this country.” But FDR had the voters to consider:

Two weeks later Roosevelt refined his thoughts in a memo to [Secretary of State Edward Stettinius] and Ickes: “The more I think of this problem of suddenly ending the orders excluding Japanese Americans from the West Coast the more I think it would be a mistake to do anything drastic or sudden. As I said at Cabinet, I think the whole problem for the sake of internal quiet, should be handled gradually.” Ickes and the others knew what he meant: after the elections.

It was easy for politicians to invoke internment as a logical solution to fears of a Japanese “fifth column,” in part because the nation already had a long and proud history of wholesale discrimination against people of Asian descent. Just 18 years earlier, Calvin Coolidge had signed the National Origins Act, which effectively barred immigration from East Asia and the Middle East, on top of the existing prohibition of Chinese immigration that had by that point been on the books for four decades. Trump is successful not because he’s mastered the German formula, but because he’s tapping into something that has proven successful before in American history.