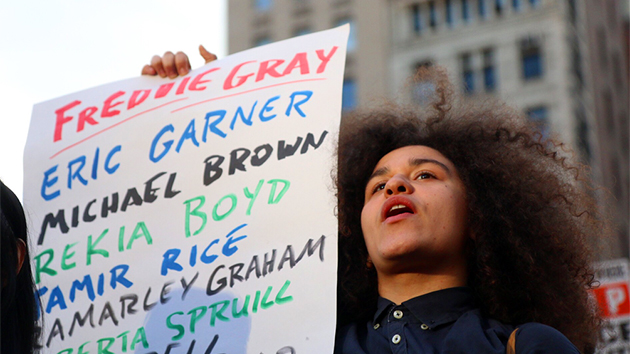 Several hundred people gathered on Wednesday evening in New York City’s Union Square in solidarity with protesters who took to the streets of Baltimore after the death of Freddie Gray, a 25-year-old black man who died in police custody after suffering a spinal injury.

The demonstrators converged on Union Square at 6 p.m., with many chanting “No justice, no peace!” and “How do you spell racism? N-Y-P-D.” Some in the largely disorganized yet agitated group waved signs that read “Black Lives Matter” and asked “Why is Freddie Gray Dead?” in the city’s first major display since clashes between Baltimore residents and police broke out over the weekend. The riots left at least a dozen police officers injured and devastated local businesses and buildings, leading to remarks on the situation from athletes, Hillary Clinton, and President Barack Obama.

More photos from Union Square right now. Speeches, signs, and a feeling things will move in the last 45min of light. pic.twitter.com/n4NjwJGEVN

New York City police, in an effort to manage the crowd, handed flyers to protesters in Union Square noting they were “not permitted to walk in the roadway or street.” A reporter on the ground witnessed skirmishes with police and at least one arrest.

#NYPD handing out these warning flyers to the crowd at Union Sq for the #FreddieGray #NYC2Baltimore pic.twitter.com/06G8MWbdYt

Dramatic arrest including a NYPD pile on here. NYPD different from last time: very little tolerance of anything. pic.twitter.com/fwgSckwk8q

Scores of police were active in keeping protestors confined to sidewalks. Mother Jones witnessed a handful of arrests shortly after protestors began to leave Union Square: 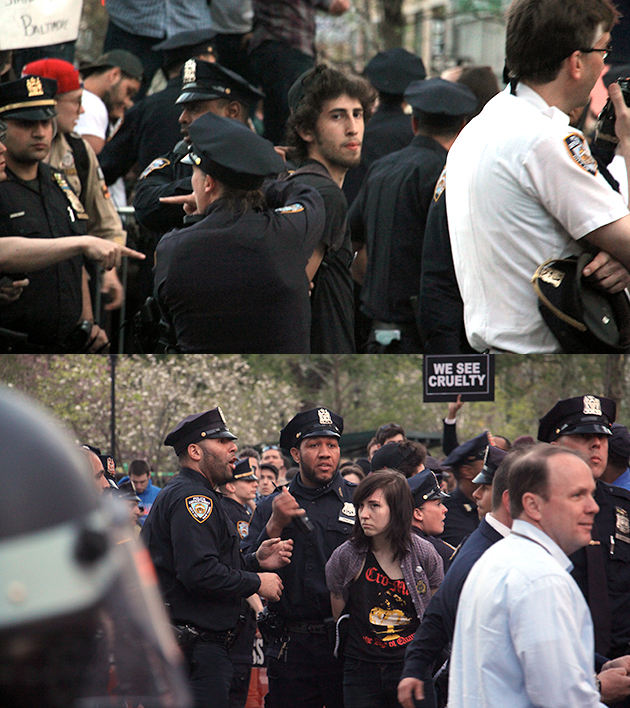