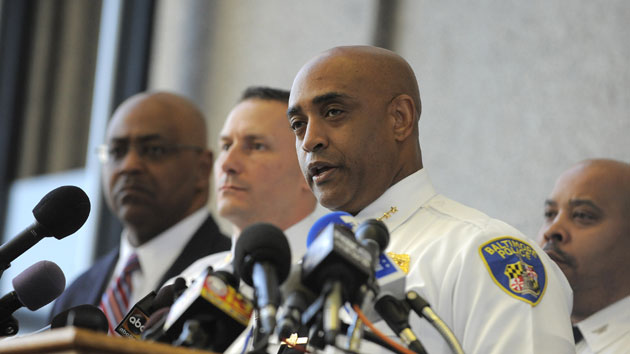 Baltimore police chief Anthony Batts was riding along with a patrol last May when his officers spotted an object in the shape of a handgun bulging out of the pocket of a man they’d stopped. As recounted later by Baltimore’s CBS affiliate, the man struggled with the officers, and pulled his gun. In response, Batts drew his service weapon and put it to the suspect’s head. When the suspect attempted to move Batts’ firearm out of the way, the city’s highest-ranking law enforcement officer punched him in the face—and secured the illegal firearm in the process. A triumphant police department quickly took to Twitter to boast of its boss’ exploits:

The move was typical of Batts, a hands-on chief with a history of leading troubled police departments who now finds himself at the center of the unrest ignited by the death of Freddie Gray in his department’s custody. Batts took over the Baltimore Police Department in 2012 shortly after the death of Anthony Anderson at the hands of arresting officers, and set about attempting to rehab his department’s image while establishing his own cred as an outsider in a new city. He came up through the ranks of the Long Beach, California, police department, and arrived in Maryland fresh off a tumultuous four-year stint as Oakland’s police chief, where he took over a department that had been subjected to federal monitoring as part of a 2003 court settlement over rampant abuses. Batts was tasked with curbing the Oakland Police Department’s excesses. The results were mixed.

When officers shot and killed an unarmed East Oakland resident, Derek Jones, in 2010, Batts asked the FBI to conduct its own investigation of the homicide. According to the San Francisco Chronicle, the move infuriated rank-and-file officers, who cast Batts as a “showboat” who didn’t go to bat for his officers, and then jumped ship when the going got tough. Batts had his doubters outside the force too. In 2012, shortly after Batts resigned as Oakland’s chief, a federal judge ruled that despite his promises of reform, the department still lagged well behind the benchmarks enacted as part of the 2003 settlement. As a result, the judge gave the department’s federal monitors expanded authority to clean the outfit up:

It was only after Batts arrived in Baltimore that Oakland began to pay a literal price for his former department’s actions. In 2013, judges handed down a $1 million judgment against the Oakland Police Department and Alameda County Sheriff’s Office over their treatment of residents protesting the 2010 verdict in the shooting death of Oscar Grant at a Bay Area Rapid Transit station.

When Baltimore Police Commissioner Anthony Batts appeared at a recent town hall meeting, a woman stood to ask about police brutality, a touchy topic for both residents and officers. She said she worried for her young nephew, who was frequently stopped by police.

Batts’ 10-minute answer ranged from the personal to the practical. He talked about his upbringing in South Central Los Angeles, drawing laughs about the fried bologna sandwiches his family ate to survive. He explained why people must sit cross-legged on curbs for officer safety, but understood police interactions can be demeaning for those detained.

“I can relate, because that’s where I come from,” Batts told the crowd of about 100 in a conference room at Good Samaritan Hospital. “But not all of my officers come from our communities, so we’re trying to give them the tools…so they can be more empathetic.”

The moment is one of many Batts has used to connect with his audience and craft a reputation of a commissioner who is focused on Baltimore’s communities.

Unlike Ferguson, Missouri, where a mostly white police force (and city government) that was used to having its way appeared at a loss for how to handle unrest, Batts won’t be caught off guard. He weathered the Los Angeles riots—23 years ago tonight—as a young officer in Long Beach, and negotiated often contentious showdowns between police and protestors in his short-lived stint in Oakland. After Monday’s riots, the city teetered but remained largely calm amid a Batts-enforced curfew. If he can’t rein in his force and keep the city quiet, it won’t be for lack of experience.