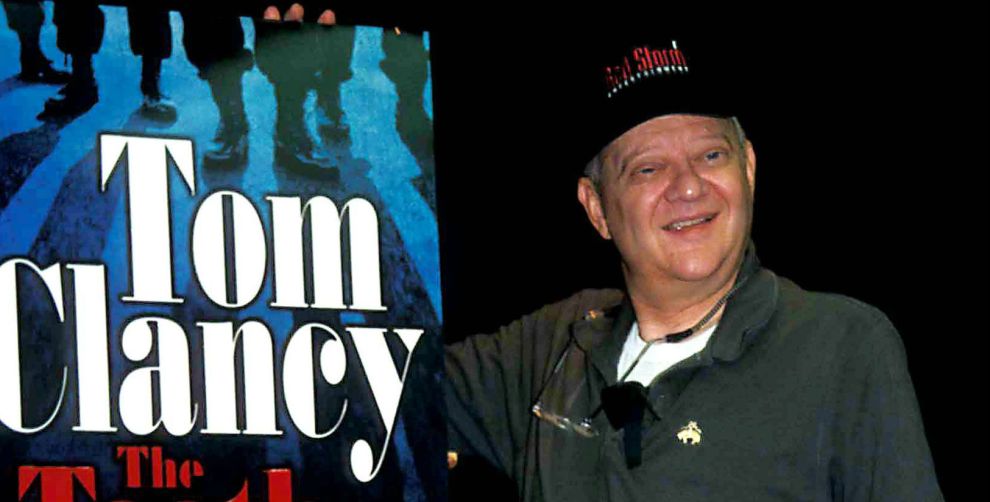 Tom Clancy, the American author famous for such thrillers as The Hunt for Red October and Clear and Present Danger, died Tuesday night at the age of 66. The Baltimore-born writer passed away at the Johns Hopkins Hospital following a “brief illness.”

Starting in the mid-1980s, Clancy built a one-man empire of books, film, and video games. His name has become synonymous with the spy and Cold War-era thriller genre of American popular fiction, earning him a net worth of around $300 million. His books were widely read, the movies adapted from his novels were often big hits, and his fame and ubiquity were enough for The Simpsons to feature him on the show twice (he even got to voice himself one time).

In a way, Clancy owed his great success to the United States Naval Institute. Years before The Hunt for Red October became a critically acclaimed, high-grossing film starring Sean Connery and Alec Baldwin, it was just another manuscript in search of a publisher. This was Clancy’s first novel, which he wrote in his 30s while working as an insurance salesman. After several rejections from mainstream publishing houses, the Naval Institute Press picked it up and paid Clancy a $5,000 advance in 1984. It was the first fictional work that the Institute had published, and it attracted the praise of President Ronald Reagan (one of Clancy’s political heroes), who called it, “my kind of yarn.” The success of this first novel propelled Clancy into the the stardom he enjoyed until his final days.

Politically, he was a hardened conservative. His earlier work was steeped in cold warrior mentality. For instance, here’s a map of international alliances in his 1986 World War III novel Red Storm Rising:

His conservative outlook remained intact after the Berlin Wall fell. Rainbow Six: Patriots, one of the video games in his franchise, features anti-Wall Street terrorists as the villains. (The announcement of this game coincided with the Occupy Wall Street movement.) Shortly after the 9/11 attacks, Clancy went on Fox News to bash liberal politicos for their dangerous and “politically correct” attitudes toward the intelligence community—attitudes he believed indirectly resulted in the tragedy of 9/11.

“The political left, they deal in symbols rather than reality,” he told Fox host Bill O’Reilly. “The general difference between conservatives and liberals is that liberals like pretty pictures and conservatives like to build bridges that people can drive across. And conservatives are indeed conservative because if the bridge falls down then people die, whereas the liberals figure, we can always build a nice memorial and make people forget it ever happened and was our fault. They’re very good at making people forget it was their fault…The CIA was gutted by people on the political left who don’t like intelligence operations…and as a result of that, as an indirect result of that, we lost 5,000 citizens last week.” (The death toll from the September 11 terror attacks was actually closer to 3,000.)

But more so than the aggressively Republican politics and his shrewd money-making, Clancy will likely be most remembered for the attention to detail he invested in his fiction. In 1985, Clancy’s sophisticated descriptions of weaponry and antisubmarine warfare in The Hunt for Red October prompted John F. Lehman, Jr., then Secretary of the Navy, to ask him who had ”cleared” him to use classified information for his book, according to the New York Times. ”If you were a naval officer, I would have you court-martialed because of all the classified information in your book,” Lehman told Clancy.

And for anyone hoping to learn to write with the kind of impressive technical detail for which Clancy is known, it would be wise to consult his advice to aspiring authors: “You learn to write the same way you learn to play golf,” he said. “You do it, and keep doing it until you get it right. A lot of people think something mystical happens to you, that maybe the muse kisses you on the ear. But writing isn’t divinely inspired—it’s hard work.”