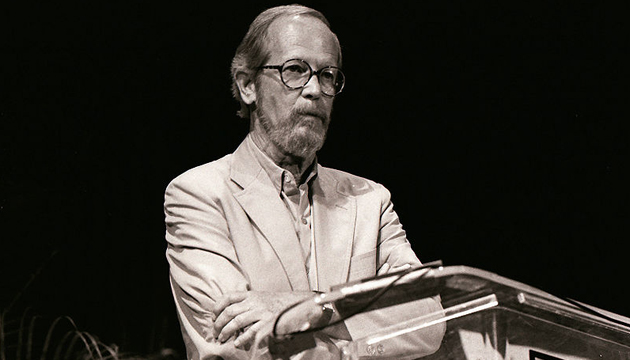 Elmore Leonard, in 1989.<a href="http://commons.wikimedia.org/wiki/File:Elmore_Leonard.jpg">MDCarchives</a>/Wikimedia Commons

The “Dickens of Detroit” is dead.

American novelist Elmore Leonard, 87, died Tuesday due to complications from a stroke he suffered last month. According to a brief statement on the author’s website, Leonard died at home surrounded by family.

If you’ve been to the movies in the past five-and-a-half decades, chances are you’ve seen a movie (probably multiple times) based on one of his books or stories. Leonard wrote the basis for Out of Sight, one of director Steven Soderbergh‘s best films. He wrote Get Shorty, which became one of the better movies of the John Travolta career revival. His book Rum Punch was adapted into the Quentin Tarantino’s Jackie Brown. His 1953 short story Three-Ten to Yuma was adapted into two films, one of which was inducted into the prestigious Criterion Collection. And his characters served as the basis for three television series, including ABC’s Karen Sisco and FX’s hit drama Justified.

Leonard’s gritty crime stories bridged the divide between two virtues of American writing too often viewed as being diametrically opposed: They were accessible and ready-made for mainstream mass consumption. They were also critically acclaimed for their no-frills style and wit, as well as beloved and studied by some of the English language’s most iconic writers. “Your prose makes Raymond Chandler look clumsy,” novelist Martin Amis gushed to Leonard. “How do you plane your prose into this wonderful instrument?”

Leonard will also be remembered for his famous tips for writers: “These are rules I’ve picked up along the way to help me remain invisible when I’m writing a book, to help me show rather than tell what’s taking place in the story,” Leonard wrote. Here are his 10 rules; I highlighted the most important one, and the one I agree with the most:

1. Never open a book with weather.

3. Never use a verb other than “said” to carry dialogue.

4. Never use an adverb to modify the verb “said.”

5. Keep your exclamation points under control.

6. Never use the words “suddenly” or “all hell broke loose.”

10. Try to leave out the part that readers tend to skip.

His wit and quirks extended well beyond his books and scripts. Last December, Leonard gave some of the most memorable responses ever given to the “Proust Questionnaire,” which is completed by celebrities and printed in the back pages of Vanity Fair. When asked for his motto in life, he responded, “keep it simple.” He claimed that quarterback Peyton Manning was the living person he most admired, and that he wanted to be reincarnated as Charlie Sheen. And when asked which historical figure he most identifies with, Leonard responded (possibly trolling) Nathan Bedford Forrest—the accused war criminal, Ku Klux Klan Grand Wizard, and namesake of Forrest Gump. (Leonard wrote the 1959 book Last Stand at Saber River, which references the atrocity at Fort Pillow, where Confederate troops under Forrest’s command slaughtered hundreds of surrendered black soldiers.)

There’s one part of the questionnaire that is especially relevant today: “How would you like to die?” asked* Vanity Fair. “Does it make a difference?” Leonard replied. “You’re dead.” Even more relevant is what he said last year, after learning he had won a National Book Award for lifetime achievement. Leonard assured his audience that he had no intention of giving up his craft until he reached the very end. “I probably won’t quit until I just quit everything—quit my life—because it’s all I know how to do,” he said. “And it’s fun. I do have fun writing, and a long time ago, I told myself, ‘You got to have fun at this, or it’ll drive you nuts.'”

Now here’s footage of Leonard discussing his rules for writing and dragging on a cigarette:

*As you can tell, I don’t adhere to Leonard’s writing tip #3.