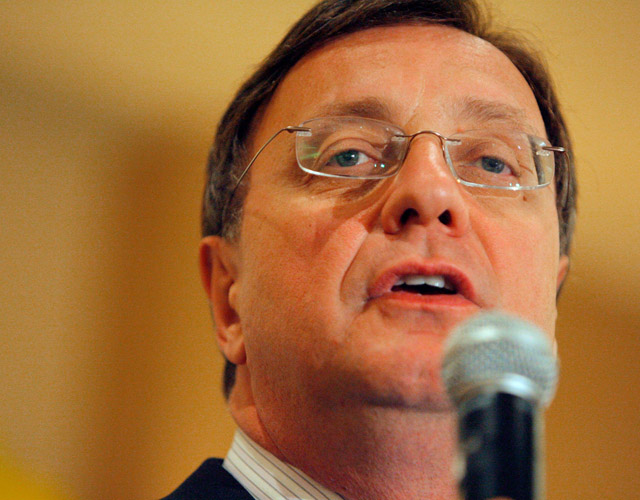 On October 16, Newark, New Jersey, Mayor Cory Booker will face a Republican politician and activist named Steve Lonegan in the special election to replace the late Sen. Frank Lautenberg (D-N.J.). You might have heard of Booker. He is a Democratic rock star: buddies with President Obama, beloved by Silicon Valley, name-dropped more than once as a future presidential contender.

So who is Steve Lonegan? From 1996 to 2008, he served as mayor of Bogota, New Jersey (pop. 8,241 in 2011), a small borough in Bergen County. In 2006, he took over the New Jersey chapter of Americans for Prosperity, the conservative nonprofit group founded and bankrolled by Charles and David Koch. Lonegan has none of the star wattage of his Democratic opponent. But he has earned more than his fair share of headlines for a steady stream of unabashedly extreme, hard-line comments about race and health care, Latinos and Social Security, and even Mitt Romney’s now-infamous 47 percent comment.

Here are six of the wackiest—and cruelest—comments that Lonegan has made over the years:

1. “I have a handicap, you know. I am a white guy running in the state of New Jersey.”

On August 8, Lonegan’s campaign tweeted: “Just leaked – Cory Booker’s foreign policy debate prep notes.” Accompanying the message was a picture of a map of Newark, but with areas of the city labeled as countries in Africa, South America, and the Middle East. The campaign quickly deleted the tweet after Booker and others called it racist and “deplorable.” Here’s a screenshot: 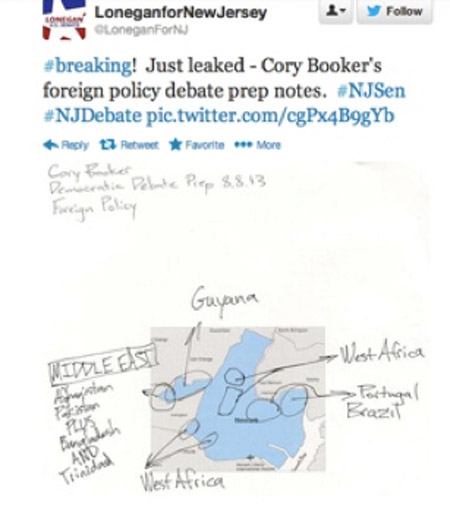 At a press conference, Lonegan, who said he didn’t approve of the tweet, nonetheless called the criticism “silly nonsense.” He went on to say, “I have a handicap, you know. I am a white guy running in the state of New Jersey. That is my handicap.”

While at the helm of AFP-NJ, Lonegan chided Gov. Chris Christie for not moving fast enough to reject Obamacare like conservative governors in other states. As a candidate, Lonegan made it clear that he wanted government out of the health care business in any way, shape, or form.

This is what he said at a debate on Obamacare in July 2011:

3. On Romney’s 47 percent comment: “It was the boldest thing he said in the campaign.”

During a September 2012 appearance on the show New Jersey Today With Mike Schneider, Lonegan was asked about GOP presidential candidate Mitt Romney’s 47 percent comment. “Well, I think it’s the boldest thing he said in the campaign,” Lonegan answered. “The problem is he didn’t back it up. Now, 47 percent, I don’t think, is the real number. I think it’s a much smaller number than that.”

Lonegan does not like Social Security. In October 2011, he lamented that Texas Gov. Rick Perry “didn’t stick to his guns” when he called Social Security a Ponzi scheme. He later added during that same interview that Social Security “was the biggest single threat facing America today. More than half of the federal government is Social Security and Medicare, and it’s going to bankrupt this country.”

5. A Spanish-language McDonald’s billboard was “divisive” and “unfair”…because it was written in Spanish.

When he was mayor of Bogota, Lonegan called for boycotting McDonald’s because the company put up a Spanish-language billboard promoting a new iced-coffee drink. Lonegan had no problem with iced coffee—he was angry that McDonald’s used Spanish. According to the Bergen Record, Lonegan wrote a letter on borough letterhead to McDonald’s saying the billboard was “divisive” and “unfair” because it suggested that immigrants and those who spoke Spanish didn’t need to learn English.

6. Don’t feel sorry for Hurricane Sandy victims because “every day, around this country, somewhere, somebody is suffering a tragedy of equal or worse impact and we don’t run and hand them a check.”

While Christie was running around New Jersey in his monogrammed fleece consoling Sandy victims, Lonegan was far from sympathetic. “That is tragic for them to see their home being destroyed,” he said, “but remember that every day around this country, somewhere, somebody is suffering a tragedy of equal or worse impact and we don’t run and hand them a check.”

Bonus: Lonegan was caught on camera flipping off the Republic Report‘s Lee Fang during a tea party rally. Watch: