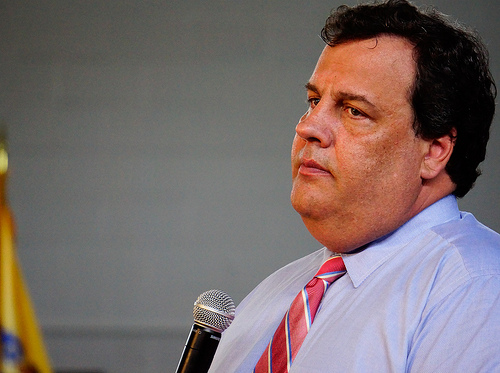 Conservatives are peeved at New Jersey Gov. Chris Christie, a GOP favorite, for praising President Barack Obama response to Hurricane Sandy days before the election. Some right-wingers even blame Christie for boosting the president’s prospects at the last minute. (Christie hugged Obama! How could he?!) Now, in the aftermath of the election, a powerhouse conservative outfit partly funded by the billionaire Koch Brothers is coming after Christie on another front, sharply questioning whether the governor will sell out conservatives in the latest battle over Obamacare.

The New Jersey Legislature passed a bill on October 18 creating a state-based online health insurance marketplace; it did so because under Obamacare a state must either create its own insurance marketplace or let the federal government do it. Christie vetoed a similar state-based insurance exchange bill in May, but he said last month he wouldn’t decide what to do about the new bill until after Election Day.

Enter the New Jersey chapter of Americans for Prosperity, the Koch-backed conservative grassroots group. AFP-New Jersey is pressuring Christie to reject the state exchange bill and rebuff Obamacare’s requirements before November 16, the date by which states must submit its health insurance plans to the federal government. Here’s what AFP-New Jersey Steve Lonegan had to say about Christie in a press release zapped out two days after the election:

Barack Obama has been re-elected. Congress will not be able to repeal the law so now the burden is on the states to thwart it. That means these bureaucratic and costly exchanges must be stopped, along with the tax increases that come along with them.

Other conservative governors across the country like Bobby Jindal, Rick Perry, Scott Walker, and others have already taken a principled stand. Where is Governor Christie? Will he stand with them? Will he prevent New Jerseyans from having their health care choices controlled by federal bureaucrats? Will he allow our state’s struggling businesses to be hammered by Obamacare’s tax penalties with unemployment hovering around 10 percent? Or will he continue to go along to get along with Barack Obama?

AFP-New Jersey seems suspicious about Christie. And that last line, of course, is a jab at Christie’s buddying up with Obama during Sandy’s aftermath. AFP-NJ is urging its supporters to lean on Christie by calling his office and signing an online petition demanding Christie say no to Obamacare.

This preemptive chastising of Christie is an odd turn in the Koch-Christie tale. The Koch brothers have long been fans of the governor. On June 26, 2011, as Mother Jones first reported, Christie delivered the keynote speech at Charles and David Koch’s ultra-exclusive seminar at the Ritz-Carlton resort near Vail, Colorado. At the event, David Koch hailed Christie as a “true political hero.” He noted,

Five months ago we met in my New York City office and spoke, just the two of us, for about two hours on his objectives and successes in correcting many of the most serious problems of the New Jersey state government. At the end of our conversation, I said to myself, “I’m really impressed and inspired by this man. He is my kind of guy.”

David Koch praised Christie for pushing legislation that took away the right of public workers to bargain collectively for health benefits and for pulling New Jersey out of a regional cap-and-trade market created by 10 Northeastern states to curb industrial greenhouse gas emissions. He expressed his hope of seeing Christie “on a larger stage where, God knows, he is desperately needed.”

That meant the 2012 presidential race. A September 26, 2011, New York Times article cited David Koch as part of a “small but influential group of Republican-leaning donors and activists” trying to coax Christie into the contest. The following month, though, Christie announced he wouldn’t run in 2012.

Might Obamacare cause a split between Christie and Kochworld? Christie has yet to say, post-election, what he will do regarding the health insurance battle underway in his state. But the Koch-funded AFP has certainly warned him that there will be a price to be paid for any further pro-Obama apostasy.