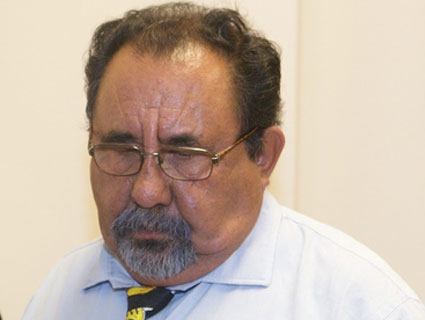 The immigration reform debate has heated up again this week on Capitol Hill, but a flurry of activity in the House on Wednesday ended with no clear path forward for comprehensive reform. In the words of Rep. Raul Grijalva (D-Ariz.), a member of the Congressional Hispanic Caucus and co-chair of the Congressional Border Caucus, “Who the hell knows what’s going to come out of [the House]?”

This morning Grijalva and other members of the Congressional Hispanic Caucus, all Democrats, met with President Obama at the White House to discuss reform. Later in the day, Nancy Pelosi (D-Calif.), the House minority leader, held a press conference with four members of the Congressional Border Caucus, including Grijalva, who voiced their concerns about the Senate bill’s $40 billion-plus border security measures and urged a more humanitarian approach. Meanwhile, from Dallas, former president George W. Bush, whose own immigration reform efforts fell short in 2007, urged Congress to reach a “positive resolution.” But the day’s most-anticipated event was a closed-door meeting of House Republicans who are unlikely to heed the ex-president’s advice.

Republicans emerging from Wednesday’s meeting indicated that they still plan to take a piecemeal approach, passing a series of law enforcement-centric bills through committees rather than a comprehensive bill mirroring the Senate’s. “Today House Republicans affirmed that rather than take up the flawed legislation rushed through the Senate, House committees will continue their work on a step-by-step, common-sense approach to fixing what has long been a broken system,” Rep. John Boehner (R-Ohio), the House speaker, said in a joint statement with other Republican leaders. (The House’s bipartisan “Group of Seven,” which includes three Republicans, has been working on a comprehensive bill but has yet to unveil it after a series of delays.)

Rep. Bob Goodlatte (R-Va.), who chairs the House Judiciary Committee, told reporters that Republicans remained concerned that the Senate bill’s border security measures don’t go far enough because they would not have to be implemented before up to 11 million undocumented immigrants are granted provisional legal status. As the Senate bill stands, Goodlatte said, Republicans worry that President Obama could unilaterally delay border security measures in a manner similar to his decision last week to delay the Affordable Care Act’s employer mandates. But any efforts to further restrict their path to citizenship could be a deal-breaker for Democrats, many of whom think the Senate bill is already too conservative and have decried such proposals as “poison pills.”

On Wednesday morning, before Obama’s meeting with the Congressional Hispanic Caucus, the White House released a report playing up the Senate bill’s economic benefits. Grijalva kept the details of the White House meeting under wraps at Pelosi’s press conference. “We all had an understanding with the president that the consequences of much of the very honest and blunt discussion was going to stay private,” he said.

Rep. Filemon Vela (D-Texas), who resigned from the CHC last week in protest of its support for the Senate immigration bill despite the border security measures, was also at the press conference but did not attend the White House meeting. Asked if Vela’s resignation was a sign of further splintering to come on the left, Grijalva said simply, “No.”