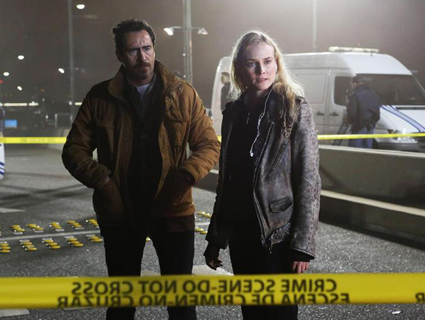 If you’ve heard of The Bridge, chances are good that you’ve heard it favorably compared to two cable-TV powerhouses: The Wire and Homeland. Given the fact that both are critical darlings—and that the former is frequently heralded as the greatest thing to ever happen on TV—this likely puts a hunk of pressure on creators Meredith Stiehm and Elwood Reid. (Stiehm is herself an alumnus of the Homeland writers’ room.) But if The Bridge‘s first three episodes are any indication, it might just have a shot at measuring up.

The new series (premiering Wednesday, July 10 at 10 p.m. ET/PT on FX) is a loose adaptation of the eponymous Danish/Swedish cop drama, which revolves around the murders of a Swedish politician and a Danish prostitute, and the subsequent murders. The cross-border premise was intriguing enough to warrant an upcoming British/French version, as well. The American incarnation kicks off at the Bridge of the Americas, a border crossing between Ciudad Juárez, Mexico and El Paso, Texas, where the remains of a controversial, anti-immigration American judge and a Mexican prostitute have been dumped. El Paso detective Sonya Cross (the reliably awesome Diane Kruger) and Chihuahua state police officer Marco Ruiz (the Oscar-nominated Demián Bichir) arrive on the scene to find the body parts literally straddling the painted border line. As the body count rises, and a mysterious man takes responsibility for the slayings, the detectives find themselves working closely together, in both jurisdictions. Ruiz is the troubled family man resisting the temptations of drug-cartel bribery, and Cross is the by-the-book hard case with Asperger’s. She is attentively watched over by her boss, Lt. Hank Wade (Ted Levine, who has a fair share of experience with detective shows and serial killers).

What may at first sound like another tired, gritty, and gimmicky police procedural briskly evolves into something sprawling and timely. The series examines the real-world problems of Juárez—an area where the drug war and killing is so bad that local businesses demand UN peacekeeping forces. The show offers a panorama of law enforcement officers, journalists, immigrants, drug lords, and ordinary citizens whose lives collide during the murder spree. And the butcher at the center of all this is a (supposedly) high-minded serial killer who uses slaughter to make social and political points: Will well-off American society pay more attention to the daily horrors south of the border if he brings that reality to the nation’s doorstep?

The Bridge unfolds as an intense, thoughtful look at human trafficking, drug cartels, police corruption, immigration, poverty, and border tensions—all wrapped up nicely in the form of a buddy-cop show.

Check out this TV spot for the new series: