A while back I downgraded my estimate of immigration reform’s chances from 50-50 to about one-third. In terms that Standard & Poor’s would understand, my objective, independent, rating of the bill dropped from BBB to B-. This week, however, it looks as though it’s entering junk bill territory:

The already narrow path to enacting comprehensive immigration reform pretty much disappeared in the past 24 hours.

At the Capitol, House Speaker John Boehner stated a specific policy preference Tuesday that will alienate the entire Democratic Party if he adheres to it….It amounts to a de facto endorsement of the conservative view that any steps to legalize existing immigrants should be contingent upon implementation of draconian border policies. As is Boehner’s custom, it also eschews the word “citizenship,” suggesting that even if Democrats agree to a trigger, he won’t guarantee that it would 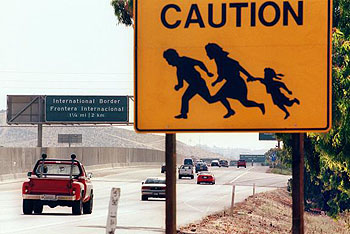 be aimed at a full amnesty program, and, thus, eventual voting rights for immigrants already in the U.S.

And then there’s this:

This morning, William Kristol and Rich Lowry, the editors of the two most important conservative magazines (the Weekly Standard and National Review) joined together to write an unusual joint editorial titled “Kill the Bill,” coming down in opposition to the “Gang of Eight” immigration bill that passed the Senate. The substance of their argument is familiar to anyone following this debate—the Obama administration can’t be trusted, it won’t stop all future illegal immigration, the bill is too long—but the substance isn’t really important. What’s important is that these two figures, about as establishment as establishment gets, are siding firmly with the anti-reform side.

Why are Republicans backing away from immigration reform? Probably because they never really liked it in the first place. But why are Republicans saying they’re backing away? Partly they’ve taken solace in Sean Trende’s “missing white vote” theory, which suggests that Republicans can gain more by increasing their vote share among whites than they can by appealing to Hispanics. And who knows? That might even be true in the short term. But in the last couple of days, critics have latched onto yet another argument: if President Obama can delay the employer mandate in Obamacare, then he can probably sabotage an immigration bill too if he feels like it. Steve Benen provides the summary:

The talking point appears to have started in earnest with this Washington Examiner piece from Conn Carroll, who argued that the Obama administration delayed implementation of the employer mandate in the Affordable Care Act — a move the right should, in theory, love — which proves the White House shows discretion when it comes to enforcing parts of major laws, which proves Obama might not enforce the border-security elements of immigration reform, which proves Republicans can’t trust him, which proves Congress should kill the bipartisan bill.

….[Rep. John Fleming] went on quite a rant yesterday, arguing, “Whatever we pass into law, we know he’s going to cherry-pick. How do we know that? … ObamaCare; he’s picking and choosing the parts of the law that he wants to implement. This president is doing something I have never seen a president do before: in a tripartite government with its checks and balances, we have lost the balances. We have a president that picks and chooses the laws that he wants to obey and enforce. That makes him a ruler. He’s not a president, he’s a ruler.”

All the signs of doom are here. Boehner is falling deeper into the tea party rabbit hole every day; the establishment has decided to cut its losses; the intellectual superstructure of opposition is gaining ground; and the hot-air crowd is finding ever more deranged conspiracy theories to rally the troops.

Immigration reform now has a C rating: “Currently highly vulnerable obligations and other defined circumstances.” It’s a hair’s breadth away from a D: “Payment default on financial commitments.” Let the death watch commence.