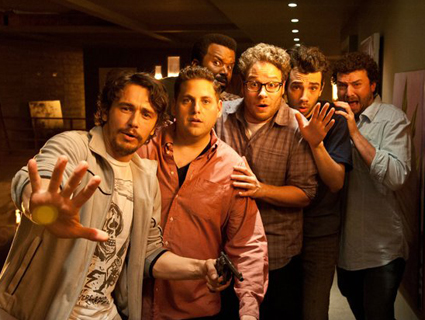 This Is the End
Columbia Pictures
85 minutes

You remember Left Behind, don’t you? It’s the Christian-apocalypse film series (based on the books) starring conservative activist and former Growing Pains star Kirk Cameron. The three film adaptations are critically panned train wrecks that portray the Rapture by casting a fictional United Nations secretary general as the Antichrist.

There is quite literally no fathomable reason for you to watch the Left Behind movies. But do go see This Is the End, which is essentially the same thing, only instead of bizarre and awful politics, there’s Emma Watson brandishing a gigantic ax.

The film stars a bunch of celebrities and Apatow-crowd comedians, mostly portraying oblivious, gleefully mean-spirited versions of themselves. Jay Baruchel is in Los Angeles to visit (and more importantly get epically stoned with) his pal and sometimes collaborator Seth Rogen. They soon head over to James Franco‘s house for an all-night rager, that includes Michael Cera snorting thick mounds of cocaine, having group sex, and sexually harassing Rihanna. Actors Jonah Hill, Danny McBride, Craig Robinson, and Emma Watson are there, as well, to engage in Franco-hosted hedonism.

All the sex and partying is abruptly halted when the Rapture commences. Good people are beamed up safely to Heaven, and bad people (like self-absorbed and debauched actors) are left to wallow behind on a planet now overrun by large demons, terrifying creatures, and cannibalistic hordes. James Franco’s party is further ruined when several of his guests—including Rihanna and Mindy Kaling—fall into a big hole in Franco’s front yard and are swallowed up by the lava-rich depths of Hell. The surviving partygoers barricade themselves in the house, and rapid-fire hilarity ensues.

The film nabbed an early Wednesday release, leaving the Friday premiere date wide open for the much-anticipated and (for the most part) humor-free Man of Steel. For my money, This Is the End is by far the better—and more thrilling—of the two.

Check out the trailer:

This Is the End gets a wide release on Wednesday, June 12. The film is rated R for crude and sexual content throughout, brief graphic nudity, pervasive language, drug use and some violence. Click here for local showtimes and tickets.