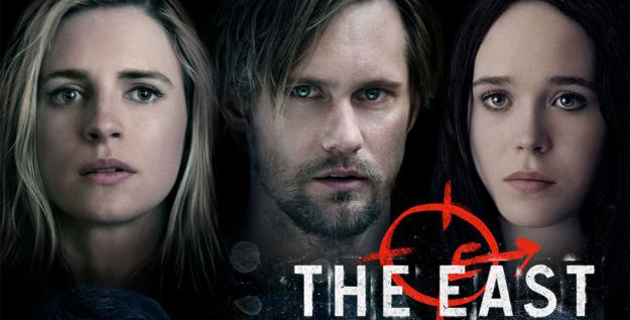 The East, a new thriller directed by relative newcomer Zal Batmanglij, follows an eco-terrorist collective that finds elaborate ways to punish CEOs and pharmaceutical companies for committing “worldwide terrorism.” The eco-terrorists, who call themselves The East, are infiltrated by Sarah Moss (played by Brit Marling), a former fed who works as an undercover operative for a private intel firm that looks out for rich polluters. A morally conflicted Sarah quickly comes to sympathize with East members including Izzy (Ellen Page), and grows increasingly attracted to their ringleader Benji (Alexander Skarsgård, of True Blood vamp fame). Bullets fly, sex in the woods occurs, and alliances are tested.

This political thriller is technically based on a true story. But the real-world inspiration for the script didn’t involve any shoot-out or corporate espionage; it started with a rather unusual summer road trip.

Marling and Batmanglij wrote the screenplay, drawing from their experience of traveling with an anarchist collective for two months in 2009. They spent the summer with barely any money in their pockets, and engaged in full-on freeganism, the practice of eating food others have tossed into the garbage or dumpster. This was all just for the hell of it, and it was only years later that they thought to put their story to cinematic use. “We couldn’t shake the feeling of that summer,” Marling tells Mother Jones. “We started writing about it really as a way of making sense of…what that summer had opened in us that we couldn’t close.”

Batmanglij notes that although people were interested in hearing about their anarcho-freegan exploits, they were “very resistant” to the idea of a movie that was all about “sleeping on rooftops,” dumpster-diving, train-hopping, and this wholesale rejection of materialism. That’s when they decided, according to Batmanglij, to fold their anecdotes into a fictional “thriller packaging in order to smuggle a lot of these ideas across the border, and make them more entertaining so people would not automatically get turned off to it.”

Glenn Beck declared that The East was helping to push American culture in the direction of “flat-out evil.”

As they filtered their tales through the prism of the action/thriller genre (taking cues from films like the chase-filled Bourne movies and the award-winning drama Michael Clayton), the cast and crew also dug into some of their favorite progressive literature and online journalism for ideas and inspiration. To get in the right mood to make this movie, Marling consulted news site Truthdig, the progressive wiki SourceWatch, and the work of environmental activist Derrick Jensen, who she praises as a “really eloquent writer.” Ellen Page, who plays a particularly dedicated and hardline eco-guerilla, turned to AlterNet and especially Democracy Now! because, in Page’s words, “Amy Goodman‘s amazing.”

But to set the tone for portraying an extremist collective, Batmanglij sent the actors copies of The Coming Insurrection (which Page jokingly referred to as the “Communist Manifesto” during the interview), a French anarcho/commie treatise from 2007 that was labeled a terrorist manual by the French government. The book was made famous on Fox News in July 2009 (the same time Marling and Batmanglij were out on their freegan adventures) by then host Glenn Beck, who railed against The Coming Insurrection as, “the most evil book I’ve read in a long, long time.” The airtime Beck dedicated to this immediately helped the book sell better.

As you could’ve probably guessed, the former Fox News host is not a fan of The East, either. In May, Beck commented on the trailer for The East (he had not seen the movie), and declared that the film was helping to push American culture in the direction of “flat-out evil.”

The East gets a wider release on Friday, June 7. The film is rated PG-13 for thematic elements, violence, some disturbing images, sexual content, partial nudity and flat-out evil, apparently. Click here for local showtimes and tickets.