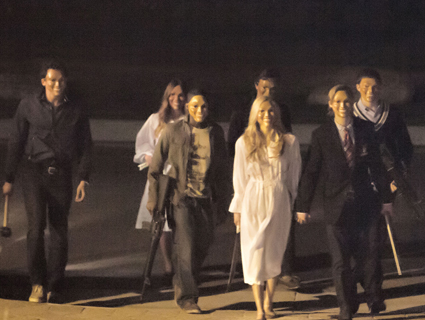 Murderous, poor-people-hating teenagers in "The Purge" (2013)Courtesy of Universal Pictures

The Purge, a bloody horror movie starring Ethan Hawke and Lena Headey, has as much to say about income inequality in 21st-century America as it does about triumphantly swinging an ax into the spine of an amoral, wealthy college kid who’s trying to kill your family.

The film takes place in 2022. An unseen cabal known as the “New Founding Fathers” rules over America. The main plank in their party platform is the institutionalization of “The Purge,” an annual night during which all illegal activity—murder, rape, robbery, jaywalking, you name it—is legal for a 12-hour stretch. The Purge was made official policy by the New Founders following a quadruple-dip recession that led to skyrocketing levels of crime and poverty. The idea was to give naturally violent human beings one night to vent their bloodlust and wrath. Cable TV talking heads claim that the annual nationwide orgy of violence and lawlessness has indeed brought down crime for the other 364 days of the year, and the New Founders brag of a flourishing economy and record low unemployment.

The Purge follows the Sandin family as they attempt to survive the night barricaded in their suburban estate. All is calm until a homeless black war vet (Edwin Hodge) shows up seeking sanctuary on their street, screaming about a masked band of Purge participants hell-bent on his execution. The Sandin parents and kids eventually help the man, which leads to a slaughter-fest with the marauding Purgers, who are almost entirely a bunch of well-armed, highly educated, ultra-privileged, jolly white kids.

“It’s a genre movie,” Jason Blum, The Purge‘s producer who has worked on films such as Lawless and the Paranormal Activity series, tells me. “There’s a political nature to it…but [my production company Blumhouse Productions and I] are in the business of making…scary movies, not political movies. But if there’s a political message baked into [the film], I won’t turn it down.”

Blum is correct in saying that it is, at its heart, a genre picture. The Purge (made by Michael Bay‘s horror-movie-centric production house Platinum Dunes, and written and directed by James DeMonaco) is really about Ethan Hawke’s family getting attacked in the middle of the night by a mob of ridiculous, bloodlusty college kids. But the film is also unavoidably, overtly, and intentionally political. On talk radio playing in the background, a couple commentators ponder whether The Purge might be nothing more than a means to exterminate all “non-contributing” members of society. They discuss how the “real victims” of the annual bloodbaths are the poor who “can’t afford to protect themselves.” And the leader of the homicidal, plutocratic teens (a Joker-knockoff played by Rhys Wakefield) refers to his wealthy cohorts as “the haves,” and the humane and homeless war veteran as a “pig” and social parasite. Basically, large chunks of the film scream the words, “INCOME INEQUALITY PLAGUING THE UNITED STATES” right into the audience’s faces. (And, as the New York Times‘ Manohla Dargis points out, the emblem for the New Founders of America, or NFA, resembles an NRA logo.)

But even more interesting are the somewhat problematic politics behind the film’s climactic sequence. When the “haves” invade the Sandin household, the family rightly starts mowing down the evil-as-shit Purgers. This involves Ethan Hawke shotgunning to death a pale, blonde girl who’s wearing a nightgown, and hurling a heavy blade into the back of her equally deranged boyfriend. For good reason, the most satisfying part of the movie is watching these sadistic children get what’s coming to them. However, there is something messy—Purge-like, if you will—about a film this political baiting its audience to cheer on the butchering of annoying, spoiled white kids, in large part, because they are such annoying and spoiled white kids.

Then again, this is a horror movie.

The Purge gets a wide release on Friday, June 7. The film is rated R for strong disturbing violence and some language. Click here for local showtimes and tickets.