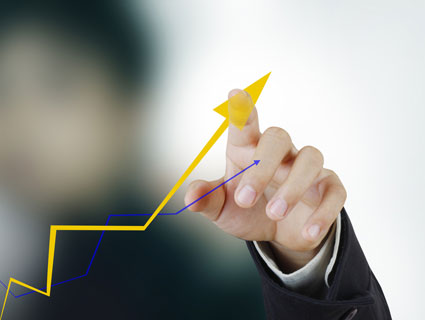 Unemployment hit a four-year low in April, according to new Bureau of Labor Statistics (BLS) numbers out Friday, and numbers for the first two months of the year were revised upward. But the situation is still difficult. Massive budget cuts have only just begun to take effect and could still drag on the recovery.

“While more work remains to be done, today’s employment report provides further evidence that the US economy is continuing to recover from the worst downturn since the Great Depression,” Alan Krueger, chairman of the White House Council of Economic Advisers, said in a statement Friday.

In April, American employers added 165,000 jobs, more than forecasters had projected, bumping the unemployment rate down from 7.6 to 7.5 percent. As my colleague Kevin Drum points out, “[A]bout 90,000 of those jobs were needed just to keep up with population growth, so net job growth clocked in at 75,000.”

Friday’s BLS report also revised up by 114,000 the jobs numbers for the prior two months, bringing average job growth for the last three months to 212,000. The news sent stocks soaring Friday morning.

Economist Dean Baker, cofounder of the left-leaning Center for Economic and Policy Research, cautions against too much enthusiasm. “[T]he growth reported for April was unbalanced with 34,000, more than a fifth of the total, coming from employment services,” he wrote in a statement Friday. “There was also a disturbing decline in the length of the average workweek of 0.2 hours…That is equal to the largest drop since the recovery back began in 2009. In short, this report is at best a mixed picture.”

Plus, as the Center on Budget and Policy Priorities has a points out, the current share of the population that is employed is still well below what it was before the recession:

Part of that is because of an aging population, CBPP says:

But the decline also reflects to an important extent an ongoing dearth of good job prospects. Some people retire earlier than they otherwise would or go on disability when they might be able, in a stronger job market, to find a job that accommodates their disability. Others become discouraged about their job prospects and stop looking until conditions improve. The unemployment rate doesn’t reflect those decisions; to be counted as officially unemployed a person must be actively looking for work. But many of those people would start looking for work again if they thought jobs were available.

Sequestration, the across-the-board budget cuts that went into effect a couple months ago and hit everything from defense to Head Start programs, may also be hampering job growth. The budget cuts helped reduce government employment by 11,000 jobs in April. As the New York Times reports, “Economists have been warning that the economy—and job creation—will slow in the second-quarter, largely as a result of fiscal tightening in Washington…The mandated budget cuts, known as sequestration, officially went into effect in March, and if they continue, layoffs could increase.”

Krueger echoed this, and called for Congress to take action to stanch the bleeding. “Now is not the time for Washington to impose self-inflicted wounds on the economy,” he said in his statement. “The administration continues to urge Congress to replace the sequester with balanced deficit reduction, while working to put in place measures to create middle-class jobs, such as by rebuilding our roads and bridges and promoting American manufacturing.”

Diane Swonk, chief economist for Mesirow Financial in Chicago, told the New York Times, “If the government simply did no harm, we could be at escape velocity.”