The American economy added 88,000 new jobs last month, but about 90,000 of those jobs were needed just to keep up with population growth, so net job growth was actually slightly negative at -2,000 jobs. That’s terrible. It’s yet another spring swoon, but even earlier than usual. Ever since the end of the Great Recession we’ve been stuck in an odd pattern where employment growth looks promising in winter and then falls off a cliff in spring, but usually the dropoff doesn’t happen until April or May. We’re early this year.

Workers continued to drop out of the workforce in large numbers, so the labor force participation rate declined by 0.2 percentage points to 63.3 percent. As a result, despite the terrible jobs numbers the headline unemployment number actually went down to 7.6 percent. The private/public breakdown of the employment numbers followed the same trend as it has for the past few years, with the private sector gaining 95,000 jobs and the public sector losing 7,000 jobs. The size of government continues to decline.

Some of this bad news may have been due to the fiscal cliff deal in January, and the end of the payroll tax holiday, but it’s probably too early for any of it to be due to the sequester. However, we can expect that to start biting in April and May. Nice work, Congress.

All in all: yuck. 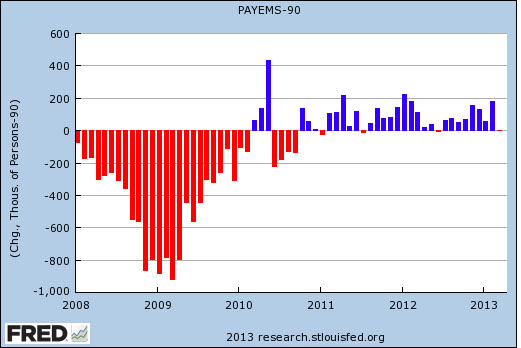