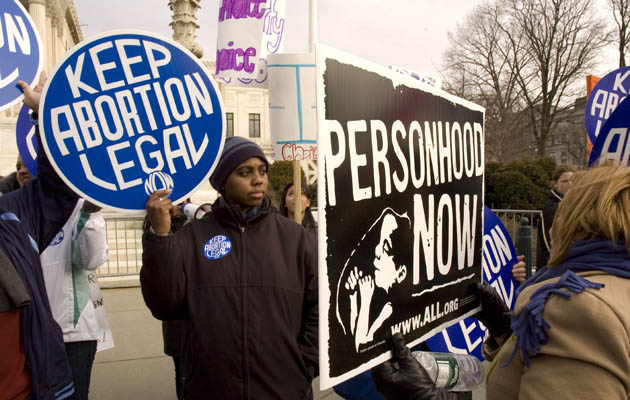 Jane Roe never had an abortion. In fact, she is not even pro-choice. Her real name is Norma McCorvey, and it’s been 40 years since she was the anonymous plaintiff in the Supreme Court case that eventually became the landmark Roe v. Wade decision.

McCorvey’s legal pseudonym is shorthand for a defining victory of the pro-choice movement, yet she has dedicated most of her life to the pro-life movement. She is a symbol for all that was won and all that has been lost in the decades of culture war—a conflict that has unmoored our nation’s public discourse on abortion.

Norma is like a lot of people who regularly shift their views and allegiances surrounding abortion. These changes show up in opinion polls, and activists on both sides regularly use them to claim that their side is capturing the hearts and souls of Americans. But, the truth is that our hearts and souls have been waiting for the politics to catch up.

Is that starting to happen? One hopeful sign: Near the 40th Anniversary of Roe v. Wade, Planned Parenthood has done what has seemed unimaginable for a cultural titan: they embraced the grey area that polls show most Americans want to talk about and claimed its political strength. Two weeks ago, reported Jezebel’s Katie Baker, the organization announced that it “is abandoning the limiting and confusing terms ‘pro-life’ and ‘pro-choice’ in hopes of reaching more women who don’t identify as ‘pro-choice’ but still support and need their services…When Planned Parenthood polled Americans to figure out how they felt about the labels, the results were confusing, because people found the labels confusing.”

Already, this shift is evident in a new Planned Parenthood online advertising campaign. Here is an example: 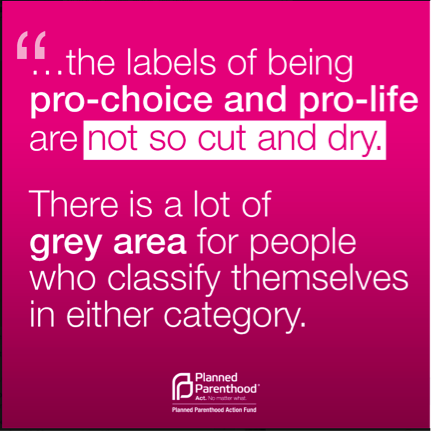 Planned Parenthood is charting a new path.  Yet as the organization will soon discover, living in the grey area is no walk in the park. It demands daily decisions to prevent slipping into dogma, despite tremendous public pressure to do the opposite.  What will Planned Parenthood say to a journalist who is looking to use conflict over abortion to make a good story? How will Planned Parenthood create space for a woman who regrets her abortion to share her story and feel heard? Will Planned Parenthood venture beyond laws and policies and participate in conversations about the experience of abortion in our lives? The reality is that while everyone hates the war, it is the only thing most people know.

I understand the challenges of the grey area well because it has been my home for the last decade. I’m the founder of a pro-voice organization called Exhale, created by women who have had abortions, and our loved ones, to transform conflict about abortion into peace.  We listen to and accept the stories and experiences of women and their loved ones without judgment and without labels.

I’ve been evangelizing the benefits of the grey area since Exhale started, but the transparency, clarity, and publicity of Planned Parenthood’s decision to abandon labels still came as a major surprise. I hope one result of their decision is that Exhale will no longer be asked which side we are on. When the most well-known pro-choice organization in the world takes this kind of stand, it’s a game-changer.

What happens next is not just the responsibility of Planned Parenthood. It’s the duty of everyone who’s ever bemoaned the rigid boundaries and simplified labels of the political debate. Here is a primer on how to live in the grey area:

Creating a new cultural climate around abortion is an opportunity to step away from the conflict and help build what’s next. Seize it.