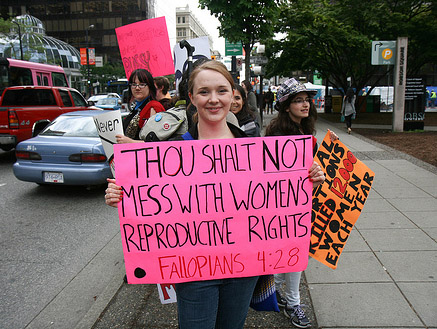 Tuesday is the 40th anniversary of Roe v. Wade, the Supreme Court decision that guaranteed a constitutional right to abortion throughout the United States. To mark the date, we’ve posted my dispatch from Jackson, Mississippi, where women may soon be unable to exercise the right Roe v. Wade guaranteed them, because the state is threatening to close its last abortion clinic.

Last April, Mississippi passed a new law requiring all doctors performing abortions to have admitting privileges at a local hospital. The two doctors that provide abortions at JWHO live out of state and don’t have those admitting privileges, although the clinic already has a relationship with a local obstetrician who can admit women to the hospital in case of an emergency. When the law passed, the clinic knew it would not be able to comply. The local hospitals in this largely anti-abortion state refused to grant admitting privileges to abortion providers. A judge gave the clinic until mid-January to apply, but, as expected, no hospital would grant the privileges.

This was, I should note, the point of the law. Upon signing the legislation, Republican Gov. Phil Bryant called it “the first step in a movement, I believe, to do what we campaigned on—to say that we’re going to try to end abortion in Mississippi.”

Now Jackson Women’s Health Organization could be closed very soon. Last week, the Health Department completed its inspection and determined the clinic is not complying with the new law. This was expected; the clinic’s legal representatives from the Center for Reproductive Rights filed a motion asking the court to block enforcement of the law because it could not comply. The inspection begins the legal process to revoke the clinic’s license, but actually doing so will take until the first week of March, according to the clinic’s lawyers. The clinic is briefing the judge later this week, and expects that there will be a hearing or some sort of decision before March.

The goal in highlighting the Jackson Women’s Health Organization is to illustrate the state of abortion care 40 years after Roe. Mississippi is the most extreme example of a state where lawmakers have introduced restriction after restriction in the past decades, pushing providers to the point where they have one clinic and zero in-state abortion providers. Perhaps unsurprisingly, the state has the lowest abortion rate in the country.

Many people will say, “Oh yeah, well, it’s Mississippi, what do you expect?” But there are other states that aren’t too far away from this reality. Both North and South Dakota are also down to one clinic and zero in-state providers. The number of abortion providers in the country has declined 38 percent from its peak in 1982, according to the National Partnership for Women & Families. Meanwhile, states have passed a record number of new abortion restrictions in the past two years: 92 new laws in 2011 and 43 in 2012. So although many women may have the right to access abortion, the actual opportunity to do so is becoming harder to come by.