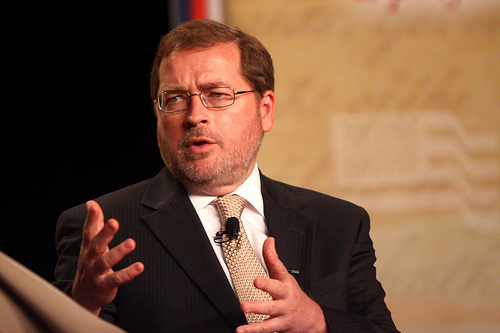 Over the long holiday weekend, four top Republicans in Congress said they would not be bound by their signing of the conservative activist’s pledge not to raise taxes on their constituents in any way, shape, or form. These lawmakers have broken with Norquist at a crucial moment: On Monday, members of Congress restart their effort to hammer out an agreement to avoid going off the so-called “fiscal cliff” on December 31.

Sen. Saxby Chambliss (R-Ga.), ranking member on the Senate select committee on intelligence, dismissed Norquist’s pledge during a Thanksgiving Day interview with a Macon, Georgia, television station. “I care more about my country than I do about a 20-year-old pledge,” Chambliss said. “If we do it his way then we’ll continue in debt, and I just have a disagreement with him about that.”

Rep. Peter King (R-N.Y.), who chairs the House homeland security committee, said he agreed with Chambliss. Standing by an anti-tax pledge he signed decades ago, King argued on NBC’s Meet the Press, “is just bad economic policy. “A pledge you signed 20 years ago, 18 years ago, is for that Congress,” King said. “For instance, if I were in Congress in 1941, I would have signed a declaration of war against Japan. I’m not going to attack Japan today. The world has changed, and the economic situation is different.”

Sen. Lindsay Graham (R-S.C.) said on ABC’s This Week on Sunday that he agreed with Norquist on not raising tax rates, but believed—unlike Norquist—that other ways of raising tax revenue are fair game. “I think Grover is wrong when it comes to we can’t cap deductions and buy down debt,” Graham said. “What do you do with the money? I want to buy down debt and cut rates to create jobs, but I will violate the pledge, long story short, for the good of the country, only if Democrats will do entitlement reform.”

And Sen. Bob Corker (R-Tenn.) told CBS’ Charlie Rose on Monday that he was “not obligated on the pledge.”

Norquist, for his part, has fired back by saying that lawmakers are bound to their constituents, not him, on their promises to oppose tax increases in any form. As for King, Norquist told CNN’s Soledad O’Brien on Monday that King “knows full well that the pledge that he signed, and others have, is for while you’re in Congress. It’s not for a two year period.”

This is hardly the first time Republicans have made noises about wiggling out of Norquist’s pledge. But could this time be different? Members of Congress are now staring down the expiration of the Bush-era tax cuts and a potpourri of automatic spending cuts that could total more than $800 billion in 2013. That includes a $55 billion cut to defense spending and $55 billion more shaved off of domestic programs.

Republicans don’t want these scheduled cuts to become a reality. The defense cuts and the expiration of the Bush-era tax breaks could be enough to nudge Republicans into ditching Norquist’s pledge. If they do, it’s Norquist, whose political currency depends on the pledge and its adherents, who stands to lose the most.