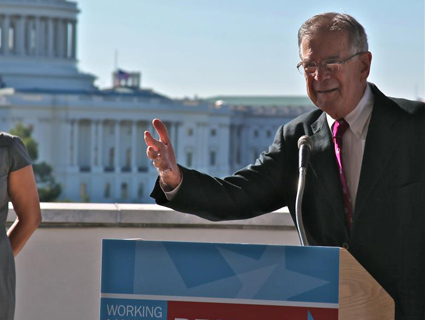 In 2003, the San Francisco Chronicle sized up Rep. Pete Stark, a California Democrat then serving out his 16th term, thusly: “Only a politician who assumes he has a job for life could behave so badly on a semi-regular basis by spewing personalized invective that might get him punched in certain East Bay taverns.” That was nine years ago. But Stark, comfortably situated in a deep-blue East Bay district, really did seem to have the seat for life, affording a level of job security that allowed him to comfortably do things like threaten to throw reporters out of windows and call a female Republican colleague a “whore.”

In 2011, though, California introduced a new open primary system, in which the top two finishers advance to the general election regardless of their party—which meant that, for the first time in forever, Stark faced serious competition. The result: A six-point loss on Tuesday to Alameda County prosecutor Eric Swalwell.

Stark, though, didn’t go out quietly. In a desperate bid for a 21st term, he launched a campaign built on a series of totally unsubstantied claims about his opponent, the local media, and anyone who crossed him. Via the San Francisco Chronicle:

In the latest episode raising questions about the erratic behavior of California’s longest standing Congressman, a former California State Assembly Majority leader said Tuesday that East Bay Democratic Rep. Pete Stark erupted in an angry tirade—questioning his sanity, threatening his livelihood and even vowing to call social workers to check on his kids—after he informed Stark he would endorse his opponent in the November general election.

Elsewhere, he launched 100-percent false arguments at the Chronicle itself, sourcing the claims to his 16-year-old son:

In a Tuesday meeting with the San Francisco Chronicle editorial board, [Stark] wrongfully accused Debra Saunders, a Republican who writes the paper’s “Token Conservative” blog, of having donated to the campaign of his primary opponent, Eric Swalwell. When asked to provide evidence for his claim, Stark paged through a pile of research materials (which he oddly said had been prepared by “a 16-year-old investigative reporter”—his own son) before admitting he had incorrectly named Saunders. He then tried to point to former Dublin City Councilwoman Claudia McCormick and claimed she worked for the Chronicle, but that was wrong, too.

Catrina said he was shocked when his phone started “ringing off the hook” this week after he was named in an attack mailer from Stark that claimed he was one of the “shady,” big-money “developers” who have donated to Swalwell, a Dublin city councilman.

“I’ve never developed anything in my life,” said Catrina, who is on the board of directors of the California Association of Realtors.

Despite the fact that allegations that Swalwell was being bribed by developers were unsubstantiated, Stark erupted at his opponent during an April debate:

Stark, still seated at the dais at the Hayward City Council chambers, reportedly called Swalwell a “fucking crook” as they shook hands.

When contacted later by phone, Swalwell confirmed the exchange with The Citizen while adding Stark also called him a “slimeball” and told him “you’re going to jail.”

That was in addition to calling his opponent a “pipsqueak” and a “junior leaguer.”