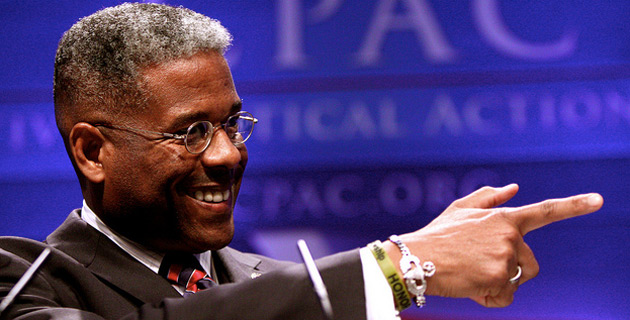 Update, Saturday November 10: Rep. Allen West is refusing to concede to Democratic challenger Patrick Murphy, despite appearances that he has lost his reelection bid in Florida’s new 18th Congressional District.

If Rep. Allen West, the tea party Republican from Florida, were a movie, he’d be the 1989 Dolph Lundgren action flick Red Scorpion: loud, anti-communist, controversial, funded by the right, and hugely unnecessary.

But that movie had horrible dialogue and starred Dolph Lundgren; Allen West, on the other hand, is a one-man puppy mill of classic one-liners, and has a pugnacious star quality to boot!

Check out this collection of his greatest hits, which plays out like scenes from the freakiest action epic that was never made: It’s got tyrannical government, Islamist militants, jingoistic insurgents, nationwide tumult, lots of tough talk and wisecracks, and—most importantly—bayonets.

1. “Take your pro-Hamas butt and get the hell out of my country.”

2. “Come on, white people. You should get mad.” (referring to a “racist” tanning tax in Florida)

3. “I’ve been on the battlefield, my friend. Don’t try to blow sunshine up my butt…!”

4. “Those little snippy little Chihuahuas that are coming up on my ankles? I’m gonna shoo them all away!”

5. “Give me that damn gavel!” (re: then-Speaker of the House Nancy Pelosi)

7. “It’s okay to come out here and cheerlead. But you better get your butts out there and understand there’s a fight and you better be willing to fight for this country…The United States of America was founded by the original insurgents.”

8. “But if you’re here to stand up, to get your musket, to fix your bayonet, and to charge into the ranks, you are my brother and sister in this fight…You need to leave here understanding one simple word. That word is: ‘bayonets!'”

11. “One thing that a warrior loves is the smell of fear and desperation in his adversary.”

12. “I want to close by saying this: I’m the liberal’s worst nightmare.”