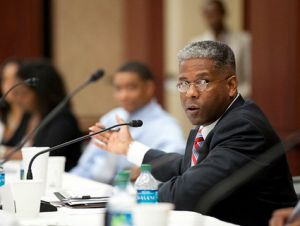 That brings us to Rep. Allen West (R-Fla.), a bomb-throwing tea party rock star who’s moving into a new district that gave 51 percent of its vote to Barack Obama in 2008, and is considered to be one of Democrats’ top targets this fall. West has $3.3 million on hand for the fall—an enormous sum for a House candidate at this stage in the race. Not coincidentally, though, the two biggest fundraising hauls from Democratic House challengers nationwide came from the likely nominees in the district West currently serves in (Fla.–22), and in district he’s moving into (Fla.–18).

So what do you do if you’re Allen West? You keep on keeping on. Here’s a Facebook note he posted last week:

Here we go again, the artful dodger, President Barack Hussein Obama, bribing the electorate with political gimmicks. We are witnessing a political propaganda program of Orwellian proportions designed to manipulate and deceive the American people. This is so reminiscent of the Twilight Zone episode “To Serve Man”. Obama and his liberal progressive disciples are the modern day Kanamits. My warning to you all, don’t fall for the intellectually dishonest rhetoric and become post-election day dinner America!

What is a Kanamit? The Broward–Palm Beach New Times helpfully informs us that the Kanamit were “a race of nine-foot-tall aliens that come to Earth and cure famine, blight, and nuclear warfare.” But that was all just a ruse for their real goal: “their kindness is really just a not-very-elaborate ruse to fatten up the human race so they can be carted back to the Kanamit home planet to be eaten. A Kanamit book called To Serve Man that was discovered by the humans turns out not to be about helping man at all—it’s a cookbook.” It’s people!

Here’s the pivotal scene from the episode, now that I’ve spoiled it for you: