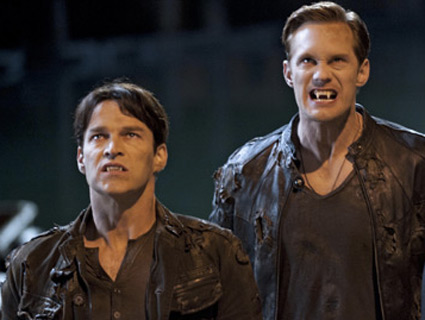 This review contains a few mild spoilers for the previous (fourth) season of True Blood.

The fifth season of True Blood (premiering Sunday at 9 p.m. EST on HBO) begins by giving its audience more of exactly what it loves: rural nihilism and supernatural sleaze pumped chock-full of allegory and Southern charm. Augmenting the cast of usual players (Sookie, Bill, Eric, Jessica, Sam, you know the rest) are more werewolves, more loose Louisiana sorority sisters, and even more proud “gay vampire Americans.” The burning questions left unanswered at the end of Season 4 are promptly addressed. Did that shotgun blast to the brain actually kill off Tara? What the hell is up with Reverend Steve? Is vampire king Russell Edgington definitely back to unleash more corybantic fury?

If you’re a fan of the show, chances are you don’t need much convincing, but here it is regardless: Tune in—the show hasn’t stopped being addictive, delirious fun, and the melodrama and viscera hits just as hard as last time around.

In the interest of not spoiling too much, the new season is unique in that it explicitly incorporates vampire theology, derived from the “Original Testament” predating Judaism and Christianity. The Authority—the ruling junta comprising the world’s seven most powerful vampires—is thankfully given a more central role in this season, when in others it had been kept at the narrative periphery. The Authority’s efforts to crack down on the insurgent “Sanguinista movement” has shades of both McCarthyism and the war on Al Qaeda, continuing True Blood‘s streak of slyly topical story arcs. (LGBT and civil rights, extremist environmentalism, Iraq PTSD, and the drug war have all already gotten the True Blood treatment.)

“Fundamentalism is a dead end, and I won’t fucking have it!” rumbles Roman Zimojic, the newly introduced “guardian” of the Authority (played with pitch perfect, towering menace by Oz, SVU, and Harold & Kumar vet Christopher Meloni). For what it’s worth, the season’s feral, dogmatic Sanguinista vamps—itching to instigate a civil war within the global bloodsucker community—were inspired by none other than…failed 2012 Republican presidential candidate and tea party darling Michele Bachmann.

Here’s series creator Alan Ball‘s two cents on the congresswoman from Minnesota, via a recent issue of Entertainment Weekly:

My first instinct about going into religion and politics was from watching Michele Bachmann, who thinks she has a direct line to God. What would happen if she became president? A lot of right-wingers would like to see a theocracy in America. From there we thought, “What would a vampire theocracy be and how would you justify it? What kind of impact would it have on humans?”